Over the weekend, the annual Monterey Car Week car auction took place. The previous record for a Monterey Car Week auction total was $395 million, which was achieved back in 2015. When all the final gavels had been struck this weekend, $456 million worth of luxury cars were auctioned off, many of which were sold at record prices for their respective models.

Record prices were set for a Bugatti EB110, a Lamborghini Countach LP500, A Ferrari F40, a Ferrari F512M and, a personal favorite, a Ferrari F50.

If you're a guy between the ages of 35 and 45, there's a very good chance you grew up absolutely drooling over the Ferrari F50. You may have had an F50 poster on the wall or a model F50 on your desk. I had both.

The Ferrari F50's posted sticker price was $475,000, which is around $876,000 in today's dollars. But you couldn't simply walk into a dealership and plop down a half million in cash to drive off with one. Ferrari hand-picked the lucky 349 people who received F50s. Buyers had to be known and liked by the company. Which meant they had to already own a bunch of Ferraris. Therefore, the true "get in" price was a couple million bucks and years of showing the powers-that-be back in Italy that you were going to treat this work of art with the respect it deserved.

You also didn't buy the car. F50 owners were locked into a multi-year lease to prevent buyers from flipping them right away. 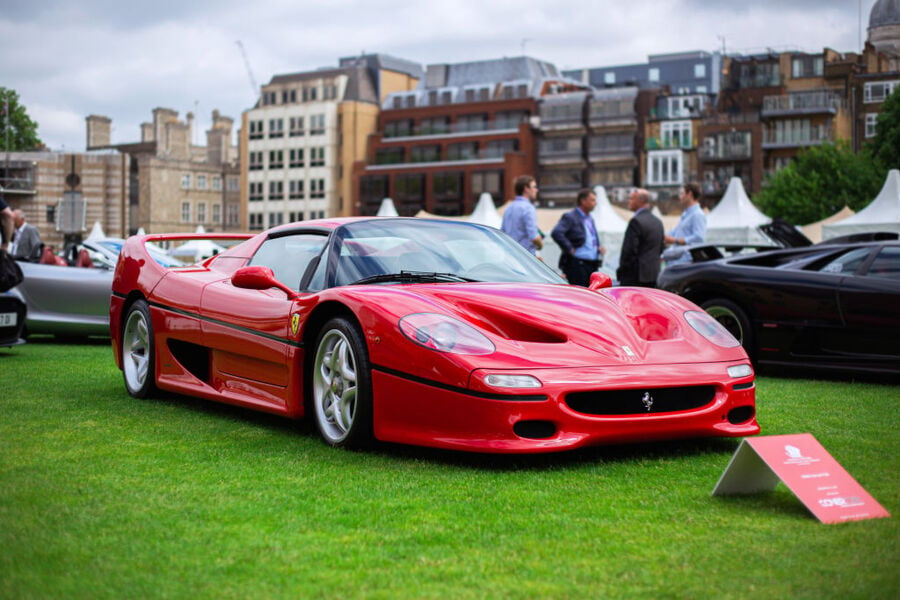 The Ferrari that was sold at auction in Monterey over the weekend is chassis #104220. According to its auction listing page, this model was completed on February 13, 1996. It is one of the 55 F50s that were built for the US market.

After being completed, this F50 was delivered by Ferrari of North America to Beverly Hills Sports Cars, which then passed it on to a luxury car broker named Nadir Amirvand. Amirvand quickly found an eager buyer named…

Tyson, who had JUST been released from a four-year prison stint, was certainly a known-buyer to the Ferrari bosses back in Italy. Over the course of his meteoric boxing career, Mike put together a world-class car collection that included a half-dozen Ferraris and around 100 cars in total.

Unfortunately, Mike's lavish spending outpaced his earnings and by 2003 he had declared bankruptcy. After earning over $300 million in the ring, according to his 2003 bankruptcy filing Mike was $23 million in debt.

Perhaps in anticipation of his pending financial problems, Mike sold his F50 in 2001 to Kevin Marcus, and early employee of a pre-Google search engine called InfoSpace. Kevin went to work at InfoSpace in 1996, straight after college. He even slept on the office floor for a period because he couldn't afford an apartment in Seattle.

InfoSpace went public on December 18, 1998. The share price ended its first day at $46.72 a share. As a result, Kevin and fellow ground-floor employees were instant millionaires. Kevin was 23 years old.

As the dotcom bubble expanded, by March 2000 InfoSpace's share price soared to an all-time high of $1,200 per share. At that level, Infospace had a market cap of $31 billion.

In 2005 Kevin sold his F50 to a collector in Atlanta for an undisclosed price. A few additional owners ensued before this weekend's auction, as did a handful of extremely expensive services. Today the Ferrari has 6,200 miles.

When the final gavel struck on Sunday, Mike Tyson's Ferrari F50 sold for…

Though that's a bit less than the $5 million the auction house projected, it's about $20,000 more than the previous record for an F50 which was set in March 2022.

The new owner has not been revealed yet. To quote the great Shaggy, unfortunately, it wasn't me.

Congrats to you whoever you are!