The Amazing History Of A $16.5 Million Ferrari

Many classic cars have an interesting story behind them, but the story of this Ferrari is amazing. A cherry red 1954 Ferrari 375 Plus racer has been the subject a 16-year legal battle that will hopefully be over soon. The battle for this Ferrari involves multiple owners and gets somewhat complicated. This Ferrari is worth fighting for; it last sold for $16.5 million!

It all started when a guy named Karl Kleve bought the chassis for $2,500 back in 1958. Kleve was the Ferrari's last undisputed owner and he purchased the car's damaged body from the heir to the Kleenex tissue fortune, Jim Kimberly. Kleve was a U.S. Army engineer and worked on the Manhattan Project during World War II.  After serving in the Army, he became a designer, artist, and author.

Kleve's car collection started with his mother's 1936 Cadillac and grew rapidly from there. His Ferrari sat outside of his home on a trailer for three decades as part of a huge collection. His neighbors even started to complain, which led to a court order for Kleve to clean up his yard. Perhaps that is why he didn't notice when his Ferrari Plus was stolen sometime in the late 1980s. 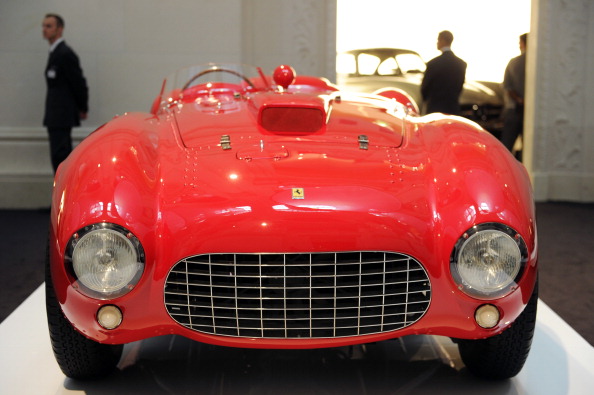 The Ferrari turned up in Antwerp and was acquired by a Belgian trader. It was impounded by authorities so they could determine its ownership history, when it was reported stolen by Kleve. The powers that be sided with the trader and then it was sold to another Belgian named Jacques Swaters. Swaters was a close friend of Enzo Ferrari and had his own Ferrari dealership. He was also a former racing driver who spent years restoring this rare luxury vehicle. Kleve finally tracked the car down in 1999 and Swaters agreed to pay him $625,000 to retain possession of it.

After Kleve and Swaters had both passed away, Swaters' daughter filed a lawsuit that argued that Kleve had voided a sales agreement because he withheld some of the car's parts. There were other claims of ownership filed by a resident of Ohio and a United States citizen living in Switzerland. In 2013, the four parties came to an agreement to "extinguish all claims and counterclaims." They agreed to sell the car through the auction house Bonham's and split up the proceeds from the sale of the car.

This time, the car was purchased by the founder of Victoria's Secret, Les Wexner, who paid $16.5 million for it! Wexner purchased the car at the Goodwood Festival of Speed, but then sued Bonham's because he was not told that about the unresolved ownership disputes. The lingerie tycoon demanded a full refund as well as damages. The lawsuits didn't stop there, because Bonham's sued Kleve's daughter Kristine as well as a Paraguayan car dealer who sent the auction house a letter of ownership for the Ferrari three days before the big sale. Bonham's agreed to pay the man two million Pounds of hush money so they did not have to cancel the auction.

Finally, the legal proceedings are scheduled to come to a close in September when all four lawsuits will be decided by a judge in London. The car everyone seems to be fighting over is one of only 375 models made by Ferrari that year, and only four of them are left intact. The other three cars' owners include fashion giant Ralph Lauren and candy billionaire Giorgio Perfetti. The Ferrari 375 Plus has a top speed of 174 miles per hour powered by an engine with 330 horsepower.