Amazing Car Of The Day: The Ferrari Testarossa

One of the Ferrari Tesatarossa's from Miami Vice is being put up for auction, but what makes these cars so special? The Ferrari Testarossa is a luxury sports car that was made by Ferrari. This car first went into production in 1984 and succeeded the Ferrari Berlinetta Boxer. The Testarossa was produced in two generations: the first was produced between 1984 and 1991 and the 512 TR and F512 M were produced from 1992 to 1996. The Testarossa has been called an iconic 80's sports car and its poster hung in many dorm rooms back in the day. Here is a closer look at this Amazing Car Of The Day: The Ferrari Testarossa.

The Testarossa debuted at the Paris Auto Show in 1984. The car was designed by Leonardo Fioravanti, Ian Cameron, Emmanuele Nicosia, Guido Campoli, and Diego Ottina with Pininfarina and is a 2-door berlinetta. The Ferrari Testarossa features a 4.9 liter Ferrari Colombo flat-12 engine. Its top speed is 180 miles per hour and it can go 0 to 60 mph in 5.2 seconds. 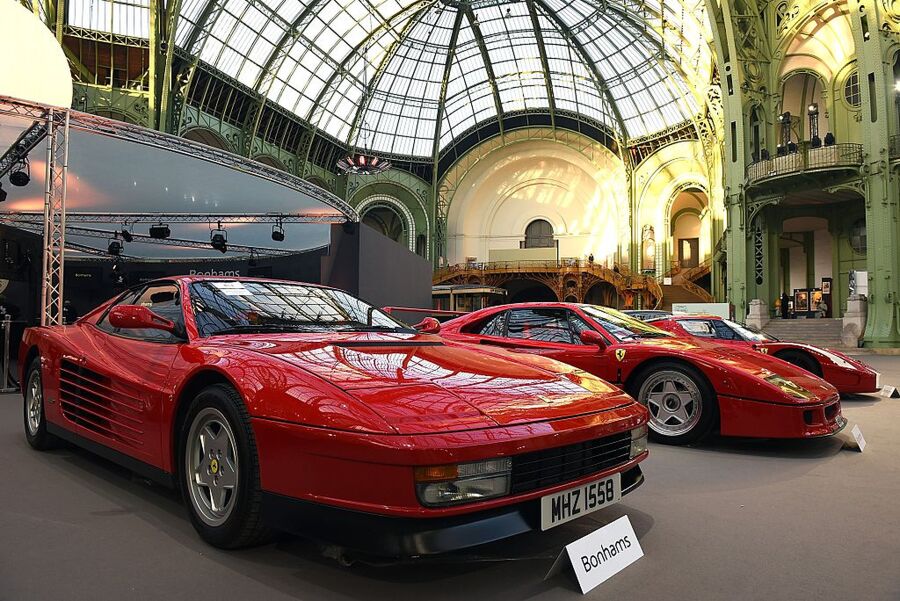 The original Testarossa was re-engineered for 1992 and was then released as a completely new car called the 512 TR. Derivatives of the Testarossa include the Ferrari Mythos, Colani Ferrari Testa d'Oro, Ferrari FX, FZ93, and F90. The Ferrari Testarossa was one of the most-produced Ferrari models with 10,000 being made. The F512 M retailed for $220,000 in 1995.

A pair of black 1968 Testarossa's were painted white for Miami Vice in order to show more contrast on low definition televisions from the 1980s. One of them sold in 2014 for $1.75 million and the second will be auctioned off by Mecum in Monterey, California in August 2015 if anyone wants a really cool car with a lot of TV history included.

The Ferrari Testarossa is also very popular among celebrities. Sir Mix-a-Lot owns one as part of his luxury car collection from his one hit wonder "Baby Got Back." Back in 1987, MCA Records decided to give Sir Elton John a red 1987 Testarossa for his 40th Birthday. John sold the car at auction in 2012 for about $200,000. Other celebrities who have owned a Testarossa include Vince Neil, Tom Selleck, Mick Jagger, and Richard Pryor. The Ferrari Testarossa seems to be popular among musicians – maybe they like the powerful hum of its engine.