Amazing Car Of The Day: The Aston Martin DB9 GT

The Aston Martin DB9 GT is a luxury grand tourer coupe or convertible that appeals to celebrities and everyday drivers alike. The DB9 GT has been produced since 2004 and was designed by Ian Callum and Henrik Fisker. This car appeals to drivers and critics and has received strong ratings in regards to its driving expensive.  The DB9 has also been adapted for sports car racing and won in its debut race. Here is a closer look at this Amazing Car Of The Day: The Aston Martin DB9 GT.

The DB9 features a 6.0 liter V12 engine with up to 517 horsepower borrowed from Aston Martin's V12 Vanquish and a six-speed automatic or manual transmission. This vehicle is mostly made of aluminum and uses a VH platform chassis which is shared with Aston Martin's DBS. Many variations of this car exist, but it typically has a top speed of about 183 miles per hour and can go from 0 to 60 mph in 4.1 seconds.

The DB9 succeeded the DB7 in 2004 and was Aston Martin's first model to be made at their Gaydon, England facility. It debuted at the Frankfurt Auto Show in 2003 and the initials DB come from Aston Martin owner David Brown. The car maker skipped from the DB7 to the DB9 in fear that people would believe it to have a V8 engine.  Only about 1,500 DB9s were planned to be produced each year when the car was launched.

The DB9 Volante is Aston Martin's convertible version of the DB9 coupe and uses the same VH platform with a stiffer chassis. This particular version is limited to 165 miles per hour. The DB9 LM was released in 2008 to celebrate Aston Martin's GT1 win at the 24 Hours of Le Mans in 2007. There were only 124 of these vehicles authorized, or one per Aston Martin dealer, but only 69 ended up being built. Three special edition DB9s were offered in 2011: the DB9 Carbon Black, Quantum Silver, and Morning Frost. 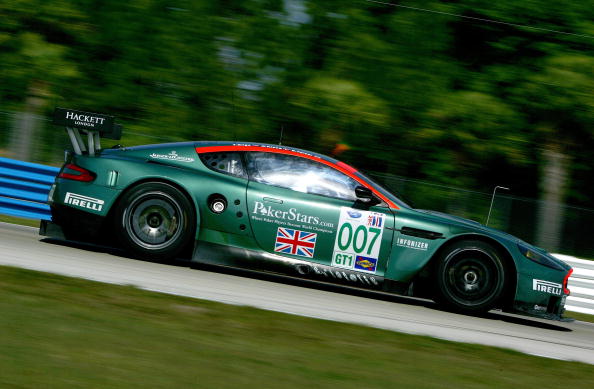 The DB9 was called "too cool" for the Cool Wall on Top Gear and Richard Hammond called its interior "one of the best known to man." The DB9 has been criticized for its handling compared to other sports cars, but its positive qualities seem to outweigh the bad. The 2016 version of the DB9 GT debuted at the Goodwood Festival of Speed and has more power than any other DB model. It will feature up to 540 horsepower and will do 0 to 60 mph in 4.4 seconds. Pricing on a 2016 Aston Martin DB9 GT9 will be just about $200 thousand.

Rap mogul Kanye West owns a DB9 and so does Adam Carolla, who had his modified by Chip Foose. Ice T has been seen driving his DB9 drop top and professional snooker player Jimmy White owns a DB9 Volante. Joe Jonas has also been seen behind the wheel of his Aston Martin DB9. This diverse group of celebrity DB9 owners goes to show that anyone can enjoy this car!