Adam Levine's Car: Will His Vintage Car Help Him on Valentine's Day?

By Paula Wilson on February 14, 2013 in Articles › Celebrity Cars

Adam Levine is doing pretty okay.  The frontman for the very popular group, Maroon 5, has amassed a massive fan base worldwide.  Maroon 5 released their first album, "Songs About Jane" in 2002, and have since gone on to sell 10 million albums in the US alone.  They have been nominated for 90 major music awards, and have won three Grammy Awards, among 24 other honors.  All of their albums have achieved Platinum or multi-Platinum status, and their most recent album, "Overexposed", netted them two more Grammy nominations.  Adam Levine has taken his fame as the face of Maroon 5, and has used it to promote various social and political causes, such as raising testicular cancer awareness, and launching his own campaign to raise awareness of ADHD.  When he's not performing, recording, or speaking to the press, he is a judge on the hit vocal competition show, "The Voice".  He has appeared in three seasons thus far, and is slated to appear in the fourth season.  Like any person who has achieved a certain level of success, Mr. Levine has made a couple of very nice purchases.  A lover of vintage cars, he has recently been seen driving around Los Angeles in a beautiful Ferrari 365 GTC. 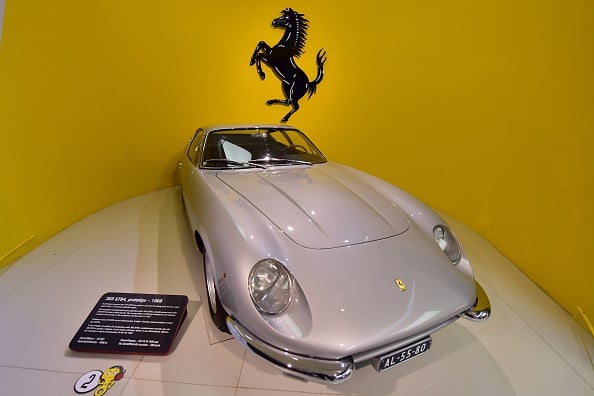 The Ferrari 365 GTC went into production in 1968.  It replaced the 330 GTC, but there were only minor aesthetic changes made between the two models, such as the placement of the vents (which were moved to the bonnet on the 365).  The biggest changes were the replacement of the 330's 4.0 liter Colombo V12 engine, with a 4390 cc V12 engine. The gearbox was also combined with the final drive in order to better balance the car.  Only 150 of the vehicles were produced, before it was replaced by the Ferrari GTC/4 in 1970.  Mr. Levine's 365 is in gorgeous condition, and probably ran an impressive price tag.  The cars sells for anywhere from $350,000 to $500,000.