Eight Gorgeous Supercars That Were All Mysteriously Abandoned

By Brian Warner on November 4, 2014 in Articles › Celebrity Cars

Can you imagine walking through an airport parking lot and seeing a Ferrari, Lamborghini or Porsche sitting abandoned, covered in dust and parking tickets? There are a handful of reasons why someone might abandon a gorgeous supercar in the prime of its life. Maybe the person had tax problems. Maybe they had legal problems. Maybe they used it as a getaway car during a bank robbery and are now living on a beach somewhere in a non-extradition country. Or maybe the car's owner was the son of a brutal dictator whose country was invaded by a foreign army. The excuses run the gamut. These eight (formerly) gorgeous supercars were all mysteriously and tragically abandoned…

There had long been rumors within the Sacramento car-enthusiast community that a barely-driven DeLorean was rotting somewhere deep in the woods two hours from downtown. In 2009, a group of adventurers using hastily thrown together maps based dozens of unconfirmed tips, finally stumbled upon the long-lost car and took these photos to prove the legend was indeed true. Hidden deep in the woods, miles from any standard hiking trail, the DeLorean was covered in what looked like 30 years worth of dust, weeds and branches. Ironically, the only thing found inside was a box that contained the car's nylon cover. No one knows how it got there or why. But most people assume it was left there in 1885 by a crazy wild-eyed scientist/blacksmith and his school teacher wife, Clara.

In September 2008, less than a month after the world economy collapsed, this Lamborghini Gallardo Spyder was found sitting in an airport parking lot in the city of Alicante, Spain. Lots of cars started showing up abandoned in Spanish airports in the wake of the financial crisis. Perhaps formerly wealthy foreigners decided it was time to get out of town and never look back. Most of the cars that were abandoned were pretty modest. But there were definitely a few Range Rovers, Mercedes, BMWs, Porsches, and of course this Lambo. To make it even worse, the mystery owner left the car in short term parking!

Only 281 Jaguar XJ220s were produced between 1992 and 1994. Brand new, they cost nearly $800,000 in inflation adjusted dollars. A model in good condition would set you back around $300k today. This Le Mans Blue XJ220 was found abandoned in Qatar at the edge of a desert. It had just 560 miles on the odometer. No one knows why it was abandoned or who abandoned it. It also disappeared shortly after it was discovered in 2009, and hasn't been seen since.

Before he married Jackie Kennedy, Aristotle Onassis was a rich Playboy in Greece who loved collecting expensive toys. In 1969, he bought this Lamborghini Miura. Unbelievably, he then gave the Lambo away as a gift to Greek singer Stamatis Kokotas. Stamatis put 50,000 miles on the car between 1969 and 1972, when the engine gave out. Stamatis shipped the engine back to Lamborghini's factory in Italy to be repaired. In the meantime, he parked the Miura in the garage of the Hilton Hotel in Athens. For some reason, no one ever thought to pay Lamborghini for their work, so the engine was kept as collateral in Italy. The body of the car sat in that Hilton parking lot for 30 years! Finally Lamborghini arranged for the engine and body to be reunited and auctioned off in 2012. It fetched roughly $480,000.

This car was originally purchased in 2007 by someone in Las Vegas.

In early 2008, the car was auctioned on eBay for $300,000. In December 2008, once again just a few months after the financial collapse, the Rolls turned up in Russia. Not in some billionaire oligarch's garage. Not in Vladimir Putin's motorcade. This work of mechanical art suddenly turned up abandoned by a railroad track in St. Petersburg. Other than the fact that the car was covered in snow and missing fenders, headlights, wheels and taillights, it was in pretty good condition. An unverified rumor says that the car's Russian owner was found dead in the trunk. Since we're talking about Russia, I believe it.

Sometime in 1990, just before the first Gulf War broke out, Saddam Hussein's son purchased a Ferrari F40 for around $700,000 in cash from a Swiss dealer. This was just one car in a huge collection that included Lamborghinis, Porsches, Ferraris, and pretty much everything you could imagine. Uday was killed by American Special Forces on July 22, 2003. A few months later, American troops discovered his Ferrari F40 outside a garage in Iraq gathering dust. 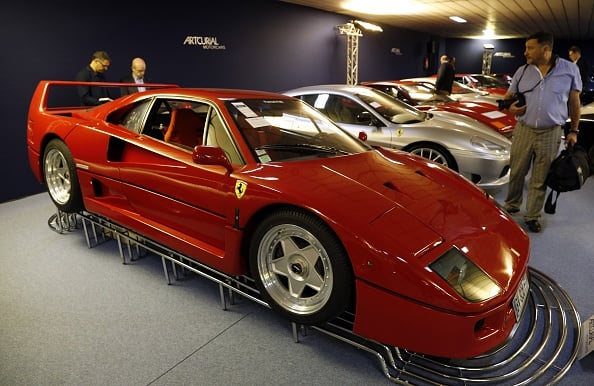 In August of 2012, this $650,000 Maybach57 was found abandoned in a parking lot in the French coastal town of Cannes. The car had been there for over four months. Tourists began writing finger graffiti with all the dust that collected. Someone even wrote "Rich Bitch" in huge letters on the back.

Ferrari only produced 399 Enzos, which have a top speed of 217 miles per hour and can go from zero to 60 in 3.14 seconds. In order to be one of the original owners you needed to own at least two other Ferraris and be well known by the company for at least 10 years. Unfortunately, after the world economic downtown that started in 2008, a bunch of Enzos started going up for sale to and the standards of ownership were greatly reduced. That explains how an anonymous British citizen living in Dubai was able to purchase one of these rare masterpieces.

Apparently the expat who bought the Enzo had a very heavy foot and rarely observed parking signs. He somehow managed to wrack up $30,000 in traffic violations and parking tickets. But I know what you're thinking, surely $30k is pocket change for someone who can afford a $1.6 million Ferrari, right? Well, turns out the money wasn't the reason the owner abandoned his Enzo in a blistering hot and dusty Dubai parking lot for 20 months. He did it to avoid GOING TO JAIL! In Dubai, unpaid debt to the government is considered a serious crime that is often punished with a jail sentence.

In order to avoid doing hard time (in what we can only imagine is a disgusting hell hole of a prison) this rich guy parked his Ferrari in a random lot then skipped town. His current whereabouts are unknown but the Ferrari sat gathering dust (and more tickets) in temperatures that frequently top 100 degrees for 20 months!