50 Years Ago A French Tycoon Hid His Car Collection In A Rural Barn. Then He Died. This Is Like A Real Life National Treasure!

By Max Savage Levenson on January 8, 2015 in Articles › Celebrity Cars

Last month, Mathieu Lamoure and Pierre Novikoff, two "motorcar specialists" from the auction house Artcurial Motorcars, were taking a drive through rural Western France. At some point during their drive, one of them spotted a barn that was set back from the road. On a whim they pulled over to explore. Right away it was clear that this barn had not been accessed by people in many many years. Perhaps even decades. What they discovered next was nothing short of magic. The kind of thing people dream about. The kind of thing that might happen to Nicolas Cage in a National Treasure movie. But not thing kind of thing that could actually happen in real life. Until it did…

As fate would have it, this barn that the two motorcar specialists stumbled upon in rural Western France happened to be hiding a literal treasure trove of decades-old classic cars. More specifically, sixty extremely rare vintage automobiles in condition comparable to the Titanic. Rusted, hidden beneath piles of magazines and blankets of dust, with weeds growing through the window frames, the cars had sat immobile for over fifty years. 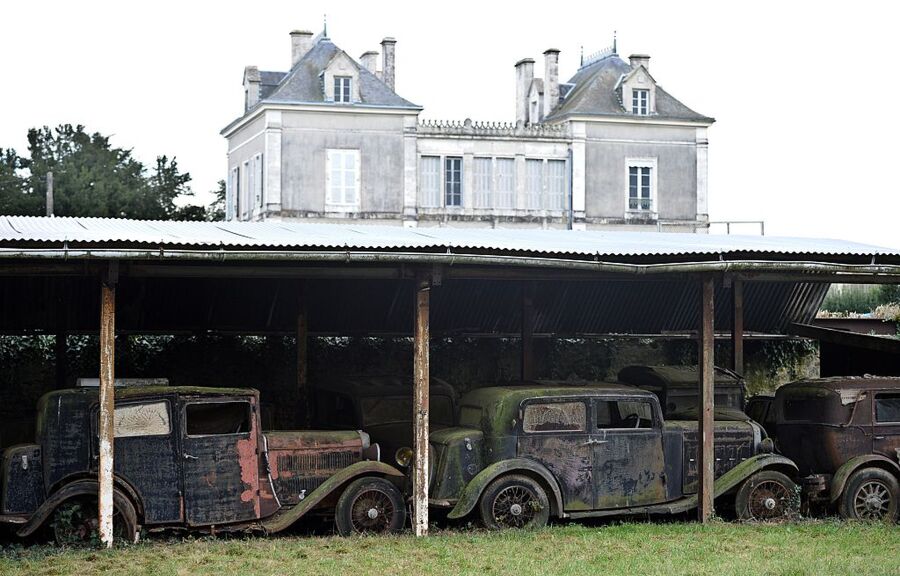 In Mathieu Lamoure's own words:

"This sort of thing doesn't happen often enough. In our jargon, we speak about 'barn finds' as cars that are intact, that have remained untouched for years, and are found again. I have to say that when we arrived here, we found ourselves overcome with emotion."

With a little investigation, the two treasure hunters discovered that the cars had originally belonged to a man named Roger Baillon. Roger was a French transportation mogul who had handpicked each car with a passion. His original collection contained dozens of cars.

Unfortunately, Baillon fell on some hard financial times during the 1970s and was forced to sell off the majority of his collection. But as many car collectors understand, he couldn't possibly give up all of his babies. So he ended up tucking away a few of his favorites in this old barn way out in the country. The cars were hidden in cast-iron cages and under buildings. They are all vintage automobiles dated from the 1930s to the 1950s. Baillon intended to one day build a museum for his collection.

Tragically, Roger Baillon died before he had the chance to tell anyone else where he had hidden his treasure. This is how the cars were lost for more than five decades. Senior specialist at Artcurial Pierre Novikoff described the scene as "somewhere between a metallic graveyard and a museum".

Although the condition of the cars is heart wrenching for automobile enthusiasts, Artcurial Motorcars is confident that they can be restored. And when that happens, they expect the collection will fetch a minimum of $18 million dollars!

A total of 60 cars were recovered. Some of the highlights include include a Hispano Suiza H6B cabriolet Millon Guiet, a Talbot Lago T26 Grand Sport Coupe Saoutchik, a Talbot Lago T26 Cabriolet Saoutchik ex Roi Faouk, a 1961 Ferrari 250 GT SWB California Spyder (found under a stack of magazines), and a 1956 Maserati A6G Gran Sport Frua. The Maserati is one of just three made and early estimates have it going for around $1.5 million. The Ferrari, which is luckily still in decent condition, is expected to fetch between $13-15 million! This Ferrari was also part of a very limited run with just 37 of these cars being made. The Talbot-Lago was owned by the Egyptian King Farouk and the Ferrari was used in a movie starring Jane Fonda.

Interested buyers can bid on these historic found vehicles at an auction held by Artcurial in Paris, France in February 2015. Cars deemed unfit for restoration will be sold for their spare parts. On a happy ending note, the benefactors of these hidden treasures will be Roger Baillon's grandchildren. Now if you'll excuse me, I need to take a ride in the country.