If All Goes According To Plan, By 2020, Michael Jordan's Annual Nike Royalty Check Will Be RIDICULOUS!

By Marvin Jules on July 7, 2017 in Articles › Billionaire News

We all know that Michael Jordan is a very rich man. In addition to being regarded by many to be the greatest basketball player of all time, MJ is also the first black billionaire athlete. Roughly half of MJ's $1.2 billion net worth can be attributed to his 90 percent ownership stake in the Charlotte Hornets (Jordan's stake is worth around $500 million, net of debt). The other major source of wealth for the 52-year-old is his deal with Nike. In 2016, the Jordan brand sold $3 billion worth of shoes in the United States alone. As a result, Jordan was paid approximately $100 million in royalties from his Jordan brand sales. While those numbers seem more than solid, wait until you hear how much Jordan's yearly royalty is projected to be by the year 2020…

Nike is the world's leading sportswear company, with a reported revenue of $30.6 billion in revenue this past year. Despite the fact that Nike has such a stranglehold on the athletic footwear market (the company has nearly 60 percent of the North American athletic footwear market), the Oregon-based company is not resting on its laurels. Nike CEO Mark Parker said at a recent investor's meeting that the company projects to hit $50 billion in annual revenue by 2020, with over half of that amount being the women's apparel business (the women's apparel business made $5.7 billion worldwide this past year).

Now to the Jumpman. According to Parker, the company wants to move the Jordan brand above being something that is limited primarily to basketball. Basketball has made up the lion's share of the Jordan brand's revenue over the past 30 years. As a result of the company's plan of taking on creating more products for other sports, Parker projects the Jordan brand to be a $4.5 billion business by the year 2020. 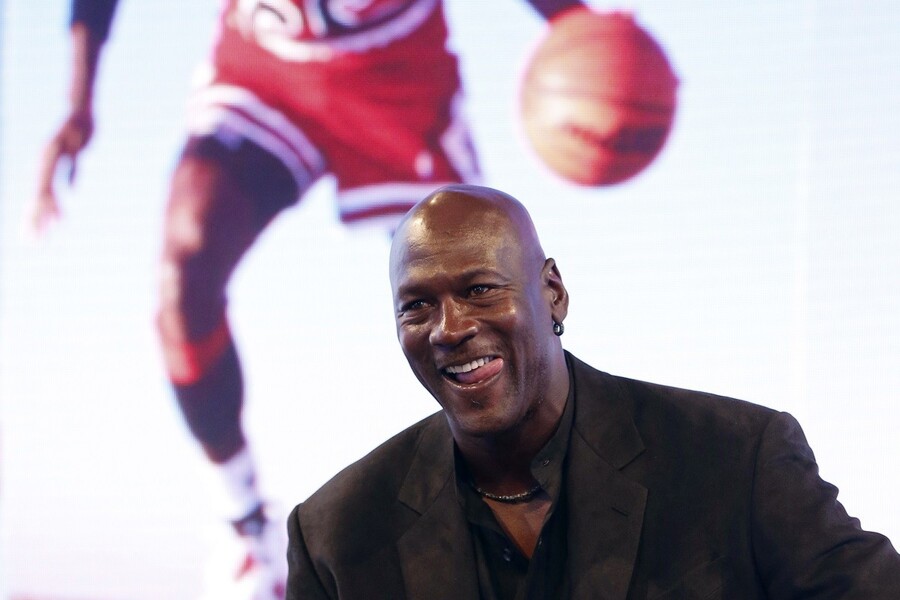 If that comes true, how will MJ's bank account be impacted? As we mentioned previously, Michael Jordan made $100 million in royalties off of the Jordan brand's $2.6 billion revenue in 2015. That equates to somewhere between a four and five percent royalty. So if we extrapolate that to Parker's projection of $4.5 billion in 2020, Jordan will likely earn around $200 million in Jordan brand's revenue in 2020.

You know what's extremely crazy about that number? During Michael's entire 15-year NBA career, he earned a total of $93 million in salary. So in other words, by 2020, just three years from now, Michael will be earning more than TWICE what he made over the course of his entire 15-year career, from his single Nike royalty payment.

Oh and in case you were wondering, despite being a massive source of revenue for Nike, Michael actually has zero influence over which athletes wear his shoes. There is actually an NBA rule that prevents Michael from being involved in negotiations between Nike and athletes. The fear is that without the rule, Michael could use his ability to offer massive shoe deals as a way to entice players into joining the Hornets.

The league does not anyone promising endorsement deals under the table in order to lure players in to coming to town. How easy would it have been for Steve Ballmer to have made a wink-wink deal with Jordan to get him to stay in L.A. or for Mark Cuban to do the same to get him to come to Dallas? Imagine the team Paul Allen could have in Portland if he promised side deals to get players to sign with the Trail Blazers.

All this makes you wonder…. what how much will Michael Jordan be worth by the year 2020 if things fall in the right place???

To figure out Jordan's projected 2020 net worth, we'll approach each asset starting with the Hornets. Based on how other NBA teams have appreciated in value over the previous 5 years, it's reasonably to project that the value of the Hornets rises to $1 billion by the year 2020. That would make Jordan's stake in the team worth $895 million.

Finally, add in his liquid assets and real estate investments, which will likely appreciate in value over the course of five years; let's say those grow to $600 million in value.

And here are a couple more crazy facts about MJ's money:

#1) He once turned down an $80 million offer to endorse a headphone company… because he apparently doesn't wear headphones!

#3) His first Nike contract paid $500k per year for 5 years. It was the largest shoe contract ever at that time and Michael had never work Nike shoes in his life before signing the deal.

#4) Michael paid his ex-wife $170 million in cash when they divorced.

#5) Michael paid $170 million for his majority stake in the Hornets.

Even though he hasn't played an NBA game in over a decade, it's safe to say that MJ is still ballin'.