By Amy Lamare on September 27, 2018 in Articles › Billionaire News

Yusaku Maezawa is the 42-year-old Japanese billionaire who has signed on to be the first commercial passenger on SpaceX's Big Falcon Rocket in 2023. His name may be unfamiliar to those in the west, but this colorful billionaire makes headlines regularly in Japan. He is the CEO of Start Today Co., which he founded in 1998 as a CD sales business in his 20s. He pioneered e-commerce in Japan. These days, he runs Zozotown, a fashion mall that sells a variety of affordable clothing brands. Zozotown's annual sales were $890 million for the latest fiscal year.

Yusaku is a character who makes headlines in Japan for his celebrity friends, his fleet of sports cars, and the way he travels in his private jet. He's a flamboyant personality in a country where that type of exuberance is not common and wealthy men usually keep a pretty low profile. 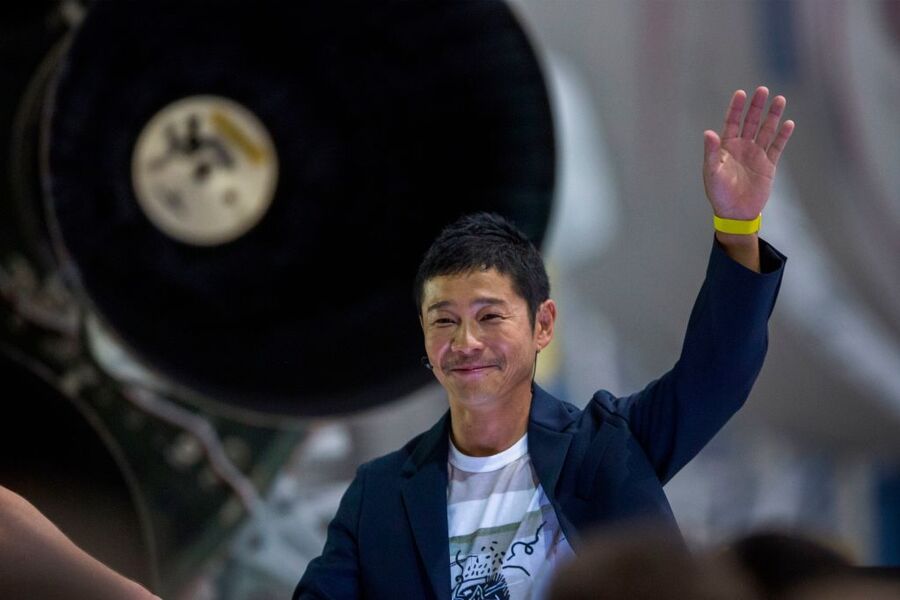 His personality and style may have been formed during the years he spent playing drums in rock bands. He played with the punk bad Switch Style, which signed with a major Japanese record label. When it came time to go to college, he declined attending Waseda University in favor of continuing to play drums. Of course, he then started a mail order business selling CDs he imported from other countries.

Yusaku is also an avid art collector. Last year he bought Jean-Michel Basquiat's 1985 skull painting for $110 million. Did he hang it in his house? Nope. He sent the painting out on a world tour. He took to Instagram to write:

"Good-bye for a while my Basquiat. I am hoping that you will be loved by people all over the world and move the hearts of people around the world. See you again soon. Have a good trip! #JeanMichelBasquiat #worldtour #imissyou."

Once the Basquiat returns home it will go to a museum in Maezawa's hometown of Chiba. Yusaku also owns works by Andy Warhol, among others.

His purchase of the Basquiat painting set a record for the highest price paid for a Basquiat painting when he bought it. He also held the previous record for a Basquiat. He paid $57.3 million for one of the artist's works in 2016. At the same auction in 2016, he also bought works by Jeff Koons, Bruce Nauman, Alexander Calder, and Richard Prince. He spent $98 million in two days on art.

Maezawa also created the Tokyo based Contemporary Art Foundation in 2012. Its aim is to support young artists. The foundation has shows twice a year. Maezawa also plans to build a museum in his hometown of Chiba to house his personal art collection.

In fact, Yusaku's journey around the moon on the SpaceX rocket is an art project. The billionaire plans to take six to eight artists with him on the rocket as part of an art project he created and is calling it #dearMoon.

Maezawa has also launched the Zozosuit as part of his Zozo fashion label. The suit is a wearable technology where customers first order a black body hugging suit that resembles a wetsuit. The suit has white dots all over it, which do a full body scan that determines the correct fit for the custom fit suit which is then produced.

Maezawa has not disclosed how much he paid for the SpaceX moon journey. He will be the first man to return to the moon in more than 50 years.