What's It Really Like Being Married To A Russian Billionaire? Just Ask Countess Alexandra Tolstoy.

Have you ever wondered what life would be like if you were a billionaire or married to one? Countess Alexandra Tolstoy can tell you. More than a decade ago, she met and fell in love with the man of her dreams. He just happened to be a billionaire, Russian oligarch, and friend of Vladimir Putin's, Sergei Pugachev. Five years ago, Tolstoy, Pugachev, and their three kids were living a life of luxury in the Chelsea neighborhood of London. They had a personal assistant, two housekeepers, two drivers, an English nanny, a Russian nanny, and a private French teacher.

Tolstoy was no stranger to privilege. As you may have guessed, she's a distant relative of author Leo Tolstoy. She's a countess. She attended an elite boarding school and became a stockbroker in London. She didn't love that job, so after a year she quit and started a travel business exploring Turkmenistan and Kyrgyzstan. In 1999 she was part of a team that spent eight months traveling the 5,000-mile length of the Silk Road. She fell in love with one of the support team members, an Uzbek showjumper named Shamil Galimzyanov. In September 2003, Tolstoy and Galimzyanov were married in the Russian Orthodox Cathedral in London. After their wedding, they moved into a small Moscow apartment. In Moscow, Tolstoy taught English to the families of several oligarchs. Tolstoy and her first husband were struggling to make ends meet. She met and befriended the billionaire Sergei Pugachev after she was hired to teach him English. In 2009, she divorced Galimzyanov shortly after the birth of her son Alexei. Pugachev was revealed to be Alexei's father. 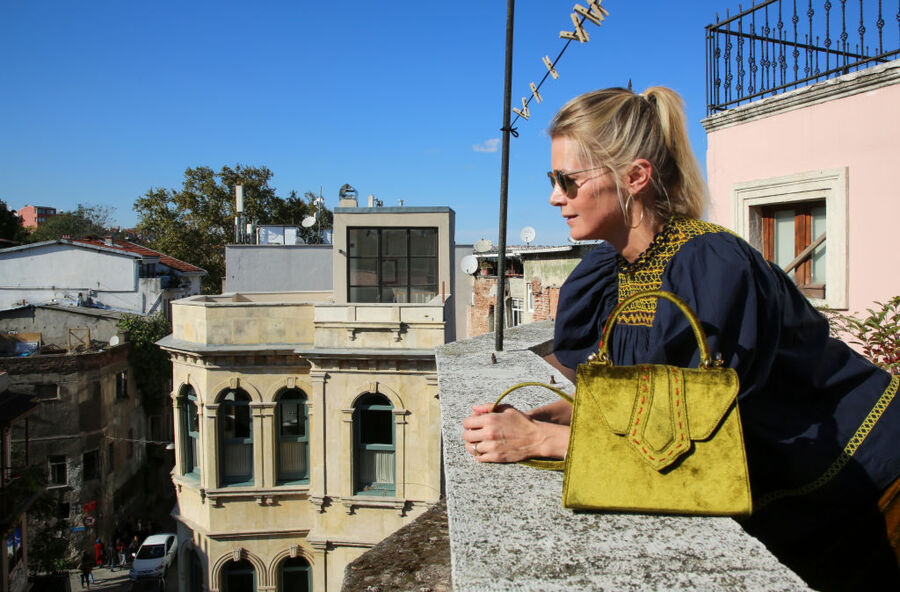 Alexandra, Sergei, and Alexei lived a life of luxury between Moscow, London, Paris, and a beachfront villa in the Caribbean. He gave her a credit card to shop with. She had a private jet at her disposal. Pugachev rose to wealth in post-communist Russia. He owned one of Russia's largest private banks, a coal mine, shipyards, and designer brands. He and Putin were friends who vacationed together. He had the nickname 'Putin's banker,' due to the loans he granted to the Russian government. However, Putin didn't approve of Pugachev's relationship with Alexandra Tolstoy. Then, in 2006, Russia passed a law giving its agents the license to kill enemies of the state abroad and set its sight on Pugachev and his billions. The government rigged the collapse of Pugachev's Russian assets, including the bank. He fled Russia amid demands that he pay back a billion dollar loan or they'd kill his family.

As we now know, Russia was serious about its pledge to kill its enemies abroad. In the years that Vladimir Putin has been running Russia, people who made billions during the first decade of Russian capitalism have been picked off systematically, one by one. They have been jailed, barred from entering the country, forced to cede their assets to the Kremlin (or flat out just had them stolen by the government and its agents), and more shadowy, murky scary scenarios that resulted in the loss of fortunes, loss of careers, and even, on occasion, loss of life. In 2012, Alexander Perepilichny dropped dead while jogging in Surrey. He'd been poisoned. In 2013, Boris Berezovsky was found dead at his home in Ascot. In 2015, Boris Nemtsov was shot dead in Moscow. In 2015, Pugachev's assets were frozen, his passport seized. Pugachev battled the Russian government from his chateau in France.

While Pugachev was in hiding from the Russian government, Tolstoy felt that things were not safe for her or her children. He asked her to move permanently to France with their kids to live as a family. Alexandra didn't want to. He hit her and locked up her passport and their children's passports in his safe so that they could not leave him. She worried that he'd kidnap their kids. Her life of luxury became a gilded cage she needed to escape from. One day in the spring of 2016, she and her kids left the chateau abruptly and never returned. She was immediately cut off financially. Russia seized her family's home and put it on the market. She was offered a deal to stay in the house for a year if she agreed not to seek any financial support from Pugachev. She had no money and no home.

Today, Pugachev lives alone in his French chateau, a decision he was forced into by the Russian government. His billions are gone. He's down to his last $70 million. He hasn't seen his children since 2016. He is still awaiting the results of his lawsuit against Russia for the loss of his assets.

Alexandra and her kids live in a cottage in Oxfordshire. She re-started her travel agent/tour guide business and has led expeditions across Kyrgyzstan. She still makes regular trips to Russia. She's resumed doing the things she loved. She's no longer under the control of her ex-husband. She no longer fears for her life or worries about her kids being kidnapped by their father. She is free. And she prefers it that way. Alexandra's mother says Sergei "brought the whole thing on himself."