What Would It Take For Elon Musk To Become The World's First Trillionaire?

By Brian Warner on January 15, 2021 in Articles › Billionaire News

As of this writing, Elon Musk is worth a bit over $200 billion. He's the richest person in the world, outpacing Jeff Bezos by around $18 billion. Elon's net worth is $170 billion higher today than it was one year ago. Exactly two years ago today to the day, the entire market cap of Tesla was just $53 billion. At that point Elon was worth around $25 billion. Where do you predict Elon's net worth will be in one year? How about two years and beyond? Is it possible that Elon Musk will become the world's first trillionaire? Anything is possible! Here's how that could happen…

When we talk about Elon Musk's net worth, it's important to remember that his fortune comes from two sources:

There's a complicated answer to this question. If all you care about is the simple answer, here you go:

Elon's unique bonus plan with Tesla has earned him $50 billion worth of additional shares. Half of those, roughly $25 billion, have been approved by the board and that's what's missing in the math above to give him a net worth of =

The other roughly $25 billion has yet to be officially confirmed and awarded by the board.

If you'd like the complicated answer, here you go, or feel free to skip down below the dashes:

Back in 2018 Elon and the Tesla board came up with a compensation plan were Elon was given a 12-level milestone bonus plan. At the time the plan was forged, Tesla's market cap was $50 billion. Every time Tesla's market cap increased by $50 billion, and stayed at that level for a sustained period, Elon was given the right to buy 1.688 million new shares of Tesla for $350 per share. The tranches go up in $50 billion increments all the way to $650 billion:

If Tesla broke a $650 billion market cap, the long story short is that Elon would have by that point been able to buy 1.688 million shares for $350 a share… twelve times. To make matters even more complicated, in August 2020 Tesla stock did a 5 – 1 split. So now every time Elon busts through a milestone, he gets to buy 8.44 million shares for $70 per share.

And please note – As we mentioned earlier in this article, Tesla's current market cap is $783 billion. Last I checked, $783 billion is higher than $650 billion… the highest milestone number. So, in other words, Elon has achieved all 12 milestones.

When it's all said and done, at some point in the next year, assuming Tesla stays above $650 billion, the board will confirm the second half of that $50 billion. At that point, by our math Elon will own around 270 million shares of Tesla. At today's share price, those shares alone would be worth:

If SpaceX's valuation stays exactly the same, $46 billion, at that point Elon's net worth will be =

If you think that's a totally unfathomable number, please remember that had Jeff Bezos never gotten divorced, today he would be worth around $256 billion.

Who knows what the future will bring for Tesla stock and SpaceX valuations, but let's pretend they both continue to explode (in a positive way… not in a rocket launch way). 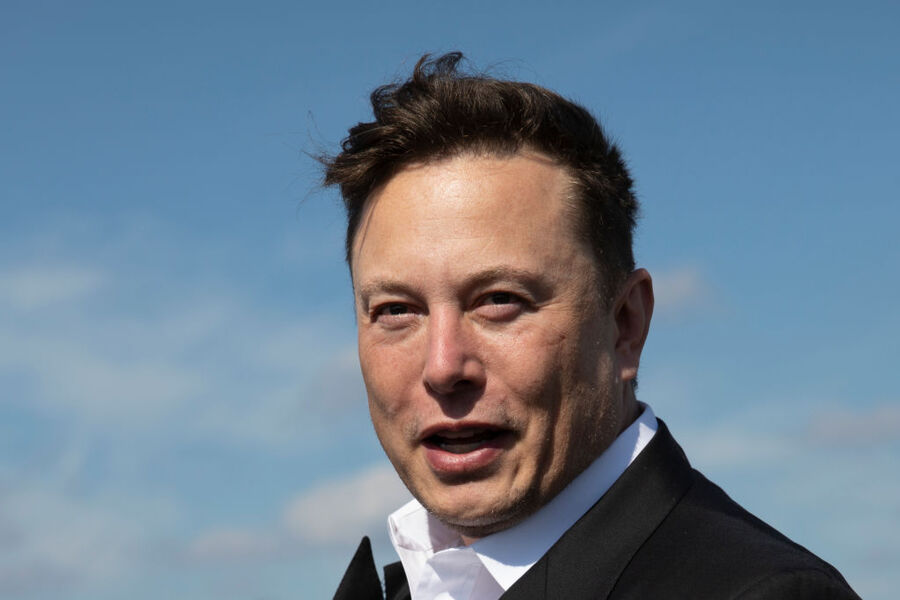 What Would It Take To Hit $1 Trillion?

Just for fun, let's say SpaceX's next big raise is at a $100 billion valuation. And let's say Elon's stake gets reduced from 48% to 40% in the process. At that level, Elon's SpaceX stake would be worth $40 billion. And let's say in the next two years a SpaceX rocket strikes gold on an asteroid, rocketing its valuation to $250 billion either in a private funding round or as a future public company. At that point SpaceX would contribute $100 billion to Elon's net worth.

Assuming we soon live in a world where Elon officially owns 270 million shares of Tesla, what would it take for Elon to close the $900 billion gap to $1 trillion? By our math, Tesla would have to hit:

Tesla is currently trading at:

If that seems totally insane, keep in mind that a year ago (after taking into account the stock split), Tesla was trading at:

Two years ago Tesla was at:

At $3,333 per share, Tesla would have a market cap of $2.35 trillion. Apple's current market cap is $2.14 trillion. So a massive massive jump, but not out of the known universe of market caps.

A major caveat here is that all the net worth numbers we just mentioned are pre-tax. If Tesla and SpaceX continue to grow, Elon's pre-tax paper net worth will grow but whenever he sells any shares, he'll have a capital gain and will owe the IRS a cut. If he decided to sell every single share of Tesla and SpaceX the day he hit $1 trillion… and if there was a market that could handle such a massive influx of shares for sale… Elon would really end up with a net worth closer to $500 billion.

That said, if in some insane world SpaceX does grow to a $250 billion valuation AND Tesla grows to a $2.35 trillion valuation, at that point Elon Musk will officially be the world's first trillionaire.