Watch Out Zuckerberg, The Winklevoss Twins Are Now Worth A Combined $6 Billion

It's been over a decade since identical twin brothers, Cameron and Tyler Winklevoss, were in a battle with their former Harvard classmate Mark Zuckerberg over the creation of Facebook. You are probably mildly aware of their story if you've seen David Fincher's 2010 movie, "The Social Network".

As you may recall, the Winklevosses accused Mark Zuckerberg of stealing their idea to create a social network. The evidence was actually somewhat compelling and the twins were eventually awarded a $65-million settlement. The settlement was made up of $20 million in cash and $45 million in pre-IPO Facebook stock.

A lot of people thought that would be the last we'd hear of the Winklevii – a footnote in the birth of one of the world's most valuable companies.

That turned out NOT to be the case.

Tyler and Cameron would eventually turn into two of the world's most vocal evangelical preachers of the value of cryptocurrencies.

When the Winkelvoss twins started investing in Bitcoin in 2012, it sold for $8. As of this writing, a single Bitcoin would cost you $57,000.

Through their personal accounts and various business ventures, the twins have claimed that they manage or own 1% of all Bitcoin in circulation, an estimated 180,000 coins. At $57,000 per coin, those 180,000 BTC are worth…

Tyler and Cameron didn't just hoard Bitcoin, they also are the founders of several of the most important companies in the crypto space, notably, Gemini and Block-Fi.

Today, between their personal crypto holdings and their various investments, Tyler and Cameron Winklevoss are worth a combined…

This is truly a story of rejection, dejection and redemption. 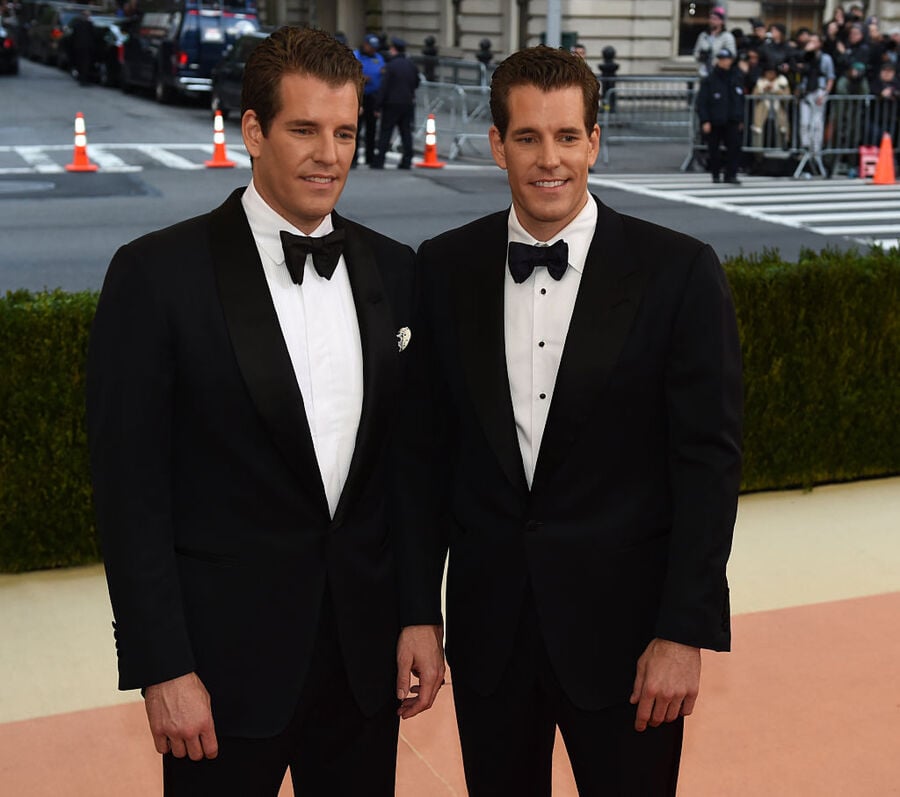 Rejected by the Valley

After settling with Mark and Facebook, the twins went to Oxford, earned MBAs and even competed in the Olympics.

Armed with their Facebook settlement money, the two hoped to become venture capitalists. Unfortunately, they quickly learned no one wanted their money. They were literal pariahs in Silicon Valley for going to war with the almighty Zuck.

Dejected and rejected, they regrouped with a trip to Ibiza in 2012. It was during this fateful trip that they first learned about Bitcoin.

Upon their return to New York City, they made their first Bitcoin purchase.

A Crypto Empire is Born

In 2014, the twins founded the cryptocurrency exchange, Gemini. Today, the company offers trading and support for more than 30 different cryptocurrencies and is one of the largest crypto exchanges in the world.

Through their holding company, Gemini Space Station, Tyler and Cameron have invested in more than 25 digital asset startups. They envision a world where assets are largely digital and art, music, real estate, and businesses are launched and bought and sold through the blockchain.

Another hot investment is digital art auction platform, Nifty Gateway. You may have recently heard about an artist named "Beeple" who sold an NFT for $69 million. Beeple originally became famous on Nifty Gateway. Beeple's real name is Mike Winkelmann. Winkelmann + Winklevoss… It was meant to be.

Tyler and Cameron's most recent acquisition, Artie, is a company that builds video games that don't need to be downloaded to a device. Artie's games exist on the blockchain. Alongside Cameron and Tyler Winklevoss, investors include YouTube co-founder, Chad Hurley and Zynga founder, Mark Pincus. The goal of Artie and other blockchain-based companies is a return to a free and open web.

When you add it all up, today Tyler and Cameron are each personally worth $3 billion.

They are still quite far from Mark Zuckerber's $123 billion net worth – aka the fifth largest personal fortune in the world – but this story of rejection and redemption is truly inspirational.

In 50 years, who will be richer? Mark Zuckerberg or Tyler + Cameron Winklevoss?