What Drove One Of America's Richest Oil Executives To Commit Suicide By Driving Into A Concrete Bridge At 88MPH?

By Amy Lamare on June 1, 2021 in Articles › Billionaire News

On March 2, 2016, energy tycoon Aubrey McClendon drove his Chevy Tahoe straight into a concrete bridge at 88mph. He was not wearing a seat belt and the SUV exploded into flames. McClendon was killed instantly.

The news was shocking. Not just locally around Oklahoma City, but nationally. The 56-year-old was a one-time high-flying corporate executive. In 2008, McClendon was the highest paid CEO of all the S&P 500 companies, with a compensation package totaling $112 million. At the peak of his career Aubrey was worth right around $1 billion. He was one of the largest landowners in the United States, owning 100,000 acres. He even owned 20% of the NBA's Oklahoma City Thunder.

Aubrey McClendon had it all. So what led to this tragic ending? 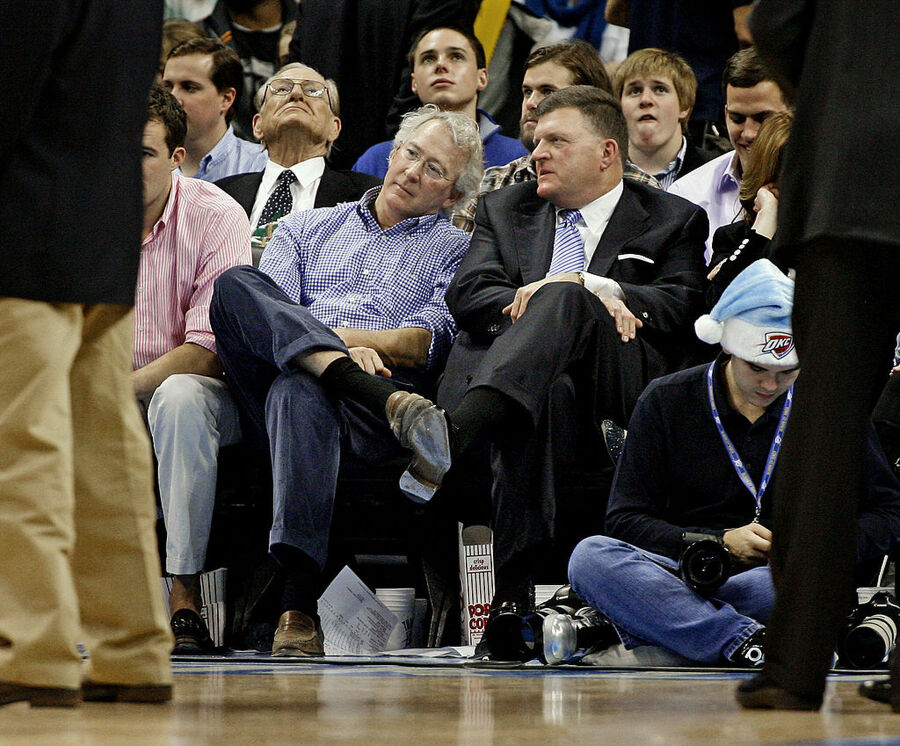 Aubrey McClendon on the left (Photo by Brett Deering/Getty Images)

A day before Aubrey's death, March 1, McClendon was indicted by a federal grand jury. He was accused of violating antitrust laws from 2007 to 2012, while he was the CEO of Chesapeake Energy.

People who knew McClendon said he was a happy, optimistic, and outgoing person. In the end, though, his life went down in flames.

McClendon co-founded Chesapeake Energy and built it into the second-largest gas producer. Only Exxon-Mobile was bigger. He had a larger-than-life personality. He was smart and ambitious and not a rule follower. He was a pioneer in the controversial fracking industry.

McClendon grew up in Oklahoma. He was president of his senior class in high school and co-valedictorian. He attended Duke, where he met his future wife Kathleen Upton Byrns. He graduated with a B.A. in history and a minor in accounting. After college, he first worked as an accountant. Then, one day, he read an article in the Wall Street Journal about two men selling their state in an energy company for $100 million. He got a job at his uncle Aubrey Kerr's company Jaytex Oil and Gas. He left that job in 1982 to found his own company.

In 1989, McClendon and his friend Tom Ward founded Chesapeake Energy with $50,000. He was 29. They leased land that larger oil and gas companies had abandoned. They chose the name for their company because if the company failed, they could distance themselves from it more than if it was named McClendon Ward.

McClendon was one of the first people to use the now controversial fracking method of freeing natural gas reservoirs from dense layers of rock. Chesapeake drilled sideways into the formations, blew them apart with explosives, and then pumped in water and sand to keep the cracks open so that the gas could be mined. Fracking is currently blamed for poisoning drinking water, polluting the air, and triggering earthquakes. However, it is also credited with reducing the U.S.'s dependence on foreign oil.

Chesapeake Energy went public in 1993. At the time the company's market cap was $25 million.

Chesapeake thrived for the next few years. In 1997 they hit a roadblock when one of Chesapeake's key oil fields didn't produce as much as expected. McClendon attempted to sell the company in 1998 but there were no buyers. That worked out well because, in the early 2000s, natural gas prices increased.

By 2008, a decade after Chesapeake's low point, McClendon was the highest-paid CEO of all the S&P 500 companies with a $112 million compensation package. That same year, he was told his shares weren't valuable enough to secure a margin loan. He was forced to sell most of his 31.5 million shares, which was a 94% stake in Chesapeake. In 2009, the company gave McClendon a five-year retention contract and a $75 million bonus.

In a 2011 cover story, Forbes called McClendon "America's most reckless billionaire," and noted his high-risk tolerance and the recklessness of the sale of his shares in 2008.

Chesapeake had reduced the U.S.'s dependence on foreign oil, which in turn, drove down the price of oil. McClendon had also taken on a lot of debt to grow the company. He had more than $1 billion in personal loans to finance drilling costs. He ran into trouble because he took the loans out from lenders that did business with Chesapeake, which was a conflict of interest. He was fired in 2012. McClendon retained the option to continue investing in Chesapeake's wells after he was fired.

In April 2013, McClendon founded American Energy Partners, LP (AELP), an oil and natural gas company. Over the next two years, he hired more than 600 people and took on equity and debt in the amount of $15 billion.

In February 2015, Chesapeake filed a lawsuit against McClendon, accusing him of misappropriating company data on available land after he was fired.

On March 1, 2016, McClendon was indicted by a federal grand jury for violating anti-trust laws. McClendon was accused of suppressing the price of oil and natural gas site leases by rigging the bidding process.

Aubrey McClendon denied all charges and said that he worked to create jobs and help Oklahoma's economy for 35 years while providing energy for the entire country. He released a statement which read:

"The charge that has been filed against me today is wrong and unprecedented, I have been singled out as the only person in the oil and gas industry in over 110 years since the Sherman Act became law to have been accused of this crime in relation to joint bidding on leasehold."

The Assistant Attorney General of the time said, in part:

"Executives who abuse their positions as leaders of major corporations to organize criminal activity must be held accountable for their actions."

The next day, Aubrey McClendon got into his Chevy Tahoe and drove it into a concrete embankment at 88 miles per hour.

According to a police report:

"He pretty much drove straight into the wall. The information out there at the scene is that he went left of center, went through a grassy area right before colliding into the embankment. There was plenty of opportunity for him to correct and get back on the roadway and that didn't occur."