By Amy Lamare on April 3, 2020 in Articles › Billionaire News

In a world full of bad news, I consider the following story a bit of good news. Or at the very least, an example that karma is real. Today it was announced that WeWork founder Adam Neumann is losing a key part of his former company's bailout from SoftBank. Specifically, SoftBank announced it is no longer injecting $3 billion into the struggling shared office space company. Of that $3 billion, a little less than $1 billion was set to go straight to Neuman personally. With today's news, Adam has officially lost his billionaire status. His net worth now stands at $400 million. And while that may sound like a lot, it might not feel so great for a guy who is likely about to face a number of employee and investor lawsuits… and whose personal net worth at one time peaked at $14 billion. So what changed?

SoftBank announced it was pulling out due to multiple new and significant civil and criminal investigations into the shared-space office leasing company. SoftBank said it would be "irresponsible" to continue with the deal under these new and updated circumstances.

SoftBank's offer, which was made back in October 2019, was to buy $3 billion worth of shares from investors and employees to essentially take full control and ownership of the struggling firm. The deal was to include a buyback of $970 million worth of shares from founder and former CEO of WeWork Adam Neumann. With today's news, Neumann will be left with a larger portion of WeWork shares that are likely worth a fraction of their previous value.

Back in December, we reported on the compensation package Neumann was handed to walk away from the company. A month after Neumann stepped down as CEO of WeWork, he struck a deal with the company and SoftBank, its biggest investor, to give up the majority of his stake in the company. In the deal Neumann made in October, the price of his shares was slashed from $38.36 a share to either $19.19 or $21.05 a share. SoftBank valued WeWork at $19.19 per share, or $8 billion, during its emergency restructuring of the company. If WeWork shares hit the market at $25 a share, Neumann could sell his for $111 million. At $35 a share, he'd have $352 million worth. At $45 a share, Neumann could cash in for $593 million. Neumann owns tens of millions of shares in WeWork's holding company. He was also given the right to sell up to $970 million of his shares to SoftBank in the next few months. Now all of that has fallen apart. 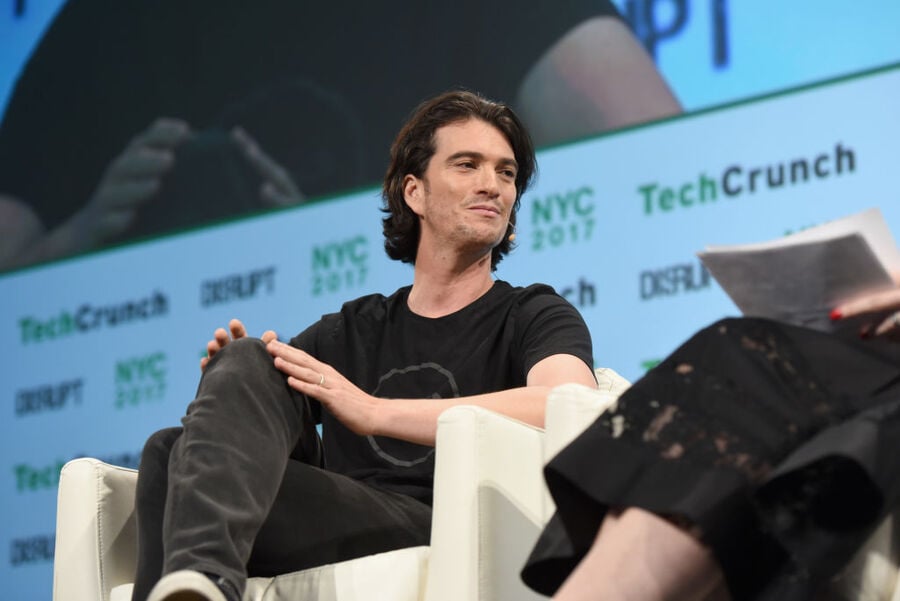 SoftBank is, as of this writing, still committed to WeWork, which it bailed out in October 2019. The part of the deal that has been canceled was part of a proposed wider rescue package. This part of the bailout was canceled because WeWork didn't meet the conditions of it. The company had certain April 1 deadlines, such as getting the right antitrust approvals in place and closing its China and Asia ventures, that it failed to meet.

In walking away from this part of the deal, SoftBank also referred to a number of new criminal and civil investigations into WeWork's financing activities, its communication with investors, and how it dealt with Neumann.

When WeWork filed for its now-canceled IPO, a few things stuck out. One, he planned to have his wife, certified yoga teacher Rebekah Paltrow Neuman succeed him. The board of directors struck that down pretty quickly. Now, it's been revealed that during a speech Neumann gave to employees in January 2019, he said that WeWork isn't "just controlled – we're generationally controlled." He went on to say that his five children "don't have to run the company," but they "do have to stay the moral compass of the company." This speech was caught on video and during it, Neumann also said: "It's important that one day, maybe in 100 years, maybe in 300 years, a great-great-granddaughter of mine will walk into that room and say, 'Hey, you don't know me; I actually control the place. The way you're acting is not how we built it,'" he said.

The Wall Street Journal wrote about Neumann's management style, describing alcohol-fueled parties for their staff and Adam's decision to ban meat from the WeWork offices despite the fact that he is not a vegan or vegetarian. One time in 2016, Neumann laid off 7% of the staff in a somber all hands on deck meeting about cutting costs. Moments later waiters carried trays of tequila shots into the room and Darryl McDaniels of Run DMC played a set for the assembled staff. His wife, Rebekah, isn't any better. She had a number of employees fired on the spot because she didn't like their "energy." She's also super anti-feminist. In 2018 at a WeWork Summer Camp she told the audience: "A big part of being a woman is to help men [like Adam] manifest their calling in life."

Further complicating things for Neumann's bottom line is the economic realities of the COVID-19 crisis. The economy is at a standstill and people are working from home. WeWork's many locations are nearly empty as tenants opt to stay home.

Neumann was forced out of WeWork after its disastrous IPO plans last fall and intense attention on his questionable leadership style and use of company funds.