By Joseph Gibson on June 19, 2015 in Articles › Billionaire News

Even in our supposedly politically correct society, sexual harassment is a serious problem in the workplace. Many people would say that harassment in the workplace is impossible to stop. On the other hand. former model Hanna Bouveng might have found a new kind of deterrent towards sexual harassers – an absolutely enormous and slightly embarrassing lawsuit. Not only is Hanna suing her former boss Benjamin Wey for $850 million in damages, but she's also publicly stating that the first time she had drunken, coerced sex with Wey he only lasted two minutes in bed with her! It's always a good policy that when you can't be sure of hurting a person financially, you take aim at their cocksmanship as a kind of nuclear option.

According to Bouveng, a former Swedish model,  she was hired by Wey back in the summer of 2013 as a marketing chief for Wey's company New York Global Group. She says the fact that she was hired in her early 20s in such an important position is an indication of where Wey's motives truly lied – in launching a "relentless campaign to have sex with her," according to the opening statement made by her attorney recently in court. While working at his firm, Hanna alleges that Wey pressured her to dress provocatively. 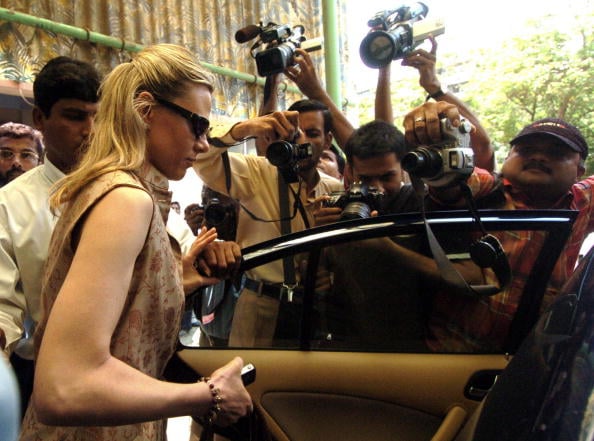 Meanwhile, Wey also began footing the bill for her $3,600 a month apartment in Tribeca, where incidentally she says he forced her to have sex with him for the first time, after getting her drunk and giving her a $2,000 Prada bag as a "gift." That's when things started to turn real nasty – here's her attorney again: "He has sex with her and it's over in two minutes. She was horrified and debased."

Following this incident, Bouveng says she started to avoid Wey in part by spending time with another man. She was fired in April of 2014 for what Wey said was her proclivity for nightclubs but Bouveng says was simply retaliation for failing to bend to his whims. After that, Wey began repeatedly writing articles about Bouveng on his online magazine called The Blot, in which he allegedly portrayed Bouveng as a "prostitute" who "hangs out with cocaine dealers."

Hanna also accuses Wey of leaving her threatening voice mail and Facebook messages, as well as contacting members of her family with accusations of her "cheating" on him: "He contacted my father, brother, aunt, all my closest friends, business acquaintances, former employers, possible employers," Bouveng reportedly said in an interview late last year.

On Thursday, Wey admitted in a NYC courtroom that he fired Hanna after he walked into her apartment (that he was paying for) and found her sleeping next to "a naked black man". He probably shouldn't have been surprised because Wey also admitted that he had hired a private investigator who informed him of the boyfriend and had even reportedly performed a background check on him.

Clearly, it's a very bad situation, and it could quite possibly get worse depending on the outcome of the trial, which is expected to go on until next week or so. Then, we (along with Benjamin Wey) will know just how much Wey will owe Bouveng for his at-best creepy and at-worst criminal behavior. And even if the case breaks his way and he doesn't owe Bouveng a dime, he'll always have the memory of the time he was called the "two-minute man" in The New York Post – a memory like that requires a lot of liquid assets to make go away, and even then it probably never goes away completely.