Two Weeks Ago Ryan Cohen's 9 Million GameStop Shares Were Worth $4+ Billion. He Probably Should Have Sold…

By Brian Warner on February 11, 2021 in Articles › Billionaire News

For those who missed our coverage of GameStop, please refer to this article for a detailed refresher. For everyone else, a brief recap: Two weeks ago GameStop's stock suddenly spiked as retail investors ganged up to punish a bunch of short selling hedge funds. One of the biggest beneficiaries of GameStop's soaring stock price was an investor named Ryan Cohen. Ryan earned a fortune as the founder of online pet supply company Chewy.com. Chewy was acquired by PetSmart for $3.35 billion in 2017. PetSmart took Chewy public in 2019. Today Chewy has a market cap of $43 billion.

After the transaction, Ryan was left with several hundred million dollars.

In June 2020 Ryan made headlines when he announced he had taken his entire fortune and invested in just two stocks: Apple and Wells Fargo. Today his Apple stake alone reportedly is worth more than $500 million..

Ryan may have been fibbing or exaggerating slightly about only investing in two stocks. We now know he bought stock in at least one other company. That company?

Ryan Cohen bought 9 million shares of GameStop at some point in the middle of 2020. We know this because he acquired so many shares he was legally require to reveal his roughly 10% stake in the company. He paid an average price per share of $8. With fees and fluctuations, his total outlay was $76 million.

Between August 2020, when he made the SEC filing, to December, GameStop's share price didn't budge much higher than $10 a share. In mid-January things started to get a little… funky.

For a brief shining moment on Wednesday January 27, GameStop shares hit $483 per share. At that level, Ryan's 9 million shares were worth:

The stock ended that Wednesday at $347, so Ryan went to bed that night on a paper fortune of $3.123 billion. In retrospect, he probably should have dumped the entire stake the moment he woke up Thursday… or at least offloaded some chunk of shares! 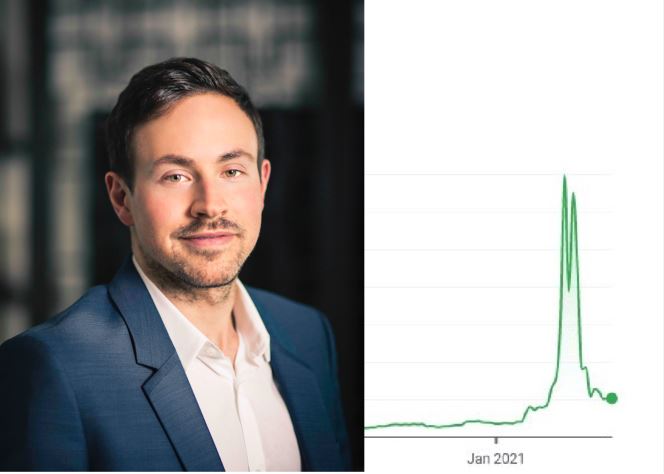 GameStop hovered in the $90s for a few days, then dropped to $50, where it has been every since. At today's closing price of $51 per share, Ryan Cohen's 9 million GameStop shares are worth:

Obviously that is still an absolutely enormous amount of money and an incredible return on an initial $76 million investment, but still it has to be a bit painful. That's a 90% drop in value btw.

There have not yet been any signs in SEC filings that Ryan sold a meaningful amount shares during the firm's crazy ride. And, to be fair, had he dumped his entire stake – 10% of the total available shares – even over a period of days during that bubble, it would have absolutely flooded the market and sent the shares tumbling.

Still, not many people in history can say "Hey remember two weeks ago when I was worth around $4 billion?"

I wonder what his stake will be worth in two weeks!