The Koch Brothers Are Worth A Combined $100 Billion. How Did They Make Their Money? How Do They Spend Their Money

Charles and David Koch are two of the richest people in the world. Charles Koch and David (who just passed away this morning, hence this article from 2018 being re-posted) both have a net worth of $58 billion. They are two of the most controversial billionaires around according to the book Dark Money by Jane Mayer. The book details the rise of the right and the billionaire families that funded that rise. The Kochs, in particular, have spent hundreds of millions of dollars to bring their political ideas to the center of American politics. The Kansas natives have used their wealth and influence to create a network of political influence in support of their libertarian values.

Lately, they've been clashing with the President over his proposed tariffs. And I am not sure if Donald Trump realizes it, but if he would like to remain President and/or be reelected in 2020, Charles and David Koch are not the people he should be on the bad side of.

How did these brothers come to be so rich and influential? It all dates back to their father Fred Koch. The Texas native and MIT grad joined the Keith-Winkler Engineering Company of Wichita, Kansas in 1925. Later that same year, the company was renamed the Winkler-Koch Engineering Company. The company had a big breakthrough with a gasoline refinement technique. Lawsuits from established companies that didn't appreciate a new kid on the block prevented them from getting much work. So, Fred Koch looked to Europe for work. 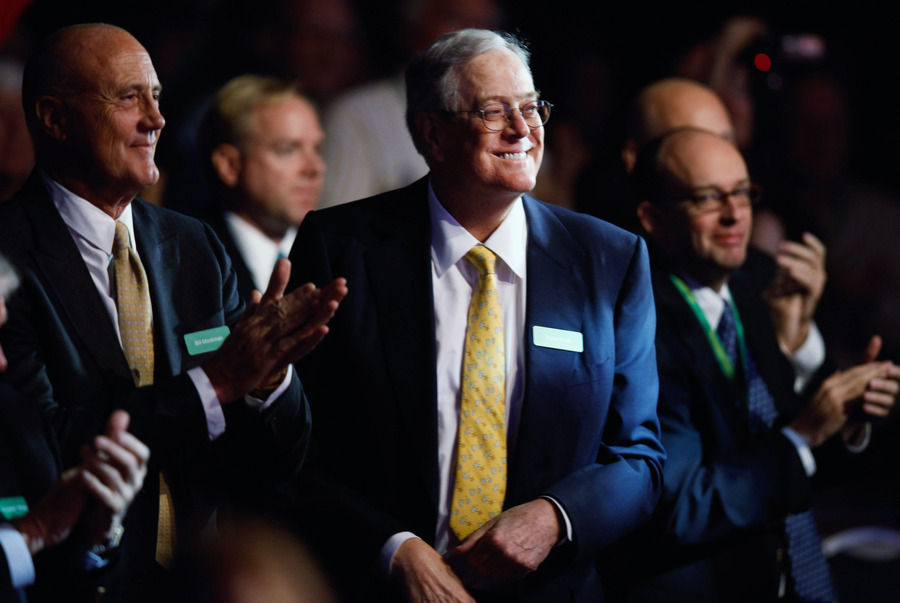 In the years preceding World War II, a young and industrious Fred Koch headed to Europe to seek his fortune. He received a $500,000 paycheck from Stalin for his assistance in building 15 oil refineries in the Soviet Union in the 1940s. While in Europe, Koch entered into a partnership with William Rhodes Davis, best known as an American Nazi sympathizer. Mayer hired Koch to build the Third Reich's third-largest oil refinery. This refinery was a critical part of Hitler's war machine. Just a few years later, Koch helped the Nazis build that huge oil refinery. That refinery went on to produce hundreds of thousands of gallons for the Luftwaffe.

In 1940, Koch Sr. founded the Wood River Oil and Refining Company. Six years later, he changed the name to Rock Island Oil and Refining Company. He married Wichita native Mary Robinson and had four sons: Fred Jr., Charles, and twins David and Bill. Fred Jr. had no interest in the family business, which was worth $80 million in 1960. Fred Jr. became a patron of the arts. Charles, on the other hand, was very interested in the family business. In 1961, at 26 years old, he joined the company. Five years later, he became president of the company. Fred Sr. died in 1967 and Charles became chairman of his father's company. At that time it was worth $250 million. Charles renamed the company Koch Industries in 1968 in honor of his father. David joined the family business in 1970. Bill joined in 1971.

The three brothers did not get along, and in 1980 Bill tried to launch a coup to take over the board of Koch Industries. Charles and David killed that plan and fired Bill. He left with a $400,000 severance payment. That wasn't the end of the battle. Bill and Fred Jr. had shares in the company. Negotiations began between the four brothers with Charles and David on one side and Bill and Fred Jr. on the other. In 1983, the Koch brothers reached a settlement. Bill was paid $620 million for his 21% stake in the company. Fred was paid $400 million for his stake in the company. In 1985, Bill and Fred Jr. took their brothers to court, alleging that their shares had been undervalued in the settlement. The case reached a $25 million settlement.

All of those fines and judgments would kill most companies, but not Koch Industries. The company branched out into mining, real estate, and ranching.

Politically, the Koch brothers are a force to be reckoned with. They are reportedly spending $400 million in the upcoming midterm elections. In 2017, Koch Industries gave $1.3 million to congressional candidates.

Today, Koch Industries brings in an annual revenue of $100 billion. Charles and David each own a 42% stake in the family business. Going forward, only one Koch brother will be at Koch Industries. David announced his retirement this year. Charles will remain with the company.