Top 10 Richest People In The World

By Amy Lamare on February 28, 2020 in Articles › Billionaire News

Never before has wealth been so concentrated to just a handful of people. The top 10 richest people in the world have a combined net worth of $847 billion. The three wealthiest people are all worth over $100 billion. That's almost inconceivable! Jeff Bezos, Bill Gates, and Bernard Arnault have a combined net worth of $347 billion. Seven of these 10 men, and yes, they are all men, made their fortunes in the tech industry. From Microsoft to Google to Facebook to Amazon, they changed the way we interact with, search for things, connect with and shop for…well, virtually anything. Two of the other 10 men made their incredible net worths in the fashion industry. Fast fashion netted Zara's founder the 10th spot on the list while luxury goods earner LVMH's Bernard Arnault the third spot on the list. And then there's the Oracle of Omaha, Warren Buffett: He is in a class all his own.

There are interesting observations to be made in looking at the 10-richest people in the world right now. There are eight Americans on the list. All 10 of the richest people in the world are self-made billionaires. It takes a lot of drive, focus, ambition, patience, and chutzpah to go from nothing to a billionaire. The poorest person on this list has a net worth of $64 billion. 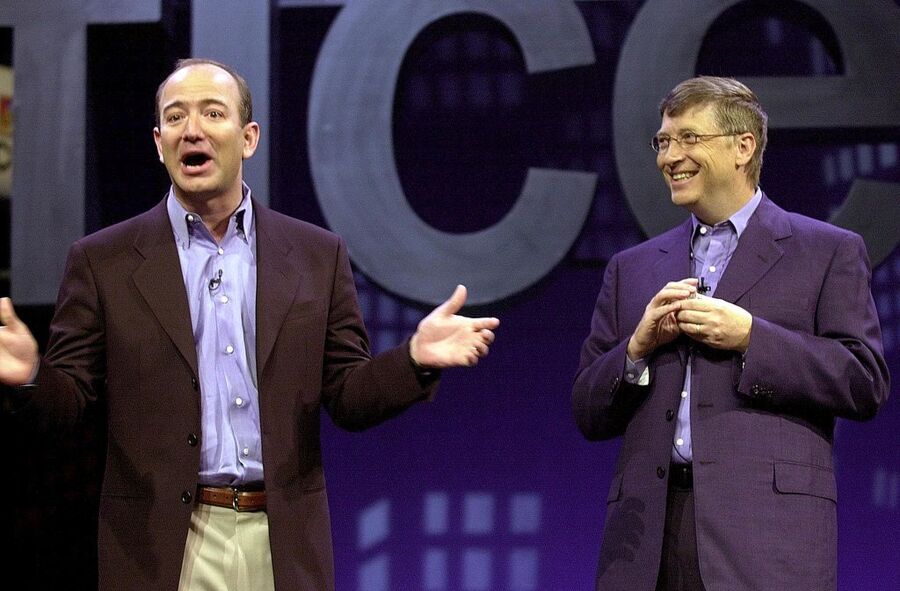 Amancio Ortega owns a 59.3 percent stake in the world's largest clothing retailer, Inditex which is the parent company of Zara. Amancio is the richest person in Spain and the second richest person in all of Europe. Ortega has never given a public interview, and in contrast to his work in the world of high fashion is most often seen in a pair of blue jeans and a T-shirt. He is said to have a major hands-on role in his company the Inditex group.

Steve Ballmer earned his net worth after being one of the earliest employees of software giant, Microsoft. Ballmer joined Microsoft in 1980 as the 30th employee. Bill Gates hired him to be a Business Manager and offered him a compensation package that included an annual salary of $50,000 plus an 8% ownership stake in the company. The company incorporated one year later, in 1981, and Ballmer's stock skyrocketed in value. In August 2013, Ballmer announced that he would be retiring as CEO within 12 months. In 2014, he spent $2 billion to buy the NBA's Los Angeles Clippers.

Sergey Brin was a PhD student at Stanford when he met Larry Page and teamed up on a project originally called "Backrub." Together, they created a paper titled "The Anatomy of a Large-Scale Hypertextual Web Search Engine." Their paper became the most downloaded scientific document in the history of the internet at that time. Brin and Page used Backrub web crawler to develop an algorithm which gave every website on the internet a quality score. They called this algorithm "Page Rank" which was both a reference to the page of an internet and Larry's last name. After developing a crawler and an algorithm, the next logical creation was a search engine to display results…and that is how Google was born.

Larry Page co-founded Google with Sergey Brin in 1998 in a garage in Mountain View, California. He is now the CEO of Alphabet, which is the company that owns Google. Larry's dad was in computer science, so he had access to computers at a young age. After graduating with his B.S. from the University of Michigan, Larry enrolled in the graduate computer science program at Stanford University. His dissertation topic was exploring the mathematical properties and link structure of the World Wide Web. His major revelation was that one could judge a website's quality based on the number of backlinks it received from other websites.

Larry Ellison is the co-founder of Oracle Corp., the second largest software maker behind Microsoft. He is a true rags-to-riches story. His mom was a teenaged single mom when he was born. He was adopted by his aunt and uncle when he was nine months old, he didn't know he was adopted until he was 12 and he didn't meet his biological mom until he was 48.

Mark Zuckerberg launched the social network then known as TheFacebook.com when he was a sophomore at Harvard before dropping out to move to Palo Alto, California and work on the site full-time. Along the way he's hit a number of milestones including being the youngest (at the time) self-made billionaire. Now 35, Zuckerberg has had to face some heat for Facebook's role in the Cambridge Analytica hack.

Warren Buffett went to Columbia, where he studied under Benjamin Graham, who would become his mentor. After college he moved back to Nebraska, bought Berkshire Hathaway, and transformed it into a powerhouse holding company. Warren Buffett is arguably the most famous and successful investor in history. If you had invested $10,000 with Warren Buffett in 1966, today you would have over $160 million! That same $10,000 invested in the S&P would be $140,000. Warren Buffett has pledged to give away 99% of his net worth to charity before he dies. 83% of the money will go to The Bill and Melinda Gates Foundation. That equates to roughly $41 billion which makes it the largest charitable gift in human history.

Bill Gates co-founded Microsoft with his friend Paul Allen and served as CEO until 2000. Gates has spent much of the last 20 years as the richest person in the world, though he was recently de-thronged as the world's richest man after a long run. Gates and his wife combined three family foundations to create the charitable Bill & Melinda Gates Foundation in 2000, the largest transparently operated charitable foundation in the world. Gates announced on June 15, 2006 that he would transition out of his day-to-day role at Microsoft over the next two years in order to dedicate more time to philanthropy.

Jeff Bezos founded Amazon.com in the garage of his home in 1994 after writing the business plan while his wife drove them cross country to Seattle. The online marketplace went public three years later. It now sells everything under the sun. His net worth was affected by his divorce from MacKenzie Bezos, his wife of 25 years, but not enough to knock him out of the richest person in the world spot.