Chances are, you've spotted or maybe even stopped at a Love's Travel Stop while on a road trip in the U.S. These respites from long days on the road have been welcoming weary travelers and professional truck drivers since the 1960s. Before that, there weren't one stop places to fuel up, use the bathroom, get some food, and relax for a few – at least not until Tom and Judy Love created Love's Travel Stops & Country Stores. Today, the couple has a net worth of $3.4 billion.

In 1964, Tom and Judy Love took their life savings of $5,000 ($41,000 today adjusted for inflation) and bought an abandoned gas station in Watonga, Oklahoma. Tom Love is the son of an oil man and he had an inkling that with the increasing availability of affordable cars, it would be important to have gas stations on lonely highways all over the country. However, his timing was just a bit off. You see, in the 1970s there was a disastrous oil shortage in the United States.  This crisis caused the price of gas to skyrocket. People had to wait in extremely long lines at pumps all over the country just to fill up. It almost bankrupted the Loves.

In order for the company to survive, something needed to change. Tom and Judy came up with a plan. The Loves decided to use their original Watonga location to test a revolutionary new concept. They would launch the first ever combination gas station and supermarket. Now while they waited for their turn to fill up, patrons could shop for all of their groceries or grab a bite to eat in an clean, comfortable, and air conditioned market. 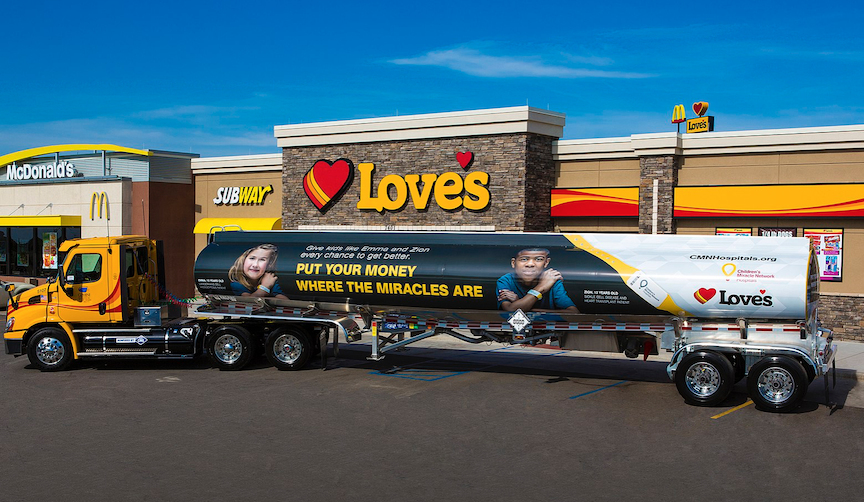 The Loves were one of the first travel stops in the U.S. to offer one-stop shopping for travelers. Not surprisingly, these "Mini Stop" were a huge success with customers. The Loves soon expanded the concept to all of their gas stations across western Oklahoma. In 1972, the Loves began the process of converting the rest of their locations from simple gas stations to convenience stores with self-serve gas. The following year, the Loves decided to rebrand their company Love's Country Stores.

Today, Love's is one of the 10 largest private companies in America. The company operates more than 470 stores in 41 states. Love's has remained a family owned business with Tom Love leading the way and his adult children running the company.