In 2014 Tim Draper Paid $19 Million For 30,000 Bitcoins Confiscated From Silk Road – How Much Is That Batch Worth Today?

By Amy Lamare on February 11, 2021 in Articles › Billionaire News

One year ago, a single bitcoin would cost you around $10,000. As of this writing, the cost for one bitcoin is around $45,000. If you went back to 2014, you could have bought a single bitcoin for around $400. Why do we mention 2014 specifically? Because that's when investor Tim Draper bought a big batch of Bitcoins at auction. The auction was being held by the U.S. Marshals Service. The bitcoins had been confiscated from Silk Road founder Ross Ulbricht. How has that investment turned out for Mr. Draper? I would say, pretty…pretty…pretty well!

Tim Draper is the founder of Draper Fisher Jurvetson, a venture capital firm based in California. He is actually a third generation venture capitalist. His father, William Henry Draper III, better known as Bill Draper, founded the Draper & Johnson Investment Company in 1962 and was chairman and president of the Export-Import Bank of the United States. Bill was an early investor in Skype, which eventually sold to eBay for $4.1 billion.

Some of Tim's venture successes include investments in Hotmail, Baidu and Tesla. He was also a very early adopter of cryptocurrency. At one point he bought around 41,000 bitcoins when they cost just $6. That set him back $250,000. If he still held those coins today, they'd be worth a little more than $1.8 BILLION.

Tragically, Tim lost that entire investment in 2014 when the bitcoin exchange Mt. Gox collapsed, taking with it an enormous electronic fortune held by thousands of investors.

Somehow Tim wasn't deterred. In fact, he jumped right back into the bitcoin game.

Remember a guy named Ross Ulbricht? He's the guy who was arrested by the FBI in October 2013 and eventually convicted of being the mastermind of the dark web drug and other illicit services market, Silk Road. At the time he was 29 years old. Today he is serving a life without parole at a federal prison in Arizona.

As the creator of Silk Road, Ross took a small cut of every transaction that occurred on his site. Be it a drug sale, a weapons purchase or a murder-for-hire, Ross took a little slice as the middleman.

During its time operating, the Silk Road reportedly processed $9 billion worth of transactions. Along the way, Ross built up an impressive little collection of bitcoin, 144,000 bitcoins to be exact. At the time of his arrest (October 2013), a single Bitcoin was trading for around $180. So Ross's Bitcoin stash was worth roughly $25 million.

In mid-2014, the U.S. Marshals Service held for an auction for 30,000 bitcoins that formerly belonged to Ulbricht.

Tim Draper was one of 45 people bidding on the confiscated bitcoin during the 12-hour auction. The bitcoins were auctioned off in nine blocks of 3,000 bitcoins and one block of 2,657 bitcoins.

Draper was the ultimate winner of all ten blocks of the auction. In total he paid $19 million 29,657 bitcoins.

That turned out to be… a wise decision. 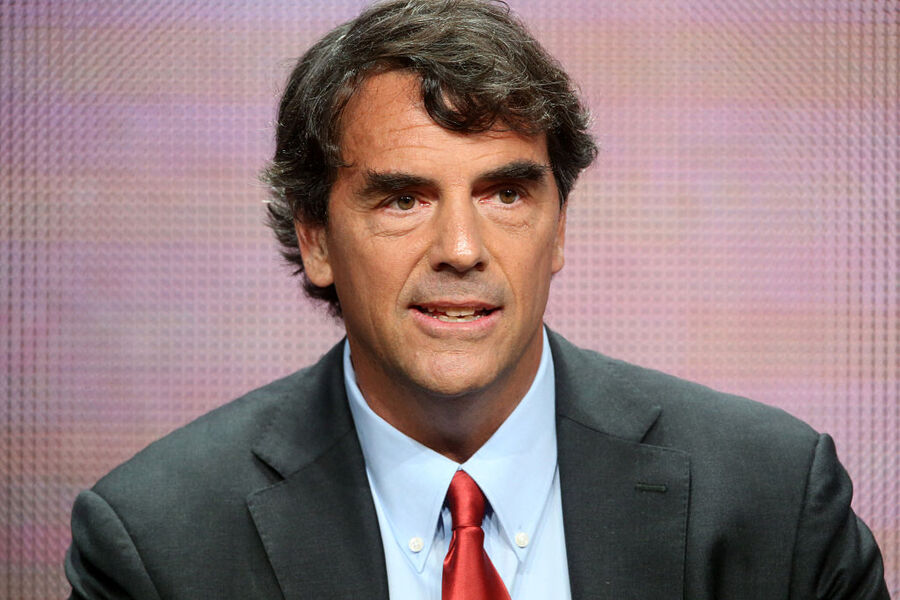 Draper has high hopes for bitcoin. In September 2014, when bitcoin was around $400, he correctly predicted that the price would eventually top $10,000. He was proven correct for the first time in November 2017.

He actually has even higher hopes for bitcoin, predicting:

So what happened to those 29,657 coins? He still owns them, obviously. And as we mentioned earlier, as of this writing, a single bitcoin costs $45,000. Therefore his batch of confiscated Silk Road coins are worth:

Not bad for a $19 million investment 🙂

He better hope Ross Ulbricht never escapes from prison though…