These Are The Richest People In Each State Right Now

The United States has more billionaires than any other country in the world. Of course, it also has a larger landmass and population than most other countries, so that helps. What also helps is the concentration of the technology and finance industries in the good ol' U.S. of A. As of the end of 2019, there are 621 American billionaires. The combined net worth of the richest 400 Americans was $2.9 trillion – which is, quite frankly, a staggering amount of wealth. We're breaking things down a bit farther, to a list of the 50 richest people in each state. It should be noted, however, that five states have no billionaires at all. 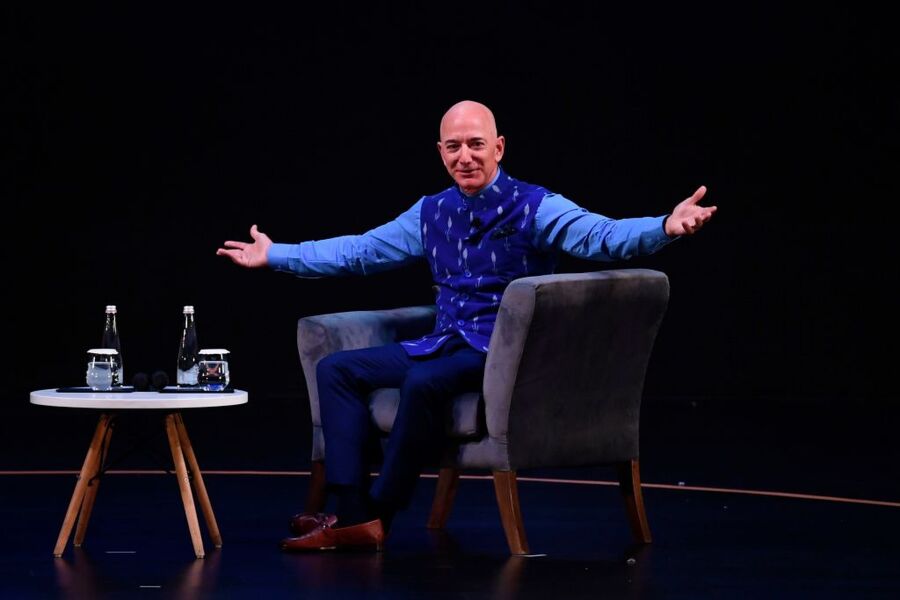 Jimmy Rane is the founder and CEO of Great Southern Wood Preserving. He is at the center of the advertising for his company as his alter ego, Yella Fella.

Jonathan Rubini and Leonard Hyde made their fortune in Alaskan real estate.

Arizona's Diane Halle is the widow of Discount Tire founder Bruce Halle. Bruce passed away in 2018.

Jim Walton is the youngest son of Walmart founder Sam Walton. He's also just one of the many heirs to the retail giant's fortune. He has a slightly larger stake in the company than the other heirs, as well as other investments.

Facebook founder Mark Zuckerberg is the richest of all the rich people in California. He edged out Oracle's Larry Ellison and Google's Sergey Brin and Larry Page to take the title of the richest in the state.

Philip Anschutz edged out DISH founder Charles Ergen to take the title of the richest in Colorado. Anschutz made his money in several businesses, including oil, railroads, real estate, and entertainment. His Anschutz Entertainment produces the annual Coachella Valley Music Festival and owns the NHL's Los Angeles Kings.

Ray Dalio started Bridgewater Associates in 1975 in Westport, Connecticut. In 2012 the company became the largest hedge fund in the world and is now worth over $150 billion in assets under management.

Delaware doesn't have any billionaires, so brother and sister Elizabeth Snyder and Robert Gore tie as the state's wealthiest people. Robert invented Gore-tex.

Born in Budapest, Hungary, Thomas Peterffy moved to the US in the mid-60s. Peterffy launched his own company, Interactive Brokers, an electronic brokerage firm in the early 90s.

Jim Kennedy is the chairman of Cox Enterprises, a media conglomerate founded by his grandfather, James M. Cox.

Pierre Omidyar founded eBay and immediately committed to giving all of his billions away in his lifetime.

Frank VanderSloot is the founder and long-time head of the multi-level marketing supplements company Melaleuca.

Ken Griffin founded global investment fund Citadel in 1990. Over the past few years, he's been on a real estate buying binge.

Carl Cook took over as CEO of the Cook Group after his father passed away in 2011. Cook Group Incorporated is an American privately held company that is involved in the manufacturing of medical devices.

Harry Stine joined his father's soybean cleaning business in 1964. Stine is the founder and owner of The Stine Seed group of companies. He owns the largest private seed company in the United States.

Charles Koch, along with his late brother David, made his fortune building and running the company founded by their father, Koch Industries.

Tamara Gustavson inherited her father B. Wayne Hughes' substantial holdings in self-storage company Public Storage, which he founded in 1972.

Gayle Benson inherited her husband Tom Benson's fortune when he died in 2018. Benson built his fortune in car dealerships and owned the New Orleans Saints and New Orleans Pelicans.

Susan Alfond's father founded the Dexter Shoe Company, which he sold to Warren Buffett for $420 million in Berkshire Hathaway stock in 1993.

Ted Lerner has been one of the biggest names in real estate for decades. In 2006, Lerner bought the MLB's Washington Nationals.

Abigail Jonson is the President of the company started by her grandfather, Fidelity Investments

Daniel Gilbert co-founded the mortgage lending company Quicken Loans in 1985 when he was just 22 years old. He is also the owner of the NBA's Cleveland Cavaliers.

Whitney MacMillan is a major heir to the famous Cargill fortune and is the last member of the family to serve as chief executive of the company. He held this position from 1976 on into 1995, when he stepped down in concession to his advanced age. He is 90-years-old

Leslie Lampton made his fortune after he launched Ergon, Inc., an oil refinery and distribution company. He has since grown the company to include refineries in multiple states, including Arkansas and West Virginia.

Dennis Washington started his construction company, Washington Construction, in the early 1960s, with a single bulldozer and $30,000. Just five years later, the company had grown to be the largest construction firm in Montana. He then began to diversify, expanding into mining and dam construction.

Warren Buffett founded Berkshire Hathaway. He is arguably the most famous and successful investor in history.

Sheldon Adelson is the Chief Executive Officer and Chairman of the Las Vegas Sands Corp., which operates the Sands Expo and Convention Center and The Venetian Resort Hotel Casino. Adelson's source of wealth originates from his partnership in creating the trade show COMDEX for the computer industry.

Andrea Reimann-Ciardelli is a descendant of Ludwig Reimann, who in 1828 joined Johann Adam Benckiser as a partner in his chemical company. Now known as JAB Holding Company, the family business owns such major brands as Coty, Keurig, and Panera Bread. Reimann-Ciardelli sold her JAB stake in 2003.

Donald Newhouse is an heir to the company that owns and publishes The New Yorker, Vogue, and GQ, and owns Florida cable and internet company Bright House Networks, as well as the hugely popular website Reddit.

Mack C. Chase founded Mack Energy Corporation. He founded his business after spending more than 50 years working in the oil and gas fields during his lifetime.

Michael Bloomberg earned his fortune through his financial news and information services media company Bloomberg LP. He owns 88% of the privately held company. Michael is also notable for being the former Mayor of New York City. He campaigned for the Democratic nomination for President of the United States in 2020.

James Goodnight made his fortune by founding analytics software firm SAS in 1976.

Gary Tharaldson launched the Tharaldson Companies, a hospitality business that operates and maintains a number of hotels across the U.S. in the early 1980s. He started with the purchase of one Super 8 Motel and has grown his company into one of the most successful developers of new hotels in the U.S.

Les Wexner is the founder and CEO of L Brands which owns Victoria's Secret, Bath and Body Works and several more retail chains.

Harold Hamm has built his net worth as a key player in Hiland Partners and Hiland Holdings as well as the Oil-exploration Company Continental Resources.

In 2016, Victoria Mars inherited and 8% stake in Mars Inc., the company founded by her great-grandfather.

Jonathan Nelson is the co-founder and CEO of Providence Equity Partners.

Anita Zucker is the widow of Jerry Zucker who was the Governor (Chair) and Chief Executive Officer of the Hudson's Bay Company. Anita assumed the position of Governor of the Hudson Bay Company after her husband's death in 2008.

Alice Walton is the daughter of the late Sam Walton, the founder of Walmart and Sam's Club.

Gail Miller is the head of the Larry H. Miller Group, which she started with her late husband, Larry. The group owns a variety of companies, including the NBA's Utah Jazz.

Jacqueline Mars is an heiress to the candy company Mars, Inc. fortune.

Jeff Bezos, founder and CEO of e-commerce juggernaut Amazon, is the wealthiest man in the world.

Jim Justice II inherited a coal business from his father and still owns mines in five states. In 2016, Justice was governor of West Virginia.

John Menard, Jr. derives his fortune from the home improvement store Menard's. The business has over 300 locations around the Midwest.

John Mars's vast fortune stems from the company his grandfather founded – Mars, Inc. The company makes some of the world's most recognizable candies.