There Are Only Six…Nope, Now Five Billionaires In Hollywood

By Amy Lamare on June 7, 2020 in Articles › Billionaire News

We've said it before: It takes a certain kind of drive, ambition, and commitment to your vision to become a billionaire. This is especially true in Hollywood, where actors and celebrities are very often very well paid, but so few make it into the billionaire ranks. In fact, only six people in Hollywood are currently billionaires. Wait, breaking news, one has just been demoted to not being a billionaire. What sets them apart from their equally hard-working peers? Luck? Determination? A bit of a leg up from family connections? Savvy deal-making skills? A touch of insanity? Well, it is any and all of these depending on which Hollywood billionaire we're talking about.

Let's start with the obvious ones: Steven Spielberg, George Lucas, and Oprah Winfrey. They are the OG Hollywood billionaires. Then we will get into the legit Hollywood billionaire and first billionaire rapper, the one, the only, Jay-Z. Next, we will explore the slightly insane Kanye West and his rise from multi-millions in debt to multi-billionaire. Lastly, we will re-visit the question of whether Kylie Jenner is a billionaire or not. Yes, again. It appears she and Kris Jenner told some lies about the valuation of Kylie Cosmetics, their tax returns, and other pertinent financial facts and figures. 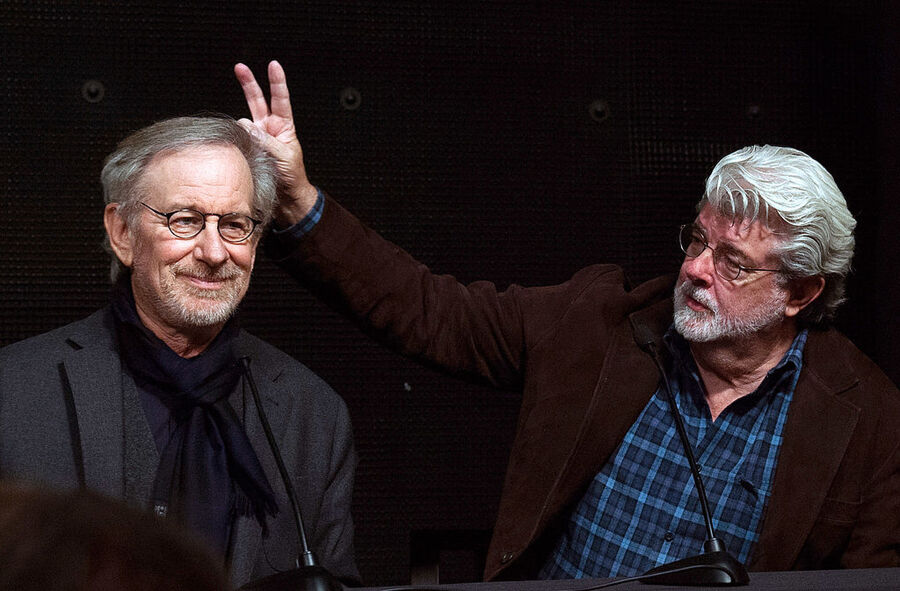 It is only fair that the man who brought us Star Wars and Indiana Jones is far and away the richest person in Hollywood. Of course, most of his money came from selling Lucasfilm to Disney for more than $4 billion in cash and stock in 2012. His highest-grossing film is Star Wars: Episode I – The Phantom Menace, which brought in $474 million at the global box office.

Like Lucas, it's only fair that the man behind Jaws, E.T., and Jurassic Park is one of the richest people in Hollywood. While that has made him a fortune, it's not the bulk of it. A bet he placed with his friend George Lucas on which film would be more successful: Lucas' Star Wars or Spielberg's Close Encounters, earned him 2 .5% of the backend gross of Star Wars. The other transaction that has led to Spielberg's multi-billion fortune is having a theme park clause thrown into his contract with Universal, back in the late 80s. Universal was cash-strapped and couldn't afford an up-front fee like other studios at the time could afford. Spielberg would serve as a creative consultant on any theme park attractions related to his films, and any film he directed would stay at Universal. The theme park consulting perk paid Spielberg 2% of all park ticket revenue as well as a portion of park concession revenue in perpetuity. Spielberg's annual payout exceeds $50 million. That number will keep growing unless he agrees to a buyout. The clause allowed Spielberg a chance to exit the deal in June 2017 and collect a one-time payment equal to the value of the contract. That would have been worth about $535 million in mid-2017. Spielberg elected to stay in the deal and that means he could ultimately see a payout of $1 billion or more for his theme park clause. By 2017, Comcast was the parent company of Universal. Comcast and Spielberg agreed to a new deal in which Comcast took an ownership interest in his film studio, Amblin Partners in a deal that could ultimately pay over $1 billion.

Oprah Winfrey started out as a small town television reporter and became, well, the most famous woman in the world with her 25-year run on The Oprah Winfrey Show. She also owns the production company, Harpo, that put on the show. She leveraged her show's success to build a media empire including her own cable network. She owns 25.5% of her television network OWN, an 8% stake in Weight Watchers, and has a content creation deal with Apple TV+.

Jay-Z has made about $500 million from the 14 number one albums he's released. The rest of his wealth comes from his savvy business investment and ventures. He sold Rocawear, the clothing line he founded, for $204 million. In March 2015, Jay became the majority owner of music streaming service Tidal through a $56 million acquisition. Tidal has been valued at as much as $600 million. Jay-Z's stake in the company is worth $100 million. Jay is the co-founder of the 40/40 Club franchise of nightclubs. The first location opened in New York in 2003. Over the years he endorsed a number of major brands including Chevy, Budweiser, Armadale Vodka, and Hewlett Packard. He is the co-brand director of Budweiser Select and collaborates with the company on marketing and ad development. In 2014, Jay became the majority owner of the champagne company Armand de Brignac. He had previously been a paid endorser of the brand but ultimately decided to buy the company out completely. He also has a stake in Uber worth $70 million.

You would not be alone if you're thinking Kanye doesn't quite have all his marbles. That said, he is Hollywood's newest billionaire and it's not from his music or albums. His streetwear brand Yeezy made him a billionaire. In recent years Kanye has earned at least $100 million from his various endeavors. The vast majority of his earnings have come from royalties and other earnings-related to his Yeezy brand and Adidas partnership. Yeezy separately owns his own Yeezy apparel line outright 100% but earns a royalty on the sales which are reportedly north of $1.5 billion per year.

Kylie Jenner is no longer a billionaire, and literally never was based on lies on the financials of Kylie Cosmetics

Kylie Jenner's net worth has been downgraded to $700 million. When Kylie sold Kylie Cosmetics to Coty, even we had to get on board with the notion that she was a billionaire. But recent reports have revealed that the numbers Kylie and Kris Jenner reported were made up, inflated, false, a lie. That, coupled with a significant drop in Coty's stock after the purchase of Kylie Cosmetics has stripped her of her billionaire status.