By Amy Lamare on July 6, 2016 in Articles › Billionaire News

We understand that calling the In-N-Out founding family the first family of burgers could be controversial… if you've never had a double double animal style, that is. The burger chain has its roots in Los Angeles and a fervent following in Southern California. It was founded by Harry and Esther Snyder in 1948 and remains in the Snyder family to this day. The decades have held triumphs for the family and more than its fair share of tragedies as well.

Today, In-N-Out's heart and soul is still in the Baldwin Park neighborhood where the first burger stand opened 68 years ago. The company's offices are, appropriately, on Hamburger Lane. Next door is an In-N-Out, of course. Not far away lies the location of the first, simple, tiny, burger stand optimistically started by a newly married couple after World War II, when L.A. was going through its post-war growth spurt and everything was filled with hope. 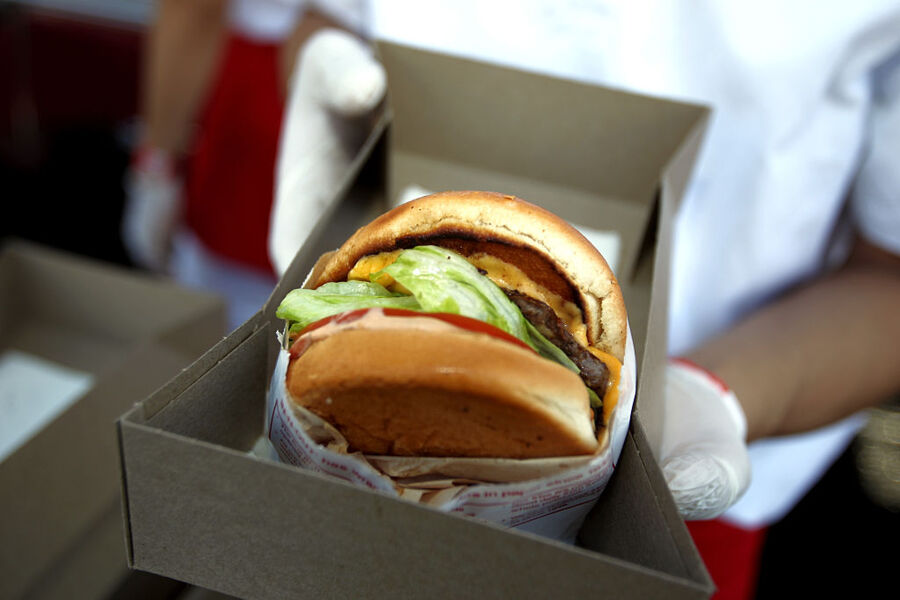 It was September 1947 and Esther Johnson had recently graduated from Seattle Pacific University. She  was living in Seattle and managing a restaurant. Harry Snyder walked through the door to deliver sandwiches. He was tall, a former serviceman, and had worked in food service for most of his life. Esther and Harry fell in love, got married, and moved to Los Angeles. They settled in a small town in the Los Angeles suburbs called Baldwin Park.

Harry came up with the idea for In-N-Out. He thought that people needed a place where they could get quality food quickly. The first In-N-Out opened on October 22, 1948. It featured a simple menu of burgers, French fries, and sodas that isn't much different from what the chain serves today.

In-N-Out was immediately successful. The burger stand sold about 2,000 hamburgers in its first month in business. The success was due largely to the quality of their food. Harry wanted only the freshest ingredients – a trait that remains with the company to this day. Another way in which In-N-Out differed from the burgeoning fast food businesses of the 1950s was in how they treated their employees. The Snyders treated their employees like family and many of them remained with In-N-Out for their whole careers.

The Snyders opened their second In-N-Out in 1951. They also had their first child, a son named Guy, that year. In 1952, their son Rich was born. From the start the brothers were complete opposites. The family moved to San Dimas, a middle class suburb. In-N-Out continued to expand, albeit slowly and strategically. The Snyders made it a personal policy to never buy anything on credit. They also had no interest in franchising. They carefully selected the locations for their restaurants themselves.

Throughout the 50s and 60s In-N-Out's reputation for quality burger grew. It also became THE place to go for celebrities on their way from Los Angeles to Palm Springs. The car culture of the 1950s naturally gravitated to In-N-Out to hang out. In the 1960s, surfers made the burger chain their hangout.

There were 18 In-N-Outs across Los Angeles in 1976, when Harry Snyder died of lung cancer. Esther faced a conundrum when it came time to name Harry's successor. Rich was the obvious choice, even though he was the youngest. He had a mind for business that Guy just did not possess. Guy was a drug addict. Rich became the President of In-N-Out at 24. Esther was the controlling shareholder and Secretary-Treasurer. Guy was named Executive Vice President.

Then tragedy struck. On December 15, 1993, Rich Snyder was killed when his private plane crashed. The day before he died, he had flown to Northern California to see his 10-year-old niece, Lynsi, perform in a pageant. While visiting, he attempted to patch things up with Guy. The two had not been on speaking terms for years. In what now seems like a prescient statement, he said to Guy, "We might not see each other again. You're my brother, and I love you."

After Rich's death, Guy and Lynsi were the only heirs to In-N-Out left. Guy was deeply involved in his drug addiction, yet he was named Chairman of the company. Esther took on the role of President. Lynsi attended a Christian school and was rarely allowed to see the father she adored. That was probably for the best as Guy's addictions had spiraled out of control.

Day-to-day operations of In-N-Out were handled by Esther. The company continued to expand. In 1997, In-N-Out had 124 locations. Then tragedy struck the Snyder family once again. In 1999, Guy Snyder died of an accidental drug overdose. Esther Snyder was 79 years old and had lost her husband and both of her children. The only heir to In-N-Out was her then 16-year-old granddaughter, Lynsi.

Lynsi had her father's wild spirit. She married her high school sweetheart right after graduating from high school and became involved more with the day-to-day operations of In-N-Out. Esther Snyder died in 1999, leaving the billion dollar fate of In-N-Out in 24-year-old Lynsi's hands. Lynsi was named President of In-N-Out on January 1, 2010. Lynsi gained control of 50% of the company in 2012 when she turned 30, and will gain full control when she turns 35 in 2017.

Today, In-N-Out has 310 locations across the Southwest. Lynsi rarely grants interviews, but has made it clear she intends to keep the burger chain the family-owned, privately held business it has always been.

Lynsi Snyder Seawell Martinez Torres Ellingson is married to her fourth husband. She is 34 years old and has four children. She has a net worth of $1 billion.