The Saudi Royal Family May Have Paid $450 Million For A Fake Leonardo da Vinci Painting… A Painting That Sold For $1,000 In 2005

In November 2017, Christie's auction house offered a 500-year-old painting to the highest bidder. Officially titled "Salvator Mundi", but nicknamed the "male Mona Lisa", a 20-minute bidding war waged between a half dozen buyers from all over the world. Bids, which went up in $10 million increments, were made by billionaires and museum curators in China, the US, Qatar, Russia and Saudi Arabia.

Before the auction opened, the 500-year-old Leonardo da Vinci painting was estimated to sell for $100 million.

That price more than doubled the previously-held record for most-expensive piece of art sold at public auction.

After the smoke cleared, the winner of the $450 million da Vinci auction was revealed to be the crown prince of Saudi Arabia, Mohammed bin Salman, AKA "MBS".

Upon closer investigation, it may not actually be a 100% authentic da Vinci.

This claim is according to a new documentary called "The Savior for Sale".

In the documentary, art analysts allege that although the painting was produced in one of da Vinci's workshops, the legendary genius might have, at most, only "contributed" to the painting. 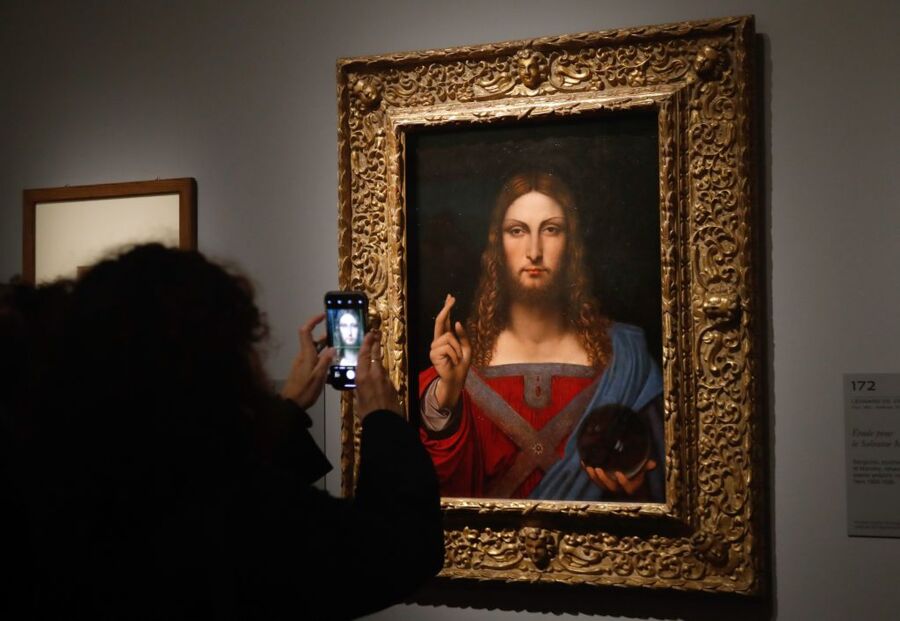 That's how much "Salvator Mundi" would have cost you in 2005.

"Salvator Mundi" was sold for just $1,175 in 2005 by an art dealer in New York. That's not a typo. You could have bought this $450 million painting for a little more than half a "stimmy" check just 16 years ago. After undergoing a restoration, it was authenticated by several British art experts as a long-lost da Vinci.

It was then displayed at London's National Gallery as such. It sold in 2013 to a Russian oligarch for $127.5 million.

The painting has not been seen publicly since the sale. Most people assumed it was hanging on the wall of some Saudi castle or being stored at a highly-secure art warehouse in Switzerland.

In reality, it was indeed hanging on a wall. But not in a castle… on MBS' $500 million yacht "Serene":

And while Serene does have two helipads, a climbing wall, a dozen luxury cabins and three swimming pools, the art world was shocked to learn this is where a da Vinci was being stored. A yacht, even one that cost $500 million, likely does not have the required temperature controls or protection from salty air needed to store a 500-year-old painting.

After winning the auction in 2017, the original plan was to display the painting at the Louvre Abu Dhabi in neighboring United Arab Emirates for around two years. Then in late 2019 the painting was to be moved to the Louvre in Paris which was unveiling a massive exhibit to mark the 500th anniversary of Leonardo da Vinci's death.

A curator at the Louvre planned to display a history of the painting that included research which his team showed da Vinci at least painted the Christ figure in the painting.

That news was very well-received back in Saudi Arabia. It would essentially be a permanent stamp of approval proving they did not pay $450 million for a fake painting.

The documentary, "The Savior for Sale" claims that some members of the French government lobbied on behalf of Bin Salman, due to a concern over the strategic and economic relationship between France and Saudi Arabia.

In the end, President Macron denied Salman's request to give the painting an official stamp of approval from his government.

This left it to the Louvre to negotiate with the Saudi royal family.

Then a second major bone of contention popped up between the Louvre and MBS.

This bone of contention was related to the actual placement of the painting at the Louvre.

MBS insisted his painting be displayed nearly side-by-side with da Vinci's most-famous masterpiece, the "Mona Lisa". The Louvre refused, arguing that the Mona Lisa is held in a custom-constructed room that can barely accommodate the 30,000 daily visitors she sees today.

A compromise was not reached and MBS' da Vinci was shuttled back to an undisclosed location in Saudi Arabia where it will ultimately be displayed in a yet-to-built local museum.

As of this writing there has not been a 100% conclusion on the painting's authenticity.