By Amy Lamare on March 7, 2019 in Articles › Billionaire News

Brendan Kennedy has been on the go since his company, Tilray, went public in July 2018. In fact, he has boarded more than 135 flights, 23% more than he did the year before. His company is in one of the hottest industries to hit the market in eons – marijuana. Tilray sells cannabis for medical marijuana and the growing recreational marijuana markets. The IPO of Tilray not only made Kennedy a billionaire, but also the richest man in the legal marijuana business.

Tilray's headquarters are in Nanaimo on Vancouver Island in British Columbia, a short flight from Kennedy's home in Seattle. Tilray quickly became one of the largest employers on the island of 92,000 people. Tilray's 65,000 square foot cannabis lab and grow facility produces thousands of pot plants that are shipped to tens of thousands of patients, pharmacies, and dispensaries in 12 of the countries where medical or recreational weed is currently legal.

Marijuana is now legal for either medical or recreational use in some 36 countries and 33 U.S. states plus the District of Columbia. There is still a federal ban on marijuana, but the recently passed Farm Bill exempted the hemp plant and its derivative cannabidiol, or CBD, from the federal ban, clearing the way for explosive growth. Legal pot sales are expected to more than double from $10.5 billion in 2018 to $22.2 billion in 2022 in the U.S. alone. Worldwide, that figure is expected to be $31.6 billion. By then, Kennedy expects that the U.S. will have legalized the drug in all 50 states. 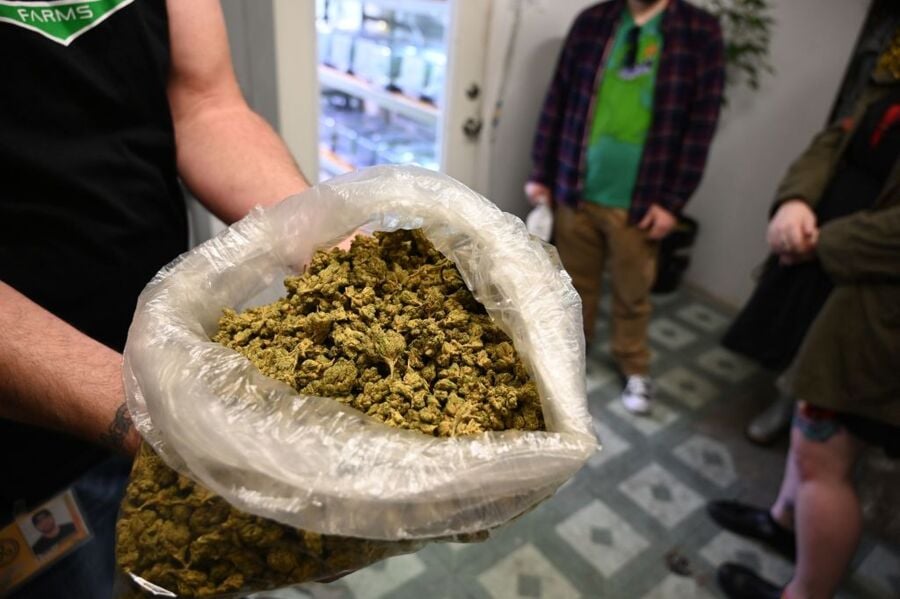 Kennedy grew up in San Francisco as the sixth of seven children. He was never a pot smoker. He was born with a cleft lip that required surgery to repair. He attended an all boys Jesuit prep school called St. Ignatius – where his dad taught science. He studied architecture at UC Berkeley and worked construction during school. Kennedy started and sold two dotcom-era software companies and then went and got his MBA from Yale. In 2006, after business school, he got a job working as an internal analyst  at Silicon Valley Bank. His job was to help venture capitalists and their portfolio companies value their private stock. During the spring of 2010, Kennedy kept coming across data that placed significant value in the cannabis industry.

California was putting a ballot question on legalization before voters that fall. He pulled Gallup poll charts on American attitudes about controversial issues like gay marriage and the legalization of marijuana and found a trend – support for both was growing equally and state laws were following suit. The only doubts Kennedy had about the cannabis industry were his own ambivalence toward the product. He struggled to balance the enthusiasm he heard from cancer patients and military vets with the attitude of his own anti-drug upbringing. Nancy Reagan's old slogan about staying away from drugs haunted him. How could the thing she railed against actually be good for you? However, at the same time, Kennedy didn't think the law's failure to distinguish marijuana from other narcotics like heroin made any sense either.

In the spring of 2011, Kennedy officially quit his job. A few months later, armed with a PowerPoint presentation, he went to the home of the former president of SVB Analytics, his old boss, Jim Anderson. The presentation was the idea for Privateer Holdings, a private equity firm with the mission to acquire and create cannabis companies and brands. His presentation was data driven. He laid out what he expected to happen in the cannabis industry over the next decade. Anderson invested in the first round of funding—that investment has given him a return of more than 100x since Tilray went public. Privateer owns 73% of Tilray. Everything that Kennedy predicted back in 2011 has come to pass.

At times, Kennedy has wondered if he entered the marijuana market too early. In late 2011, he and his co-founders spent their pooled savings on the marijuana and dispensary review site Leafly. The site publishes ratings on cannabis strains – sold legally or on the street – from users all over the world. The lack of data on the cannabis industry terrified the data driven Kennedy. Leafly would give him the data he needed. Monetizing Leafly was another problem. The Yelp of cannabis could not attract investors or advertisers and it was not long before Kennedy had depleted his savings, his 401k, maxed out his credit cards, and borrowed money from family to develop Leafly. At one point, he even emptied the jug of change next to his washing machine for a grand total of $196. There was a night where he didn't even have enough money to order a pizza. Not even Dominos. Not even with a coupon. He didn't mind being broke as much as he worried about what his career prospects would be if he failed. Would he forever be known as the failed pot guy?

Then, in 2012, Washington and Colorado legalized pot. Investors and advertisers wanted a piece of Leafly. In 2013, Canada started its legalization process. Nevada, California, and other states followed. To stay ahead of the competition—which is growing stronger—Kennedy spends a lot of time trying to predict which country will legalize marijuana next. He got a leg up on South Korea as his data predicted that country would be next. They were and the November news that they had legalized medical cannabis shocked everyone except Kennedy.

On July 19,  2018, Tilray became the first cannabis company to have an IPO on the U.S. stock exchange. The IPO raised $153 million with shares at $17. At the peak of the stock price in September, Tilray had risen 1,159% in just two months. It was worth more than Snapchat. Since then stock has fallen off about 50 percent but it is still trading at about 50 times estimated sales.

Even Kennedy, who is a valuation expert, finds it hard to pin down a number for how big Tilray could be. His priority for the foreseeable future is growth—not profit. Street sales of marijuana are still way more common than legal ones across the globe, making it impossible to predict the true demand for cannabis.

Still, Kennedy is absolutely convinced that the end is near for the federal ban on cannabis is the United States. In fact, he predicts that the U.S. will legalize cannabis in 2021. If the U.S. doesn't follow his prediction, it isn't the end for Tilray. He expects more than 70 countries to have legalized medical marijuana by 2021.