Reinventing A Billion Dollar Circus Without Its Biggest Stars

Do you remember going to the circus when you were a child? It was a thrill. The clowns, the acrobats, the amazing men and women on the flying trapeze, and the animals – stepping into the big top was like stepping into a magical world. For me, the elephants were the biggest draw – seeing those majestic beasts up close and personal was always exciting. It was The Greatest Show On Earth. Unfortunately, in recent years, allegations of less than ideal living and training conditions for circus elephants have come to light. As a result, Ringling Bros. faced criticism and lawsuits from animal rights activists.

The elephants were the biggest stars of the big top, but now they've retired. The last of the Asian elephants travelling with the circus were moved to Florida to enjoy life at the Ringling Bros. Center for Elephant Conservation. The endangered animals had headlined the circus since Kenneth Feld's father Irvin bought Ringling Bros. for $8 million in 1967. Then, in 1971, the Felds sold the circus to Mattel for $50 million in stock. Then, in 1982, Ken and Irvin bought their circus back for about $23 million. Today, annual revenues of Feld Entertainment top $1 billion. Now the Feld family has to reinvent The Greatest Show On Earth without their biggest stars. 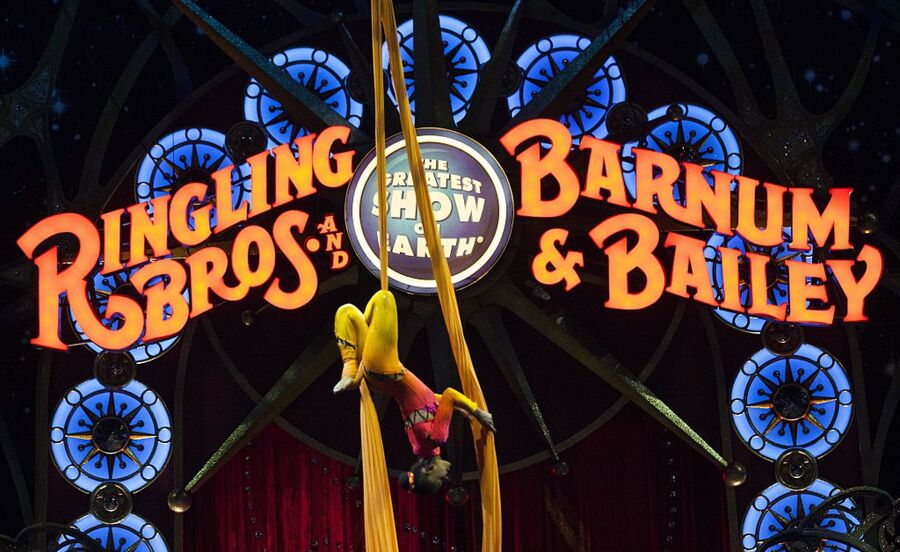 Alana Feld, the third generation of Felds to run Ringling Bros., has some ideas about that. The newest Ringling Bros. show officially premiered in Los Angeles recently. It is called "Out Of This World" and it is the end result of two years of work by Alana and her team. After 50 years running The Greatest Show On Earth, the Feld family is taking a big chance with their new format. Alana Feld has taken her family's circus and put it on ice… literally.

After retiring the elephants, the Felds went back to the drawing board and re-conceptualized the circus for the 21st century. Alana Feld had the idea to move the circus to the ice ring and give it a story line. Not uncoincidentally, Feld Entertainment produces Disney On Ice. During the new show, clowns skate around the arena and twirl up into the air on silk ropes. The narrative of the show takes place in space. Each act – from the flying trapeze to dogs jumping through hoops – takes place on a different planet while the ringmaster battles with an evil queen in space.

The "Out Of This World" circus still features some of the traditional circus acts. The animals, such as lions, tigers, and horses, perform on a circus ring set up in the middle of the ice. It is the Feld family's hope that these changes will attract a new audience in an era where entertainment is on-demand 24/7 via smartphones and other devices.

Of course, The Greatest Show On Earth isn't the first circus to reinvent the medium. Guy LaLiberte mastered that with his Cirque du Soliel. LaLiberte chose to ditch the animals and focus on adult entertainment rather than family entertainment. The rest, as they say, is history. It took Cirque du Soliel less than 20 years to reach the same levels of revenue that it took Ringling Bros. 100 years to make. LaLiberte became a billionaire in 2004.

Ringling Bros. is building on more than 100 years of circus tradition with their new format. Alana Feld isn't trying to change their traditional audience of families. Rather, she's trying to attract a new generation of children to the circus.

Ringling Bros.' "Out Of This World" premiered in Los Angeles and will travel to more than 40 more cities this year. The show has 100 performers and 300 cast and crew members traveling in a more than mile long train. Ringling Bros. has 10 million attendees annually and accounts for 1/3 of Feld Entertainment's annual attendance. All together, Feld Entertainment brought in more than $1 billion in revenue in 2015. It is Alana Feld's hope that this is just the first innovation in her family's circus and that the years to come bring more changes and new shows for new audiences.

Kenneth Feld has a net worth of $1.8 billion.