Robert Maxwell was born into poverty in 1923 in Czechoslovakia. His name was Ján Ludvík Hyman Binyamin Hoch. Though he would rise to wealth and prominence as the owner of the Mirror Group, owner of The Daily Mirror and The New York Daily News, to name just two of the properties in his media empire, his early life was marked with tragedy and his death is still shrouded in mystery.

In 1939, Robert was one of seven children of his parents. By 1944, most of his family had died at Auschwitz after Czechoslovakia, which had been reclaimed by Hungary, was occupied by Nazi Germany. Maxwell managed to escape to France, where he joined the Czechoslovak Army in exile in 1940. He fought across Europe for the next five years. He married Elisabeth Meynard, a French Protestant in 1945. In June 1948, he legally changed his name to Robert Maxwell.  Over the next 16 years Robert and Elisabeth had nine children – Michael, Philip, Ann, twins Christine and Isabel, Karine, Ian, Kevin, and Ghislane. In an interview in 1995, Elisabeth mentioned that they were recreating the family he lost in the Holocaust. Two of his children – Karine and Michael died young.

After the war, he became the British and U.S. distributor of Springer Verlag, a scientific book publisher. In 1951 he bought three quarters of a minor publishing house called Butterworth-Springer, he changed the name to Pergamon Press and built it into a major publishing house fairly quickly. Then, in 1964, Maxwell was elected a Member of Parliament, a position he held through several reelections and lost in 1970. Around the same time, he lost control of Pergamon Press when he misstated the profits, causing him to be expelled from his spot on the board of directors. 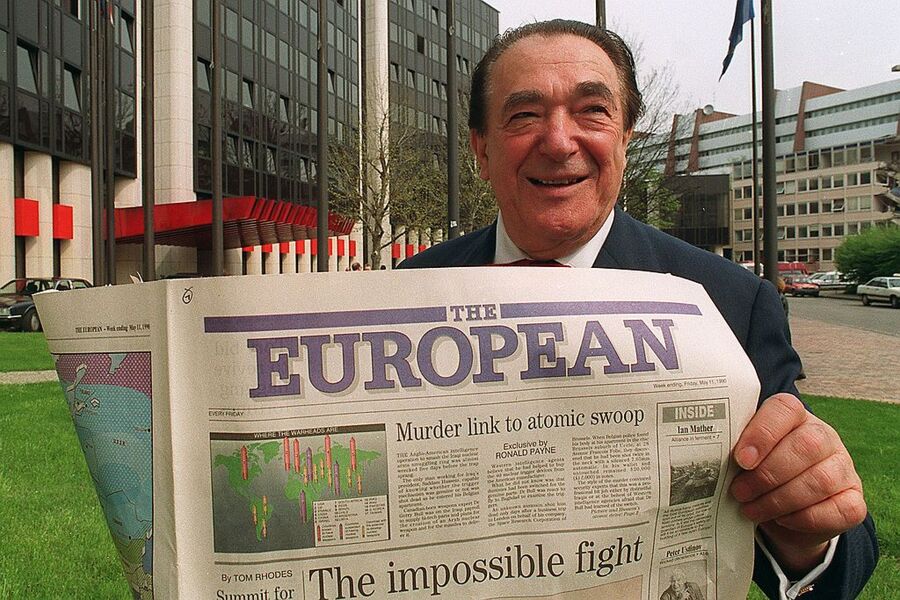 Fast forward to the early 1980s and Maxwell had reinvented himself, this time as the publisher of the London tabloid The Daily Mirror as well as other publications in England and Scotland. He was flying high. He had success, wealth, and a yacht named the Lady Ghislane, after his youngest daughter.

He had long been suspected to be a secret agent, possibly even a double agent or triple agent of a foreign government by the British Foreign Office. He had well known links to MI6 – The British Secret Intelligence Serves, the KGB, and the Israeli intelligence group Mossad. He was often accused of being a long time agent of the Mossad. In fact, when he died, six current or former heads of Israeli intelligence services attended Maxwell's funeral. Israeli Prime Minister Yitzhak Shamir eulogized him, saying: "He has done more for Israel than can today be said." But that's not even the craziest or most mysterious thing about Robert Maxwell – not by a long shot.

On November 5, 1991, Robert Maxwell mysteriously disappeared from his yacht, the Lady Ghislane. His naked body was found floating in the waters off the Canary Islands later that month. What was revealed would shake his family to their core. He was not the wealthy businessman he presented himself as. He was drowning in debt and had been stealing money for years. His business empire was close to ruin and he'd stolen more than $900 million from his employee's pension funds to stave off bankruptcy. Conspiracy theories circulated about Robert Maxwell's mysterious death that make the Jeffrey Epstein suicide conspiracy theories look like child's play.

Maxwell's death was ruled to be a heart attack and accidental drowning, but it seems all too convenient given the fact that investigators on two continents were looking into his financial dealings in the months before he died. Did he jump, fall, or was he pushed from his yacht as it moved through the sea off the coast of Africa. In London, officials were looking for the missing pension funds, which on first glance appeared to come to at least $760 million and would prove to be even more than that. In New York, where Maxwell had recently purchased the New York Daily News, his staff was trying to find shares in Berlitz International that were held by Macmillan Inc, the publishing company Maxwell owned. Somehow, he had transferred those shares without a trace.

His publishing empire collapsed almost immediately. Back in London, the Maxwell family filed for bankruptcy to protect its assets from creditors. The Maxwell family's total debt came in at $5 billion. Assets held by the family were worth significantly less. Did Robert Maxwell commit suicide? Was he murdered? The answer to that was important – his life insurance, worth $35 million, would only pay out if he died of natural causes.

Maxwell spent the last months of his life shuffling money between properties in his public and private holdings. He used loans from one company to pay off debts at another. In one case, he sold shares that were earmarked as collateral for one of his loans.

Over the years, Maxwell has used England's flexible libel laws to silence reports that he was way over his head in debt or that much of his reported $1.9 billion net worth was a high stakes shell game. What's even worse – that nearly $1 billion in pension funds he stole – couldn't be found. Maxwell's son Kevin, who ran the Daily News, said $532 million had been loaned by the publicly owned American group Maxwell Communication Corp. to some of Maxwell's privately held companies. In New York, Macmillan, which owned 56% of all Berlitz shares worth $365 million, could not find them.

Back in the U.K., Scotland Yard was investigating a claim by the Swiss Bank Corp that Maxwell borrowed $104 million, putting up as collateral, shares in a company that he had already sold.

His sons Kevin and Ian went on trial for their father's crimes of defrauding his companies. They were thought to have been in on it. A jury unanimously acquitted both men.

Part of the mystery of what happened to the money was in the web that Maxwell had surrounded his companies with. There was the privately held Robert Maxwell Group Ltd.,  based in the tiny principality of Liechtenstein, where tolerant banking laws permit money to come and go unobserved. This is the group that owned the Daily News; newspapers in Kenya, Hungary and Germany; a money-losing all-European weekly called The European; plus a British soccer team. Then there was the Mirror Group Newspapers which controlled the Daily Mirror as well as horseracing newspapers in Britain and the U.S. This company was public. The Maxwell family owned 51% of the shares. Then there was Maxwell Communications, a U.S. company that the Maxwells own 68% of.

The life of Robert Maxwell can perhaps be summed up best by a reference to him in pop culture. He was the inspiration for the villainous media mogul Elliot Carver in the 1997 James Bond film Tomorrow Never Dies. At the end of the film, M concocts a story to disguise Carver's demise, saying that he died after falling off his yacht in the South China Sea.