President Trump is facing a lot of backlash for his cavalier attitude towards handling the COVID-19 pandemic and with good cause. That said, he's also actively pursuing his reelection efforts for 2020 and he's got diehard supporters – and it's not just rural constituents in deeply red states who see eye to eye with his MAGA efforts. There are plenty of successful billionaires who aren't afraid to open their wallets to the tune of six-figures to millions of dollars for Trump. We know the Democratic candidates draw the Hollywood and Silicon Valley/tech industry crowds to back and donate to their candidate, and Joe Biden certainly has a lot of very wealthy donors and supporters. So does Trump, who is a billionaire himself.

Look, Trump is a divisive president. We don't want to ruffle anyone's feathers, but that is just a fact. Donating publicly to him can come at a cost to the donor's business. Equinox and Soul Cycle faced a backlash from their powerful members after it was revealed that Stephen Ross, one of the execs of the upscale fitness chains' parent company, was planning to host a fundraiser for the president. Customers threatened to boycott Home Depot when one of its founders pledged a portion of his net worth to Trump's reelection campaign. So, this said, it does take a certain amount of, shall we say balls, to publicly lay it out there that you're a Trump supporter at times. I know you all know what I'm saying. This is neither for nor against him, but a simple fact that can be discovered by simply scrolling through your social media timelines and seeing your liberal family and friends fighting with your conservative family and friends.

So, that said, let's take a look at the big movers and shakers publicly and proudly backing Trump's reelection efforts by donating big money to his 2020 campaign for a second term in the White House. And go {insert the name of your preferred candidate here}!

Here are some of Trump's billionaire donors in ascending order of their donation. 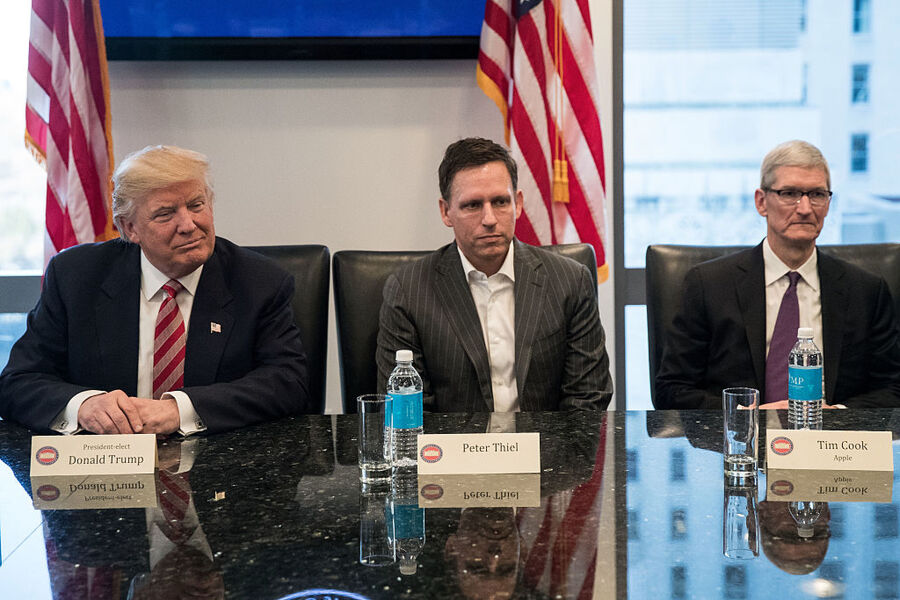 Who is he? Owner of the Washington Redskins

Dan Snyder sold his marketing company, Snyder Communications, in 2000 for $2.1 billion. He bought the Redskins in 1999 for almost $800 million.

Who is he? Owner of the New York City grocery store chain Gristedes Foods

John Catsimatidis made his multi-billion dollar fortune founding and running Gristedes Foods as well as oil refineries and gas stations. He is an avid Trump supporter and backer of building the wall along the southern U.S. border.

Who is he? Revlon investor, leveraged buyout investor

Ronald Perelman owns a large stake in cosmetics company Revlon. He made his fortune through leveraged buyouts of companies he believed were undervalued. Think: Gordon Gekko from the movie Wall Street. He made one large donation to Trump's fundraising committee in September 2017.

Who are they? Founders of Cablevision

Charles Dolan is the founder of Cablevision. He founded the telecommunications empire in 1973 and sold it in 2016 for $17.7 billion. He also owns stakes in Madison Square Garden Co, which owns the New York Knicks and Rangers, as well as AMC Networks. He donated to Trump's reelection campaign for the first time in 2020.

Who is he? Restaurateur and Owner of the Houston Rockets

Tilman Fertitta is the billionaire-businessman behind Landry's Seafood House, Bubba Gump Shrimp Co., and Saltgrass Steak House. He purchased the NBA's Houston Rockets in 2017 for $2.2 billion. He is also a cousin of the Las Vegas-based Fertitta family, owners of several casinos, and former owners of the UFC.

Who is he? The founder of Ashley Furniture

Ronald Wanek bought a home goods retailer in 1976 and renamed it Ashley Furniture and grew it into the largest furniture company in the U.S. He is a first time donor to the President's reelection campaign.

Who is he? Early employee at Microsoft

Charles Simonyi was the 40th employee at Microsoft. He created Microsoft Word and Excel. He left Microsoft in 2002 to found his own software company, but ended up selling that firm to Microsoft and went back to work for the company.

Who is he? Estee Lauder heir

Ronald Lauder is the younger son of makeup mogul Estee Lauder and he inherited her makeup empire. He is the chairman of Clinique Laboratories. He is one of Trump's advisors as well, primarily on relations with Israel.

Who is he? Founder of PayPal

Peter Thiel is one of the co-founders of PayPal. He has been a supporter of Trump for years and donated a quarter of a million dollars to each of his campaigns for President.

Who is he? Hedge fund manager

John Paulson built his fortune running his hedge fund Paulson & Co., and betting against the subprime mortgage market before the crash of the market and financial crisis hit in late 2017. Paulson also supported Trump's 2016 campaign.

Who is he? The billionaire founder and former CEO of Wynn Resorts, casino mogul

Steve Wynn is a casino mogul and founder of Wynn Resorts which owns The Mirage, Treasure Island, Bellagio, Wynn Las Vegas, and Encore. He was the finance chair of the Republican National Committee until his sexual misconduct allegations cropped up in 2018. He left his post with the GOP and his role as the CEO and chairman of Wynn Resorts. Disclaimer: I went to high school with Wynn's daughters.

Who is he? Founder and CEO of private equity firm Blackstone

Stephen Schwarzman built his fortune running the private equity firm Blackstone, which he co-founded in 1985. Schwarzman didn't contribute to Trump's 2016 bid for the presidency, but he has for 2020 and he is also an advisor to Trump, particularly on relations to China.

Who is he? Banker and owner of Beal Bank and Beal Financial Corporation

Andrew Beal is a Texas-based banker who donated $549,400 to Trump's 2016 campaign. He's also donated heavily to his 2020 reelection effort. Beal's bank was a major lender to Trump Entertainment Resorts prior to him being elected president.

Who is he? Billionaire casino mogul and founder of CES trade show

It's not much of a surprise that Sheldon Adelson is a Trump donor as he's a big and longtime supporter and donator to the GOP. Adelson is one of Trump's biggest donors. He's given more than $25 million to the 2016 and 2020 campaigns and the 2017 inaugural festivities. For his efforts, Adelson was awarded the Presidential Medal of Freedom in November 2018.