Today, some of the biggest companies, brands, products and technological innovations in the United States are being built by women. And, most importantly, many women are building their empires without the help of an inheritance, a business partner, or even a husband. Everyone from Sheryl Sandberg to Oprah Winfrey to Meg Whitman have made enormous fortunes on their own. To make this list, women had to have a minimum net worth of $1.5 billion and, if they built their business alongside their husband, they had to have had a substantial part in building the business. To make this list, the women had to have a minimum net worth of $1.5 billion. Without further delay, here are the richest self-made female businesswomen and entrepreneurs in America today.

Kathy Fields and Katie Rodan met at Stanford in 1984. Fields was straight from the University of Miami Medical School and Rodan from the USC School of Medicine. They were in Palo Alto to do their dermatology residencies. They quickly bonded over a shared sense of fashion that their classmates did not share and remained friends as they studied for their board exams and joined separate all male dermatology practices in San Francisco. A few years later in 1989, Rodan found herself  frustrated by the lack of advances in treating acne and felt the market needed a new alternative. So she decided to create the acne solution that wasn't available at the time. The first person she called to tell her idea to was Fields. That's how the Rodan & Fields empire was born.

Kathy Fields and Katie Rodan two set out to create a product to fill the gap they saw in the acne care market. They kept their day jobs while working nights and weekends at their kitchen tables to turn their side project into a wildly successful household name. That product was Proactiv and unlike other acne treatments, Rodan and Fields' formula felt like a high-end beauty cream. 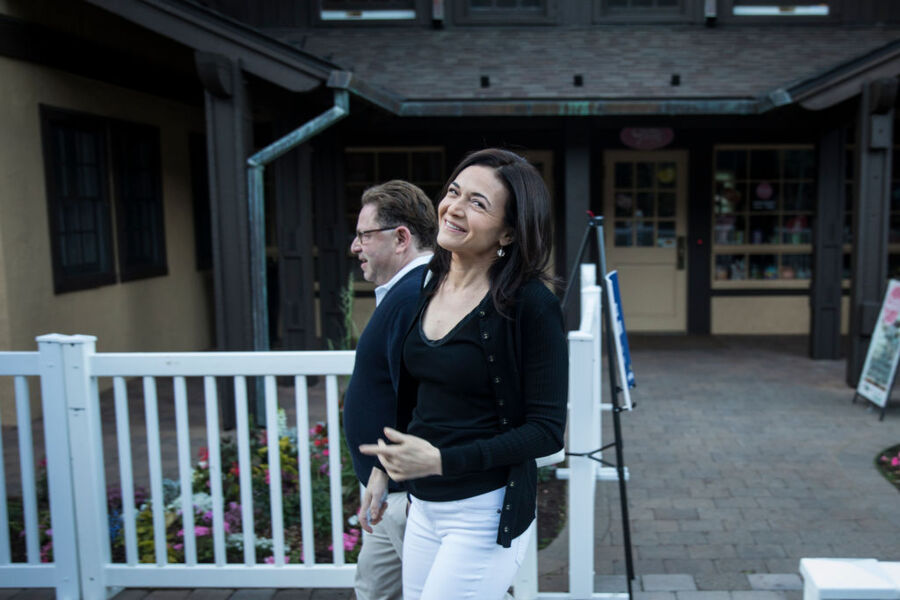 Sheryl Sandberg is COO of Facebook and a member of the social network's Board of Directors – the only woman ever to serve on Facebook's board. Prior to Facebook, Sandberg was Vice President of Global Online Sales and Operations at Google. Her wealth comes not just from a better than average salary, but from shares she holds in Facebook and Google. In 2012 Sandberg was named to the Time 100 list of the 100 most influential people in the world.

Thai Lee is the CEO and President of the largest female-owned company on the planet, SHI. SHI also happens to be the largest minority owned business in the world. SHI is an online marketplace for buying enterprise level printers, servers, cloud resources and computers. Today SHI generates an estimated $6 billion in sales and has 3,000 employees around the world. SHI's clients include Boeing, Johnson & Johnson and AT&T. Lee owns 60% of the company and her ex-husband owns 40%. Lee was born in Bangkok, Thailand to Korean parents. She moved to Massachusetts as a teenager to attend high school. She earned a BA in biology and economics from Amherst College. After college, Lee moved to Korea to work in an auto parts company. She moved back to the U.S. to go to Harvard Business School and received her MBA in 1985. Lee, and her husband at the time paid, less than $1 million to acquire a struggling software company in New Jersey. They had a division called Software House and this is where Lee saw the potential. Since she took over SHI, which stands for Software House International, the company has had positive growth every year.

Elaine Wynn built the Wynn Resorts empire alongside her ex-husband Steve Wynn. Director of Wynn Resorts, Limited, the real estate development firm founded by her husband. Many insiders point to Wynn as the company most responsible for the revitalization of Las Vegas. Wynn Resorts constructed or rehabilitated such Las Vegas hotspots as the Golden Nugget, The Mirage, Treasure Island, Bellagio, Wynn, and Encore. After her divorce, Ms. Wynn received eleven million shares of Wynn Resorts, Limited.

What can be said about Oprah that hasn't been said before? Oprah is best known for The Oprah Winfrey Show, which ran nationally from 1986 to 2001 and was the highest-rated nationally syndicated talk show in history. She has been called the most influential woman in the world. She is one of the world's greatest philanthropists.

Winfrey was born into poverty in rural Mississippi to a single teenaged mother. She was raised in Milwaukee and had considerable hardships and tragic situations happen to her. Winfrey landed a job in radio while she was in high school. By the time she was 19, she was co-anchoring the evening news in Tennessee. Her gift for connecting with her audience eventually landed her a local Chicago talk show of her own – The Oprah Winfrey Show – and we all know what happened next.

Johnelle Hunt made her fortune as a co-founder of J.B. Hunt Transport Services (JHBT), America's trucking giant. A drop-out of the University of Arkansas, she started the trucking business with her late husband Johnnie Bryan Hunt, Sr. in 1969. Through the years, JHBT grew into one of the largest trucking companies in the country with more than 12,000 trucks and trailers that provide transportation services to numerous customers in Canada, U.S. and Mexico. One year after the death of her husband in 2006, Hunt resigned from the company, but she still remains its major shareholder holding 17%. Moreover, in 2012, she was appointed as the Woman of the Year by the Women's Foundation of Arkansas for her contributions to the community.

Doris Fisher founded the Gap in 1969 with her late husband when they could not find jeans that fit right. Originally a retail establishment for Levi's jeans and record stores, the Gap quickly expanded, dumped Levi's and put out their own brand of denim. There are now about 3,000 stores worldwide. The Gap also owns Banana Republic, Old Navy, Piperlime, and Athleta. Doris also has an extensive and valuable art collection, which will be permanently displayed in its own wing at the San Francisco Museum of Modern Art in 2016. 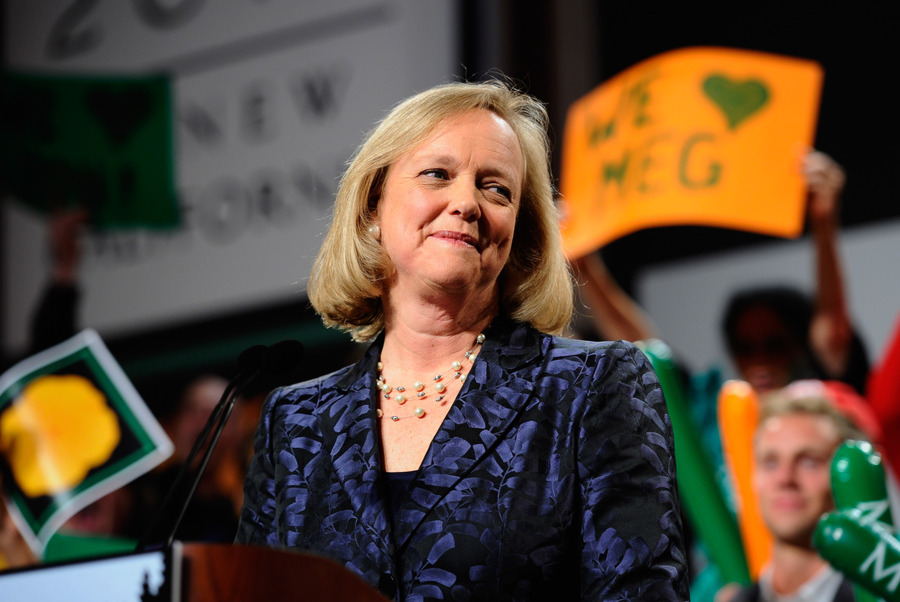 Meg Whitman is the former President and CEO of Hewlett-Packard. Whitman's fortune was largely made when she served as President and CEO of eBay from 1998 to 2008. During her decade with eBay, Whitman oversaw its growth from 30 employees to more than 15,000 employees and $4 million in annual revenue to more than $8 billion in annual revenue. Whitman expanded eBay's services to Europe, Asia, and Latin America as well as oversaw the acquisition of PayPal, Skype, and StubHub. Prior to eBay, Whitman was an executive at the Walt Disney Company, DreamWorks, Proctor & Gamble, and Hasbro. She received her BA from Princeton and her MBA from the Harvard Business School.

If you've ever been on a road trip around the United States, there's a very high probability that you've encountered a Love's Travel Stop. Situated just off long stretches of lonely highways, the bright red heart shaped sign and welcoming interior have soothed road weary travelers and truck drivers since 1964. It's hard to imagine, but there was a time when convenient stations to refuel your car and your stomach simply did not exist. Driving long distances was a very lonely endeavor. That all changed thanks to Tom and Judy Love and their creation, Love's Travel Stops & Country Stores. Tom and Judy started their empire with just $5000 and today it's worth billions.

Judy Faulkner moved to Madison, Wisconsin in the 1960s to attend graduate school in computer science. In 1979 she founded Epic Systems, which is estimated to be used by over 40% of the healthcare and medical industries today. Electronic medical records allow for the easy sharing of patient information and have transformed the practice of medicine over the last 30 years. Epic employs more than 4,000 people in its $500 million, 600,000 square foot campus that has been described as part Disneyland, part Google, and part environmentalists dream.

Epic's integrated suite of health care software supports patient care, including registration and scheduling; as well as clinical systems for doctors, nurses, emergency personnel, and other healthcare providers. Epic also has systems for lab technicians, pharmacists, and radiologists; as well as billing systems for insurance companies.

Marian Ilitch met her husband Mike Ilitch on a blind date in 1954. In 1959 the Ilitches opened the first Little Caesars Pizza in the Detroit suburb of Garden City. Mike wanted to call the pizza shop "Pizza Treat," but Marion nixed that idea. Little Caesar was Marian's nickname for Mike. Little Caesars became the largest carryout pizza chain in the world, known for its TV ads featuring the slogan "Pizza! Pizza!" Today, Little Caesars has locations in 20 countries, employs 23,000 people and had $3.4 billion in revenue in 2016.

While Diane Hendricks didn't make her billions in a sexy industry, she has $3.6 billion of them to keep her warm at night from ABC supply, the largest wholesaler of roofing, window, and siding materials in the United States. The company headquarters is in Wisconsin, but ABC Supply has 500 locations and approximately 5,800 employees. Diane founded the company with her late husband Kenneth. Diane also oversees Hendricks Holdings Co, which has stakes in manufacturing plants and pharmaceutical research.

Lynda Resnick and her husband Stewart own and run the Wonderful Company, which sells POM Wonderful juice, Halo brand mandarin oranges, Fiji water, almonds, and pistachios. It is estimated that almost half of all American households buy one of the Resnick's products. Lynda met Stewart, who is her second husband, when she was pitching her ad agency to get his business while he was President of American Protection Industries. They married in 1973.  Stewart and Lynda Resnick took the first step towards their multi billion dollar fortune when they purchased Teleflora in 1979.

Jin Sook and her husband Do Won "Don" Chang emigrated from South Korea to Los Angeles in 1981 in search of the American Dream. They were broke. They didn't speak very much English. They didn't have college degrees. They were both just 26 years old. What they did have was grit and determination to make it in the coffee industry. Back in South Korea, Don had started a coffee and juice delivery service. He intended to do the same thing in L.A. However, while working at a gas station he noticed all the best cars were driven by clothing retailers and the Changs path was forever changed. Today, Forever 21 has more than 700 stores worldwide and $4.4 billion in sales.