By Amy Lamare on December 7, 2019 in Articles › Billionaire News

To own a pro-sports team is to be in a very exclusive club. In fact, it's a club open exclusively to billionaires. That's true in the NFL, NBA, and the NHL. The 15-richest NHL team owners have a combined net worth near $115 billion. The richest of them all is David Thomson, owner of the Winnipeg Jets. He has a net worth of $33 billion, thanks to his family's media empire. The Boston Bruins, a storied franchise, has been owned by the same man since 1975. Let's look at the 15-richest NHL team owners, their net worth, and how they made their money.

Brian Roberts is the son of Comcast co-founder Ralph Roberts. Brian has been the CEO of the media giant since 2002. He inherited the company when his father died in 2015.

He started as a bag boy at his father's supermarket. After dropping out of college, Ron started the private equity firm Yucaipa Companies and the Ronald W. Burkle Foundation. He has been chairman of the board for Alliance Entertainment, Dominick's, Fred Meyer, Ralphs, and Food4Less. Burkle currently serves on the board for Occidental Petroleum Corporation, Yahoo!, and KB Home. 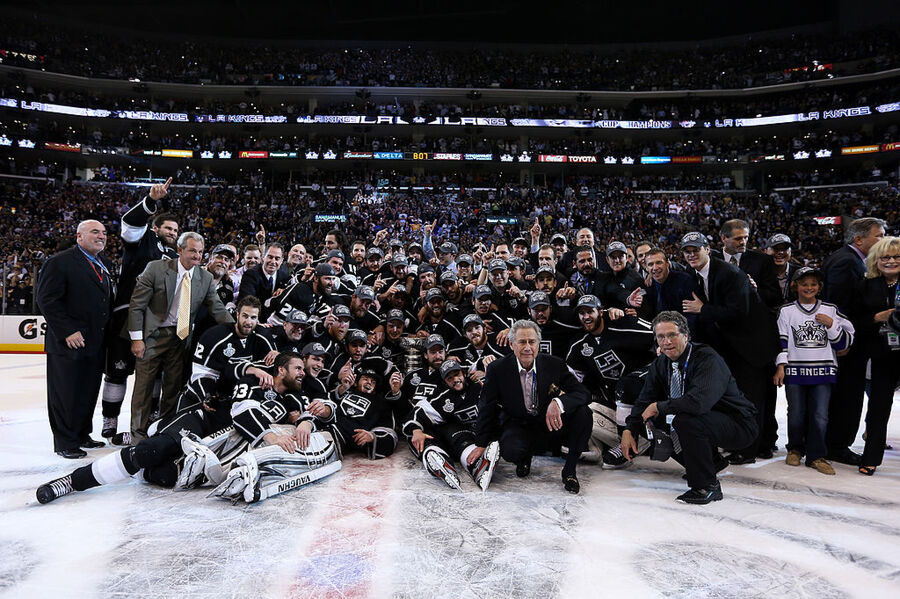 David Bonderman is an American entrepreneur who is part of a team that is bringing the NHL to Seattle. The unnamed team will make its debut in the 2021 season. Born David Bonderman, a.k.a. Bondo, on November 27, 1942, he is a founder of TPG Capital, a prestigious private equity investment firm.

Joshua Harris an American private equity investor who co-founded Apollo Global Management, one of the world's largest alternative investment firms. Harris also owns the NHL's New Jersey Devils. H worked at Drexel Burnham Lambert before co-founding Apollo in 1990 with fellow Drexel alumnus Leon Black and Marc Rowan. He is currently one of three managing partners of Apollo, along with Black and Rowan.

Vincent Viola had a career in the military. He graduated from West Point and then the U.S. Army Airborne, Infantry and Ranger Schools and served in the 101st Airborne Division. He is the former Chairman of the New York Mercantile Exchange (NYMEX) and is one of the nation's foremost leaders in electronic trading. He is currently the Executive Chairman of Virtu Financial. Based in New York City, Virtu was founded by Viola. Virtu Financial is a market maker and liquidity provider to the financial markets worldwide.

Jeremy Jacobs is the American CEO of Delaware North Companies and is the current owner of the Boston Bruins hockey team in the National Hockey League. Born in Buffalo, New York on January 21, 1940, Jacobs attended the University of Buffalo for business management as well as the Harvard School of Business Advanced Management Program. Delaware North was founded by his father and uncles and is a hospitality and food service company. Delaware North also owns the TD Garden. Jacobs purchased the Boston Bruins in 1975 and has owned the team since.

Daryl Katz is the chairman and chief executive officer of The Katz Group, Canada's leading drug store operators. He also owns the nation's only mail-order pharmacy business, Meditrust Pharmacy Inc. He is one of the richest people in Canada. He bought the Oilers in 2008 after several unsuccessful attempts.

Henry Samueli was a professor at UCLA in 1991 when he co-founded Broadcom with Henry Nichols, one of his PhD students. Samueli was born in Buffalo, New York on September 20, 1954, Samueli has his name on more than 70 on U.S. patents as an inventor. He bought the Anaheim Ducks in 2005.

Edward Roski, Jr. is the owner, President and Chairman of the Board of Majestic Realty Co., which is the largest private holder of industrial real estate in the United States. Founded by his father in 1948, the company has acquired more than 70 million square feet of development in a diversified real estate portfolio. Mostly owning industrial buildings in Southern California, the company's properties extend from Los Angeles to Atlanta.

Marian Ilitch and her late husband Mike founded Little Caesar's Pizza. Marian met Mike Ilitch on a blind date in 1954. The couple married a year later. In 1959 the Ilitches opened the first Little Caesars Pizza in the Detroit suburb of Garden City. Mike wanted to call the pizza shop "Pizza Treat," but Marion nixed that idea. Little Caesar was Marian's nickname for Mike. Little Caesars became the largest carryout pizza chain in the world, known for its TV ads featuring the slogan "Pizza! Pizza!" Marian Ilitch is also the owner of the MLB's Detroit Tigers and the NHL's Detroit Red Wings.

After graduating from Pennsylvania State University with a BS in Engineering, Pegula went to work for the Getty Oil company. In 1983, at the age of 32, Terrence branched out on his own by founding an oil and gas exploration company he named East Resources. Over the next several decades, East Resources grew into an incredibly successful company. In 2010, Terrence sold off most of the company's assets to Royal Dutch Shell for $4.7 billion. He sold another chunk of assets to American Energy in 2014 for $1.75 billion. He then used a portion of his funds to purchase the Buffalo Sabres NHL team and the Buffalo Bandits lacrosse team for $189 million. He also owns the NFL's Buffalo Bills.

Ann Walton Kroenke is the daughter of Walmart founder Bud Walton. She inherited half of her dad's stake in the company when he died in 1995. She is married to billionaire Stan Kroenke. Together they own the Avalanche, Los Angeles Rams, Colorado Rapids, and Arsenal FC.

Philip Anschutz chairman of Anschutz Entertainment Group, which owns and runs the Coachella Valley Music and Arts Festival. He made his fortune in oil, railroads, telecom, real estate, and entertainment. Anschutz also owns the NHL's Los Angeles Kings, one-third of the NBA's Los Angeles Lakers, and the team's home arena, Staples Center. Through Anschutz Entertainment Group (AEG), he owns and operates many of the best concert venues in the world, including the aforementioned Staples Center as well as the Nokia Theatre in Los Angeles, O2 in London, and the Mercedes-Benz Arena in Shanghai.

Hasso Plattner made most of his fortune as the CEO of software company SAPAG, which he founded along with four of his former IBM colleagues in 1972. Plattner stepped down from the CEO role in 2003 and has chaired the company's supervisory board ever since. Today SAPAG brings in $24 billion annually.

David Thomson and his family top the list of richest Canadians, thanks to the company that David's grandfather Roy started in 1934 when he acquired the newspaper Timmins Daily Press. The Thomson Corporation media empire grew to include The Times of London and Scottish Television and numerous daily newspapers in the United States. When David's father, Kenneth took over the company in 1976, it was worth about $500 million. When David took over from his father in 2006, it was worth almost $30 billion. Two years later, the company acquired Reuters and became Thomson Reuters, with David at the helm.