By Amy Lamare on November 13, 2019 in Articles › Billionaire News

Out of the 30 teams in the National Basketball Association today, 15 are owned by billionaires. The rest of the owners may not be billionaires, but they are, without a doubt, extremely rich. If someday you dream of owning an NBA team, it would certainly help to start planning now for a lucrative career in the financial or real estate industries. As you are about to learn, a great many current NBA owners made their money (and their connections) in one or both of those fields. Every once in awhile a psychologist, technology billionaire or even a chemist sneaks into this ultra-exclusive club, but by and large, being involved in private venture capital or real estate will give your visions of NBA team ownership a big leg up.

And who wouldn't want to own an NBA team if you had the means to buy one? Not only have NBA franchises proven over the years to be highly lucrative investments, as the team owner, you get to be on a first-name basis with some of the biggest sports superstars in the world. I mean, how many times a week do you think Mark Cuban calls Luca Doncic late at night just to say hi and chit chat? I bet Steve Ballmer tries to FaceTime with Kawhi Leonard constantly. But we're getting off-topic. Let's take a look at how each and every one of these businessmen, tycoons, magnates, and entrepreneurs became rich enough to own an NBA team. 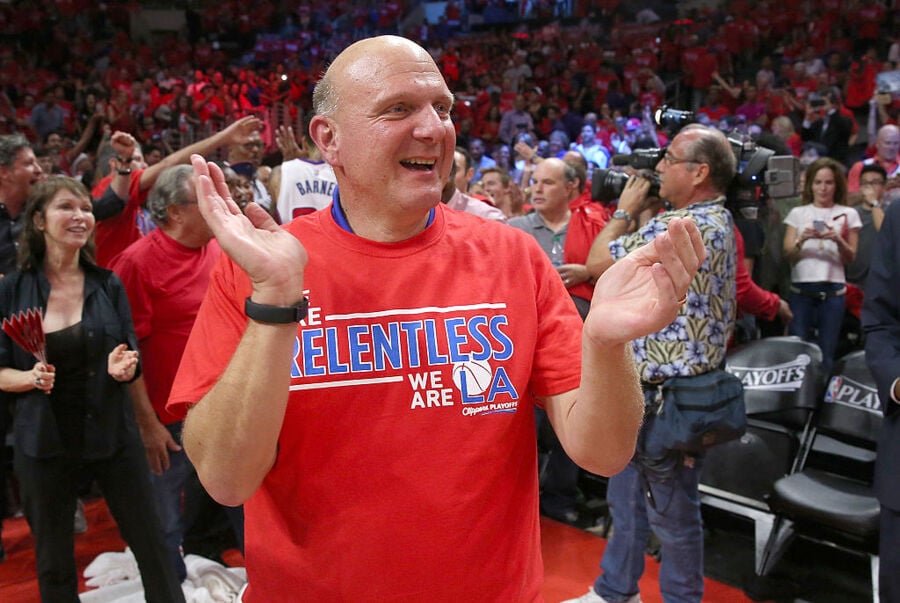 Michael Jordan needs no introduction. The legendary Chicago Bull set sports records by becoming the first athlete to earn a salary of over $30 million per year. Even though he retired from professional basketball (for the final time) in 2003, he still earns about $80 million per year from endorsements, with $60 million of that coming from royalties on Nike-Jordan branded merchandise.

Antony Ressler earned his billions as the founder of an LA-based asset management firm called Ares Management, LLC. Ares Management currently oversees more than $40 billion in assets. A fun little fact about Tony is that he is married to "Sixteen Candles" and "Less Than Zero" actress, Jami Gertz. Together, Jami and Tony are consistently two of the most generous philanthropists in LA. They have donated tens of millions of dollars to a wide variety of causes over the years.

Robert Pera is the founder of Ubiquiti Networks, Inc. He has been CEO since October 2005. Prior to that, he was a hardware engineer with Apple. He went out on his own with the goal of bringing affordable wireless internet access to emerging markets.

Michael Rubin opened a ski shop in Pennsylvania as a teenager with the money he got as gifts at his bar mitzvah. He went on to found the athletic equipment brand KPR sports and e-commerce company GSI Commerce. He sold GSO to eBay for $2.4 billion in 2011.

Glen Taylor worked at Carlson Wedding Service during and after college. The shop was a print shop specializing in formal invitations. In 1973, owner Bill Carlson wanted to retire and Taylor offered him $2 million over 10 years to buy the company. This purchase (which he paid off early) formed the basis for the Taylor Corporation, a privately-held multinational printing company with more than 15,000 employees and based in Minnesota. Taylor continues to serve as chairman and CEO. Taylor was a Minnesota State Senator from 1981 to 1990, serving as assistant minority leader from 1983 to 1985 and Minority Leader from 1985 to 1988. Taylor purchased majority ownership of the Timberwolves basketball team in 1994.

Gayle Benson started off as an interior designer. She inherited the Pelicans and the NFL's New Orleans Saints when her third husband, Tom Benson, died in 2018.

Israel-born Tom Gores moved to the U.S. at age five. He made his money through private equity investments. Not sexy, but effective. He is the founder of Platinum Equity, a global private equity firm headquartered in Beverly Hills.

Cuban began his career in Dallas in 1982 as a bartender, before landing at Your Business Software, one of the first PC software retailers in Dallas, as a salesperson. Less than a year later, Cuban started MicroSolutions with support from his previous customers. In 1990, he sold MicroSolutions to CompuServe for $6 million. In 1995, Cuban, with a partner, started Audionet, which in 1998 would become Broadcast.com. In 1999 Broadcast.com was acquired by Yahoo! for $5.9 billion in Yahoo! stock.

After that, Cuban diversified his wealth to avoid being too heavily invested in any one industry that could suffer a crash. In 2003, he purchased Landmark Theatres. He is also one of the Sharks on ABC's Shark Tank.

Dan Gilbert founded Rock Financial in 1985. The company grew to become one of the largest independent mortgage lenders in the U.S. In the late 1990s, Rock Financial launched its internet strategy and quickly became the fastest-growing direct mortgage lender on the Internet which led Intuit to purchase Rock Financial in 2000 and rebrand it as Quicken Loans. Gilbert remained with the company as CEO. In 2002, he formed a group of private investors to purchase Quicken Loans back from Intuit. He also owns Rock Ventures, of which Rock Gaming is a division. Rock Gaming opened its first casino in downtown Cleveland in 2012.

Ann Walton Kroenke is an heir to the Walmart fortune. She inherited stock from her father Bud Walton after he died in 1995. She is married to Stan Kroenke and co-owns a number of sports teams including the Los Angeles Rams, Colorado Rapids, and Arsenal FC.

Mickey Arison is heir to the Carnival Cruise empire. His father Ted founded the company which Micky now runs. Ted Arison is also one of the original owners of the Miami Heat and the richest person in Florida.

Joseph Tsai is part of the group that founded Alibaba in 1999. He's the second-largest individual shareholder of Alibaba after Jack Ma. He bought the nets in September 2019 and also owns the MLS franchise Los Angeles FC.

Steve Balmer's fortune comes of course, from being the 30th employee of Microsoft. He joined Bill Gates' company in 1980 and left in 2014.