The 12 Most Philanthropic Tech Billionaires

By Amy Lamare on February 9, 2019 in Articles › Billionaire News

Philanthropy is a big part of the lives of some of the world's richest people and thank goodness that's the case! The influx of money and increase of the wealth of a number of Silicon Valley residents has led to an increase in donations to charity. In fact, of the top 50 philanthropists of 2017, according to the Chronicle of Philanthropy, 60% of them came from the tech industry. One notably philanthropic person not on this list is Warren Buffett. He donates more than half his wealth to charity, but he is not in the tech industry, thus not on this list.

How he made his billions: Page cofounded Google with Sergey Brin in 1998.

Donations made: Brin has donated to charities that focus on Parkinson's research, including the Michael J. Fox Foundation. Page has donated hundreds of thousands of Google shares to the Carl Victor Page Memorial Foundation which he named after his father and founded in 2006. He has pledged $25 million to fight Ebola.

How he made his billions: Ma is the cofounder of Alibaba Group, one of the largest e-commerce companies in the world. Alibaba is known for having one of the biggest IPOs in history when it went public in 2014.

Donations made: Ma runs the Jack Ma Foundation.He announced his retirement from the role of executive chairman of Alibaba so that he would have more time to dedicate to charitable giving. His foundation focuses on improving China's education system, especially in rural areas. 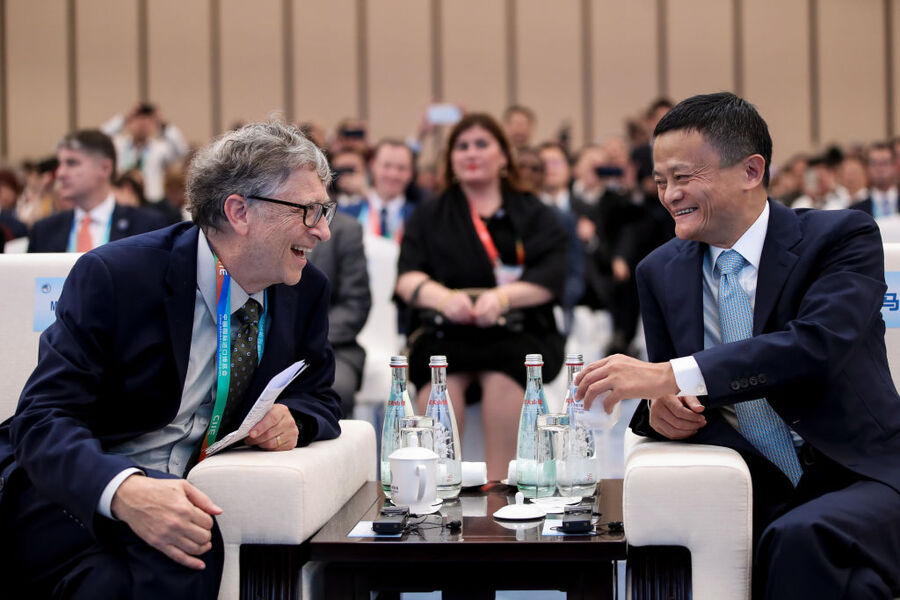 How he made his billions: Ballmer is a former CEO at Microsoft who was the company's 30themployee.

Donations made: Ballmer and his wife oversee the Ballmer Group, which focuses on "efforts to improve economic mobility for children and families in the United States who are disproportionately likely to remain in poverty." The foundation has pledged millions to the University of Washington, the University of Oregon, and Harvard University.

How he made his billions: Son is the founder and CEO of Japanese investment firm SoftBank, which has invested huge amounts of money in tech startups including Uber.

Donations made: Son donated $120 million to help the victims of the 2011 Japanese earthquake and tsunami that resulted in more than 15,000 deaths. Son is also the founder of the Masason Foundation, which aims to "support those who will create the future."

How she made her billions: Powell Jobs inherited billions of dollars worth of Apple and Disney stock from her late husband, Apple co-founder Steve Jobs.

How he made his billions: Ellison is the cofounder of Oracle.

Donations made: Ellison has donated millions to healthcare and educational causes. Notable donations include a $200 million to USC to create a cancer research center and $100 million to eliminate polio. He is a member of the Giving Pledge.

How he made his billions: Zuckerberg is the cofounder and CEO of Facebook.

Donations made: Zuckerberg and his wife, Priscilla Chan, have donated more than $1 billion toward education and medical research, including a multi-million-dollar donation to a San Francisco hospital that was later named after Zuckerberg. In 2015, the couple founded the Chan Zuckerberg Initiative and pledged they would give away 99% of their Facebook shares to charity during their lifetimes. Zuckerberg and Chan are members of the Giving Pledge.

How he made his billions: Brin cofounded Google with Larry Page

Donations made: Brin has donated to charities that focus on Parkinson's research,  including the Michael J. Fox Foundation.

How he made his billions: Ma is the founder and CEO of Tencent, which owns the messaging platforms WeChat and QQ, as well as several successful video game brands.

Donations made: Ma donated 100 million of his personal shares of Tencent to the Ma Huateng Global Foundation to support "medical, educational, and environmental causes in China."

How he made his billions: Slim and his family control America Movil, one of the biggest Latin American telecoms. Slim's holding company, Grupo Carso is also a billion dollar company.

Donations made: Slim donated $4 billion to his philanthropic organization, the Carlos Slim Foundation.

How he made his billions: Dell is the chairman and CEO of Dell Technologies.

Donations made: Dell and his wife established the Michael and Susan Dell Foundation in 1999, which focuses on children living in poverty. In 2016, Dell pledged $36 million to help the rebuild of Houston after Hurricane Harvey.

How he made his billions: Gates cofounded Microsoft.

Donations made:  Gates and his wife established the Bill and Melinda Gates Foundation, which is the largest private charitable foundation in the world. The foundation focuses on global health and poverty. Gates has donated more than $36 billion since the 2000 launch of the foundation. In 2010, the Gates family and Warren Buffett launched the Giving Pledge.