Liliane Bettencourt is the richest person in France and the third-richest woman in the world with a net worth of $40 billion. She is the sole heir to L'Oreal, the largest cosmetics company in the world, which was started by her father, and a large shareholder in Nestle. Liliane is one of the most talked about billionaire socialites in France. She is a private person who shares little about her life with the press, however, she manages to make headlines again and again, in her native France for one scandal after the next.

Nearly a decade ago a trial forced Liliane's personal business into the public light, laid bare her obsession with a flashy homosexual photographer whom she turned into a billionaire, destroyed her relationship with her daughter, turned a long time family butler against her, and, finally, turned the dowager heiress into even more of a recluse than she had been before. Mon Dieu! 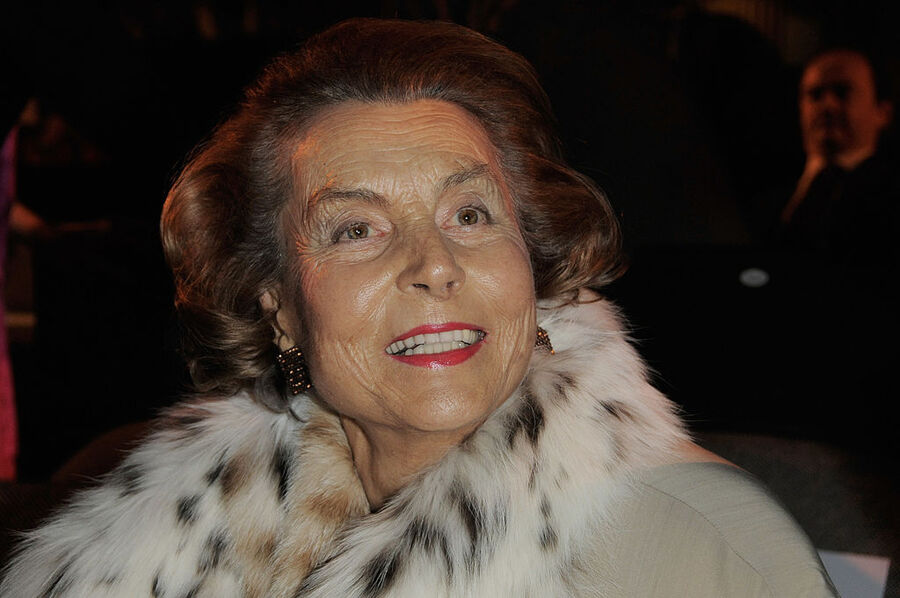 Liliane was a famous French beauty in her youth, courted by many. She chose Andre Bettencourt as her husband, and, for most of her life led a very proper life with her buttoned-up politician husband. But then she turned 65 and things changed. Liliane fell under the influence of a young, charming photographer named Francoise-Marie Banier. The relationship between the aging heiress and the photographer set tongues wagging. Ultimately, it created a power struggle between Liliane and her only daughter, Francoise. Money went missing, lawsuits emerged, and secret tapes were uncovered that shocked France.

In 2008, Liliane became the center of a trial and media frenzy over a lawsuit filed by Liliane's daughter Francoise against Francois-Marie Banier, whom Francoise accused of taking advantage of her mother. Banier vehemently denied the charges that he participated in abus de faiblesse – the exploitation of a physical or psychological weakness for personal gain. The lawsuit alleged that over the course of Banier's friendship with Liliane, he compelled the octogenarian heiress to bestow gifts worth $1.5 billion on him as well as make him the sole heir to her fortune, minus her stake in L'Oreal. But how did the 65-year-old heiress and the flamboyant gay man about town become so close?

Banier had arrived in Paris as a nobody, but it didn't take him long to find his way into the most exclusive circles of Parisian society. Banier was a handsome young gay man who kept company with Salvador Dali, Yves Saint Laurent, and Francois Mitterrand, to name just a few. He liked celebrities. And Liliane was a celebrity in her own right. By the time the two unlikely friends met, Liliane was depressed. She was aging, her famous beauty was fading, and she was bored with her life with her husband. It has even been said that Liliane wasn't all that fond of her daughter, whom she found to be more like her husband – all too somber. Liliane became fascinated to the point of obsession with Banier, and he knew how to play Liliane all too well.

He became an established presence in her home immediately. He told her what to wear and how to act and what to do. Bettencourt was incredibly generous with him. In fact, she declared herself his patron and began to redirect millions in his direction. She bought him a five story building in Paris. She set up a private real estate trust and made Banier the co-owner. He went on a property buying spree. The friends visited the best art galleries. He wanted paintings by the masters and a lot of them. Liliane signed her personal art collection worth more than $100 million over to Banier.

Francoise and her husband, Jean-Pierre Meyer, were furious. And then, in 2006, Liliane fell hard in an accident at her villa in Majorca. After that she was often profoundly disoriented. Banier brought in his own people to take care of Liliane. At one point, the heiress was taking 52 pills every single day. At this time the money given to Banier began to flow more freely. She transferred the bulk of what became Banier's personal fortune to him between 2006 and 2010.

In 2007, Liliane asked her accountant, Claire Thibout, to retrieve her vast jewelry collection from the walk in safe at the bank and bring it to her house. The jewelry collection encompassed floor-to-ceiling shelves and drawers of diamond and pearl rings, necklaces, bracelets, and tiaras as well as brooches and other items worth tens of millions of dollars. Her entire jewelry collection was uninsured. Thibout feared Banier was behind the request. She told Francoise, who wanted her to testify against Banier.

Not long after, Andre Bettencourt died and Francoise filed a lawsuit to have her mother put under protective custody. She wanted the court to appoint a guardian to oversee her mother's affairs. This would mean Liliane would lose control of the voting stocks she had long controlled and held onto at L'Oreal. Also, Liliane had always feared being forced under the control of her daughter and son-in-law. She believed that Jean-Pierre, an executive at L'Oreal, was a gold digger.

Andre Bettencourt's long time butler, Pascal Bonnefoy, proved to be the game-changer in this ongoing family scandal that so captivated the people of France. He was an integral part of the Bettencourt household, but not loyal to either Liliane or Francoise. He hid a tape recorder in the room where Liliane held strategy sessions with her financial advisors, primarily Patrice De Maistre. The tapes were later featured in the trial. They revealed that De Maistre had duped Liliane into a number of questionable deals, but also that Liliane had no idea how much money she had given to Banier. She had no memory of writing a will that left her entire personal fortune to the photographer. She also was unaware that she had gifted him a private island in the Seychelles. The real betrayal came from De Maistre, who was presenting papers for his confused 90-year-old boss to sign, that surrendered legal control to him. He also asked her to buy him a luxurious yacht.

As a result of the trial, the strained relationship between Liliane and her daughter was permanently damaged. The two no longer speak to each other. In 2011, after a three-year legal battle, Liliane's fortune was placed under the guardianship of her daughter. The elderly widow now suffers from dementia.

As for Banier, he was originally sentenced to three years in prison and ordered to pay back $18 million in gifts. He had already surrendered his claim on Liliane's personal fortune that she had directed be given to him in her will. Banier appealed the verdict in the case and that judgment dropped the fine. Banier remains a rich man.