By Amy Lamare on February 15, 2017 in Articles › Billionaire News

The drug world has been ruled by two men since the late 1970s,  Pablo Escobar and Joaquín "El Chapo" Guzmán, the most powerful drug lords, ever.

Escobar peddled his wares from Colombia via his Medellín cartel while El Chapo made his mark in Mexico with his Sinaloa Federation. Both men sent massive amounts of cocaine and other drugs throughout the world during their reigns. Escobar's fall from grace was in 1993 whereas El Chapo's appears to be right now via his extradition to the U.S. in January to face drug trafficking charges.

Both drug kingpins amassed insane amounts of wealth. They both also led reigns of terror unlike any the world has ever seen.

Let's take a side by side look at the two most notorious drug pushers of all time.

Pablo Escobar was often referred to as El Patron and the King of Cocaine. He ruled the cocaine trade and  became one of the richest men in the world as a result.

Escobar was born in 1949 to a poor family of farmers near Medellin, Colombia. His life of crime started with a number of petty crimes in his youth. His career in drug trafficking began when he started smuggling marijuana. He got into the cocaine trade in the late 1970s. He benefitted from his location as Colombia is one of the world's biggest cocaine producers. By the early 1980's Escobar's Medellin cartel was shipping 15 tons of cocaine to the U.S. every single day.

At the height of his power, Escobar's drug traffickers in the Medellin and other cartels were handing over 20% to 35% of their cocaine profits to Escobar because El Patron was the only one who successfully shipped cocaine into the United States undetected.

As head of the Medellin cartel, Escobar controlled 80% of the global cocaine market. He brought in an insane $420 million a week by providing those who seek a cocaine high with the drug they craved. It is impossible to truly quantify Escobar's wealth due to the nature of the drug business, but estimates of his net worth run as high as $30 billion.

Escobar made so much money that he couldn't launder it fast enough and built in a 10% loss in profits each month. He stashed piles of cash in Colombian farming fields, vacant run down warehouses, and in the walls of the homes of cartel members. That 10% write off is equal to roughly $2.1 billion a month.

Despite his status as the world's most dangerous drug lord of his era, El Patron was a man of the people. He built apartment buildings and soccer fields. He handed out cash to the poor and was fairly beloved in some Colombian circles.

Eventually the Colombian government caught up with him. The clash between the government and the Medellin cartel caused years of violence in Colombia.

In 1991, Escobar agreed to a deal to go to prison, but not just any prison. He was incarcerated in a self-designed prison he named "La Catedral." The prison had a soccer field, barbeque pit, and patios. Nearby he built a compound for his family to live in.

Included in his deal with the Colombian government was that Escobar was allowed to choose his fellow prisoners as well as who worked in the prison. He was also permitted to continue to run his cartel and receive visitors. Additionally, the Colombian authorities were not allowed within three miles of Escobar's prison.

All was well until rumors of Escobar's continued criminal activities began to be exposed by the media. The government tried to move Escobar to a more conventional jail on July 22, 1992. However, his contacts disclosed the plan to him in advance, allowing him to make a well-timed escape.

Escobar and his family fled from authorities. and changed locations every two days. One of their hideouts was in the Medellin mountainside. His young daughter, Manuela, became hypothermic from the cold so he set $2 million in cash on fire to warm her up.

Eventually, Escobar's luck ran out. On December 2, 1993, Colombian authorizes burst through the door of the house he was hiding out in. He made his way to the roof to attempt escape but instead met the bullet that ended his life on the day after his 44th birthday. 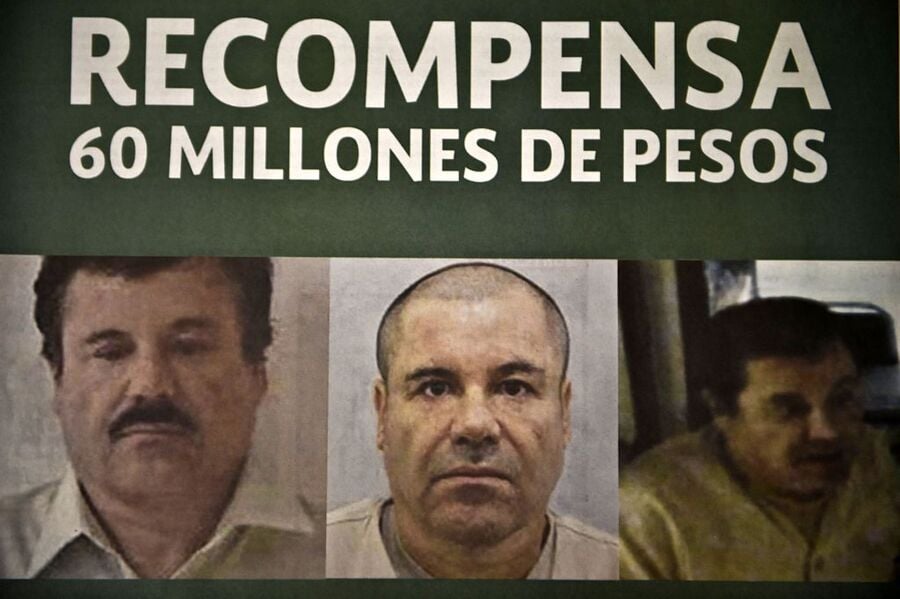 Joaquín "El Chapo" Guzmán was either born in 1954 or 1957 in La Tuna, Sinaloa in northwestern Mexico. As head of the Sinaloa cartel, El Chapo oversees marijuana and poppy fields that cover more than 23,000 miles of Mexico. For comparison, that is larger than the entire country of Costa Rica. El Chapo has a network of operatives and traffickers in 17 of the 32 Mexican states, an extensive network in the U.S. and 50 other countries. El Chapo and the Sinaloa cartel are global.

It is estimated that Sinaloa controls 35% of the cocaine made in Colombia. Sinaloa supplies 80% of the cocaine, marijuana, heroin, and methamphetamine that flows into Chicago every year. El Chapo has an estimated net worth believed to be as high as $14 billion.

The Sinaloa cartel is especially powerful because its reach extends far from North America. There have been reports of cartel activity in Hong Kong, Australia, and the Philippines. The cartel is also rumored to be trying new routes to expand throughout Asia and Africa.

El Chapo was rising to power in the Sinaloa cartel at the same time that Pablo Escobar was on the run in Medellin. In 1993, the same year that Escobar was killed, El Chapo was arrested in Guatemala after fleeing a shootout in Guadalajara that killed a Catholic cardinal. He was sent to a Mexican prison.

In 2001, El Chapo escaped from prison by hiding in a laundry cart he managed to evade authorities for 13 years and was recaptured in Mazatlan in February 2014.

Prison did not deter his duties managing the enormous Sinaloa cartel. Prison also would not hold El Chapo for long. He escaped again 17 months later with the help of his cartel operatives, who dug a tunnel under the prison more than a mile long to free their drug kingpin.

El Chapo was on the run for six months before being captured in January 2016.

In May 2016, a blackout at the jail El Chapo was being held at spooked Mexican officials. Afraid that he would escape again, they abruptly moved him to another facility. It would not have looked good for Mexican authorities if he escaped a third time.

El Chapo was extradited to the United States in January 2017 and is currently in a high security prison in Manhattan as the legal proceedings against him take place.

U.S. prosecutors claim that many of El Chapo's operatives and fellow drug trade people –including Colombian traffickers—are ready to testify against him.

There is a new cartel in Mexico vying to take the place of Sinaloa. The Jalisco New Generation cartel is  believed to be the organization behind recent violence and chaos throughout Mexico. In June, a number of armed men burst into El Chapo's mother's house where several people were killed. In August, gunmen entered a restaurant in Puerto Vallarta and kidnapped El Chapo's son Alfredo. He was released unharmed a few days later.

With El Chapo in jail in the U.S., the cartel and its network are growing fragmented and the Jalisco New Generation cartel is making a play for power.