By Amy Lamare on February 12, 2021 in Articles › Billionaire News

Stitch Fix debuted in 2011 to provide women with curated boxes of clothing chosen for them by stylists. It was founded by Katrina Lake. Stitch Fix is a personal styling service that charges a monthly one-time styling fee of $20, which can be applied to any item you buy from the box. The customer fills out a styling profile online and then a Stitch Fix stylist chooses five items to send to the customer. Once received, the customer has three days to choose to keep some or all of the items or return some or all of the items. If the customer keeps all five items, she gets 25% off the total cost. The "Fix" as the box is called, is scheduled by the customer to come once a month, every two weeks, every two months, or however often she wants it. Lake started Stitch Fix out of her Cambridge, Massachusetts apartment to give busy women an easier way to shop.

Stitch Fix's stock price has skyrocketed during the pandemic as people went online looking for safe ways to shop. In October 2020, Lake's net worth was just $360 million. Shares in her company have almost tripled in the last three months, making Lake's just over 10% share in Stitch Fix worth $1.1 billion. Lake is one of 19 self-made female billionaires in the U.S. 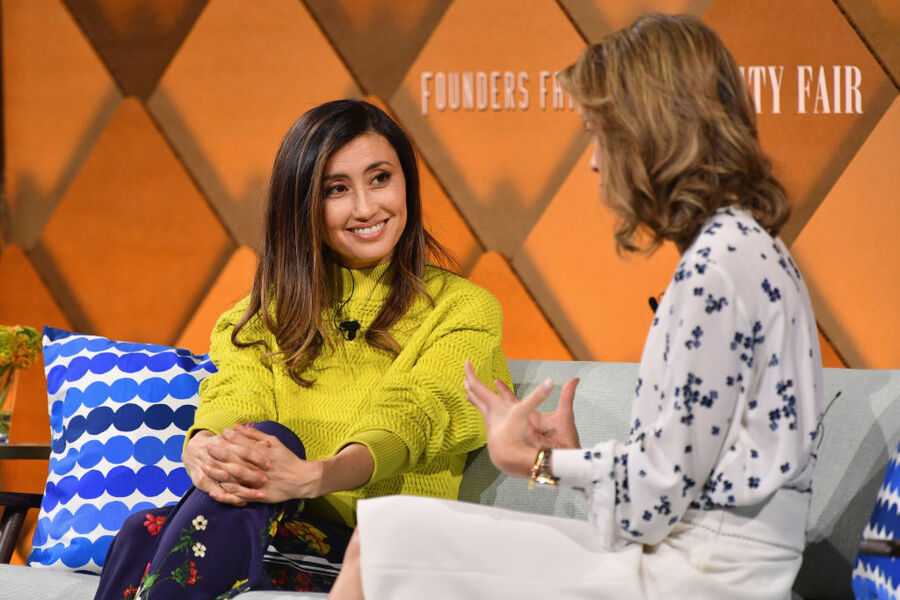 Katrina Lake was born on Christmas Eve 1982 in San Francisco. Her mom is a Japanese immigrant and public school teacher. Her father was a doctor. She initially planned to follow in her dad's footsteps and become a doctor. She enrolled at Stanford and got her BA in 2005. She became interested in economics and business in college and went on to get her MBA at Harvard in 2011.

Lake created Stitch Fix out of necessity. She wanted to work in the future of retail. Prior to enrolling at Harvard and founding Stitch Fix, she worked as a consultant in venture capital, advising Kohl's and other brick-and-mortar retailers. She realized no one had successfully merged fashion with data yet. They either didn't have or were unable to use data to understand what their customers wanted. She was also having a hard time finding clothing she loved, so she created Stitch Fix. In the early days, Lake collected data from her clients via SurveyMonkey to get a sense of their style. She then hand-picked outfits to send to her customers. She delivered the clothes to their homes and took a $20 check to cover the styling fee.

In 2012, she was introduced to Eric Colson, who was then Netflix's VP of data science and engineering. She wanted him to become an advisor to her company but he didn't see the value in her idea. However, the idea stuck with him. A few weeks later he called Lake up, met her for a glass of wine, and by the time he had finished his glass, he was hooked on how smart Lake was and how well developed her plan for her business was. It took Lake just a few months to convince him to join the company as chief algorithms officer. Lake successfully combined data science and marketing to grow Stitch Fix.

With Colson's experience in data science, the company was able to collect a crazy amount of data on its customers. Stitch Fix claimed to track body dimensions, pattern preferences, which clothes from their boxes they kept – and they could also compare it to what items of clothing other people who'd kept those same clothes also kept. With all of this info, Stitch Fix was able to deliver very accurate predictions. Then, a Stitch Fix stylist working from her home in, or wherever – she could be in Chicago or Charlotte, Denver or Dallas – could log in, see what the algorithm delivered for the customers she was styling and create the "Fix."

So here's the thing with Stitch Fix: it is not a fashion company. It is a technology company. The company's data tells them a lot but it doesn't, for instance, filter for things like "Busty, must have knit tops only." That's just one example but if your proportions are out of the norm, you're going to get things that don't fit. The algorithm there is the issue – a customer can see an item, say a jacket, a friend got from Stitch Fix and request it until they are blue in the face and never receive it if it isn't fed to their stylist via the algorithm.

Lake is one of the most intelligent founders in e-commerce. As the retail apocalypse claimed thousands of brick and mortar stores over the past years, Lake's company generated more than $1 billion in sales in 2018.  What's more, Stitch Fix is one of the few e-commerce companies that turn a profit. Stitch Fix has been turning a profit every year since 2015.  In 2015, the company brought in $21 million. In 2016, it brought in $33 million. In May 2017, the company raised $42 million from outside investors. In November 2017, Stitch Fix became the first female-led company to have its IPO in more than a year. The IPO valued Stitch Fix at $1.6 billion. The company raised $120 million in its IPO to fuel its growth.

In 2019, Stitch Fix had 8,000 employees. This included 5,100 stylists across the country and over 100 data scientists.  And then 2020 and COVID-19 happened. In early June 2020, Stitch Fix announced layoffs for 18% of its workforce or 1,400 employees. The laid-off employees were told they could remain with the company if they relocated. At the same time, the company announced it would hire about 2,000 stylists outside of California, citing the cost of living in that state as the reason for this. The company's warehouses closed and it had trouble fulfilling orders. However, Lake and her team quickly turned all of that around.

Stitch Fix reported a truly blowout quarter in December. The company had a 10% increase in revenue to $490 million. Stitch Fix now predicts the company is on track to have between 20% and 25% growth for 2021. Stitch Fix is unique in the apparel industry right now. Clothing stores have seen a 26% decline in sales last year. On the other hand, Stitch Fix quickly adapted to the athleisure trends that people are working from home in during the pandemic. The company's athleisure offerings have grown 150%. Its kids business launched in 2018 and is also thriving in the pandemic as it gives parents an easier way to buy clothing for their constantly growing kids. At the beginning of the 2020-21 school year, orders from first-time customers for the kids line were up 60% from the same period in the 2019-20 school year.

Lately, Stitch Fix is also seeing a big improvement in the number of satisfied and happy customers. Over the last two quarters, 80% of new customers kept at least one item from their "Fix" and ordered a second box. This is a five-year high for the company. Stitch Fix is well-positioned to build on the momentum the company has gained during the coronavirus pandemic.