It all started with a cup of coffee. In 1981, Howard Schultz walked into a small coffee shop called Starbucks in Seattle's Pike Place Market for the very first time. He was struck by a number of things, but most importantly, by how a cup of coffee could start a conversation and that conversation could start a community. At the time, there were four Starbucks locations in the world. Fast forward a few decades and Howard Schultz is the Executive Chairman of Starbucks and has grown the company to more than 28,000 locations in 77 countries. Now, Schultz is stepping down from Starbucks amid speculation that he's mounting a 2020 Presidential campaign.

Howard Schult was born in Brooklyn, New York in 1952. His family was very poor. Howard was raised in a New York City housing project. In order to distract himself from the poverty at home, Howard escaped through sports. He played high school baseball, football, and basketball. He went to Canarsie High School, graduating in 1971. In high school, Schultz was an exceptional athlete and was awarded a football scholarship to Northern Michigan University—his ticket out of his impoverished childhood. He was the first person in his family to go to college. Schultz received his bachelor's degree in Communications in 1975. 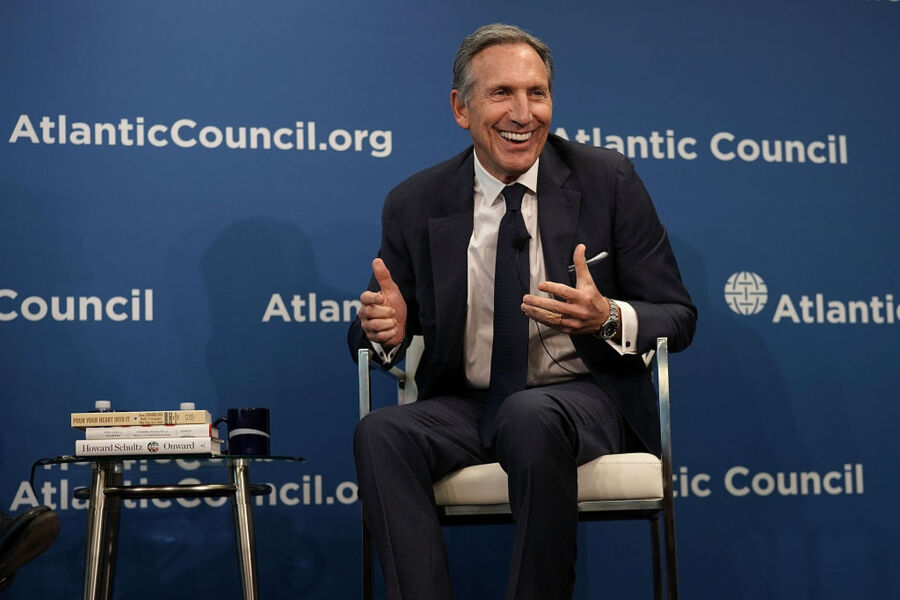 Four years after graduation, Schultz landed a job at Hammerplast, a Swedish manufacturer of drip coffeemakers. He eventually became manager of U.S. operations for Hammarplast. This is how he ended up in Pike Place Market Starbucks in 1981. Starbucks at the time was one of Hammarplast's best customers.

Schultz saw a massive opportunity and immediately knew he had to get a job at Starbucks. It took him a year to convince Starbucks to hire him. In 1982, Schultz left New York and moved to Seattle to become Starbucks' Director of Operations and Marketing. At the time, Starbucks had four stores and Schultz was 29 years old.

In 1983, Howard took a trip to Italy and was taken in by the romance of the Italian cafe culture. Howard thought he could bring that Italian coffeehouse tradition back to Seattle, turning a coffee bar into an important stop in a person's day. His instinct was clearly spot on. However, in order to make his dream a reality, he had to leave Starbucks, which at the time was solely a purveyor of coffee beans. The owners at the time did not envision turning Starbucks into a "restaurant".

Schultz started his own coffee company called Il Giornale. He would not be gone from Starbucks for long, however. He came back in 1987 to buy the company (with the help of local investors) for $3.8 million. That's roughly $7 million dollars after adjusting for inflation.

Under Howard's leadership, Starbucks expanded rapidly in the 1990s. The shops seemed to multiply like rabbits overnight, on every corner. Throughout this rapid growth, Schultz always said the goal of the company was simply "to serve a great cup of coffee". He also wanted "to build a company with a soul". This vision led to unprecedented advances in benefits for part time workers. Schultz insisted that all employees working at least 20 hours a week receive comprehensive health coverage. But he went even further – he also included unmarried spouses in that coverage. Then he introduced an employee stock-option plan. Schultz understood the importance of employee loyalty and a happy worker was a loyal worker. This lead to low employee turnover, despite the fairly low salaries of Starbucks' workforce.

For more than a year, there has been speculation that Schultz is preparing to put together a run for President of the United States in 2020. Schultz is a Democrat who has been a vocal critic of Donald Trump and his administration. In February, Schultz told CNN that he wouldn't run for president but when asked again recently by the New York Times, he replied:

"I intend to think about a range of options, and that could include public service. But I'm a long way from making any decisions about the future."

In October 2016, WikiLeaks posted emails hacked from Hillary Clinton's presidential campaign that revealed Schultz was amongst the people that were in the running to be Clinton's Vice Presidential running mate.

Howard Schultz has a net worth of $3 billion.