By Daniel Lipson on June 27, 2016 in Articles › Billionaire News

Nikesh Arora has left SoftBank Group Corp. after originally being the clear choice as heir to the Japanese company. The company's founder, Masayoshi Son (currently the richest man in Japan), made it clear that Arora would not be appointed to the top executive role anytime in the near future. Arora, 48, will instead stay on as an advisor, while Son, 58, will remain at the helm.

Son had originally named Arora as his successor, but decided he wants to control the business he built from a computer software developer into one of Japan's largest telecommunications and investment holding companies. Masayoshi Son lost $70 billion in the dotcom crash, but was able to rebuild his wealth, buy SoftBank from Vodafone, and acquire one of the top 3 U.S. networks, Sprint.

Son is a bit atypical for a businessman working in Japan. Originally born in Korea, Son received his degree in the San Francisco Bay Area from U.C. Berkeley, where he went to study computer science and economics. His first success came when he hired a scientist to help him build and patent a voice-operated multilingual translator, which he sold to Sharp for $450,000.

A few years later, he used $80,000 of his savings to create SoftBank. After some initial failure, he forced Joshin Denki to trade exclusively with SoftBank and let go of its existing suppliers. His tactic worked, and other deals swiftly followed. In a year, SoftBank's revenue went from $10,000 to $2.3 million. By 1984, they owned 50 percent of Japan's retail computer software market. By then, Son was exploring other business lines, and started investing in other technology companies.

Amidst the failures and successes, he found a small struggling company called Yahoo, which was asking for $5 million to develop its tech. Son offered $100 million, and owned more than one-third of the company when it went public in April of 1996. He repeated this tactic with Chinese e-commerce company, Alibaba Group Holding Ltd., investing a $20 million, one-third stake into a company that would grow to be worth $75 billion after going public in 2014. He also made friends with Steve Jobs and bought Vodafone Japan to get exclusive access to the iPhone in 2007, putting it in the hands of the public with cheap unlimited data plans. 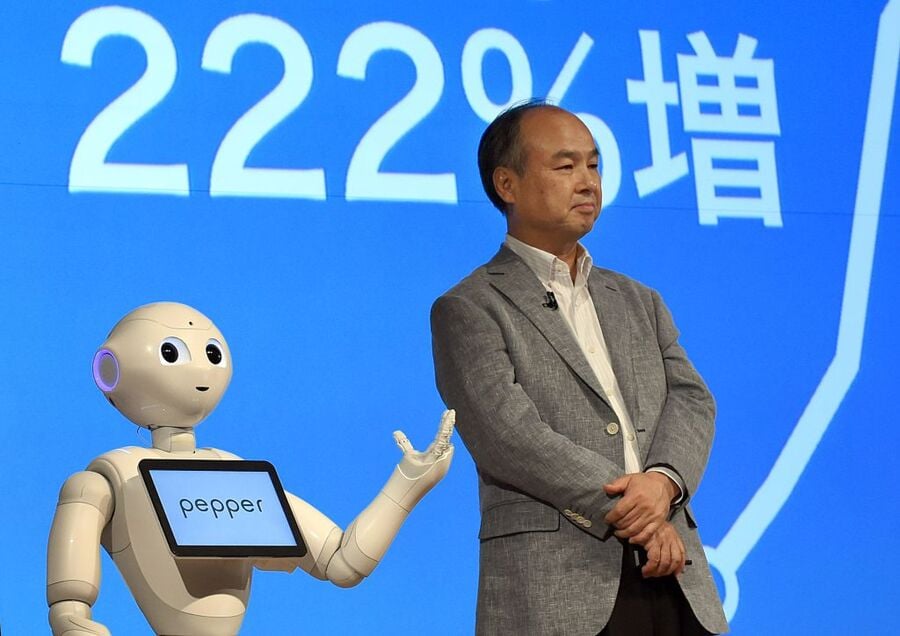 SoftBank's contribution to startups started to sag in recent years, as Son focused on his wireless and broadband business. Arora revived the venture push and gave it more ambition, with an aim to invest around $3 billion a year. Arora was hired in 2014, after a decade at Google, and was promoted to president last June. Last year, Arora made $76.7 million. He built his own investment arm within SoftBank, which takes stakes in technology companies around the world.

His goal was to find the next Alibaba Group. He spearheaded investments across many emerging services and websites, including a $1 billion fundraising round for U.S.-based online lender Social Finance Inc. and $1 billion into South Korean mobile commerce startup Coupang. Coupang reported an annual loss of $456 million in 2015, more than four times its 2014 loss. Some shareholders accused Arora of making poor deals.

This year, SoftBank's shares have been beaten back by its losses in telecommunications and heavy debt. Shares of SoftBank have fallen 2.9 percent, while Sprint Corp., controlled by SoftBank, jumped 7.8 percent. After purchasing Sprint for $22 billion in 2013, SoftBank has had a difficult time turning it around.

Arora helped lead a recent round of asset sales, and was credited for playing a key role in the deal to sell a majority stake in Clash of Clans developer Supercell Oy, valued at $10.2 million.

The board was called on to investigate whether he harbored conflicts of interest at SoftBank, due to his role as senior adviser to private equity firm Silver Lake, but found the claims to lack merit. Arora has sold $500 million in stock after stepping down, netting a small loss from the price he paid two years ago.