By Amy Lamare on February 15, 2020 in Articles › Billionaire News

Hot pot restaurants are a definite craze sweeping the world, and this has made Haidilao founder Zhang Yong the richest man in Singapore – and that's no easy feat. In Singapore, half of the population is in the world's richest 10%. First off, in case you're confused about what a hot pot is, it is a Chinese cooking method, prepared with a simmering pot of soup stock at the dining table, containing a variety of Asian ingredients. Hot pot originated a century ago as a cheap and easy meal for peasants squatting by the river to cook ox tripe and other offal but has since turned into a cultural phenomenon.

Also, it's pretty hard to become a billionaire as a chef or restauranteur, but that's exactly what Zhang has accomplished. Zhang's Haidilao chain of hot pot restaurants have taken over the world. At the end of 2018, Haidilao Hot Pot had 466 restaurants in more than a hundred cities, including Los Angeles.

Zhang, 49, was born into poverty in rural Jianyan, Sichuan, China in 1970. Today, Zhang has a net worth of $13.9 billion and his hot pot empire has restaurants in the U.S., U.K., Canada, South Korea, Japan, Australia, Singapore, and Malaysia. 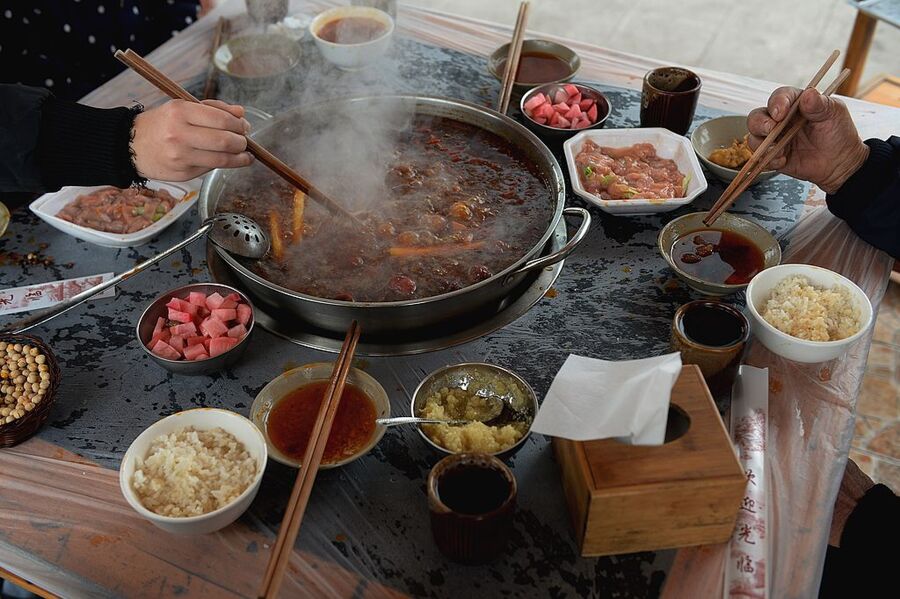 As a teen, Zhang educated himself by reading books from his local library. He turned to reading to escape his social awkwardness. He was unsure of himself and tongue-tied around girls. By reading books that were from authors outside of China, Zhang realized he was "ignorant and dull." He dropped out of high school and graduated from a vocational school. He worked at a local tractor factory for six years. When he was 19, he decided to get a meal in a local restaurant instead of the factory's cafeteria. This was his first meal in a restaurant and it was a hot pot restaurant. Zhang thought the staff was rude and the food was sub-par. He left that meal believing in the value of customer service.

In 1994, he quit his job as a welder in a tractor factory that paid him $14 per month after getting into an argument with his supervisor after he was denied a company apartment he wanted to share with his then-fiancée Shu Ping. He borrowed $1,500 from Shu and friends Shi Yonghong and Li Haiyan to open a tiny hot pot restaurant with four tables. He promised his fiancée and friends that their investment in him would grow to $21,500 within five years and if it didn't, he would pay them back.

Zhang drew customers to his restaurant by offering good discounts and free snacks. He didn't know how to cook hot pot all that well, so he focused on excellent customer service instead. Within months of opening, Haidilao was the biggest hot pot restaurant in Jianyang. His second location opened and thrived. Haidilao Hot Pot is known for its spicy dishes and its customer service.

In 1998, a friend suggested partnering to open a third Haidilao in Xi'an. Within six months that restaurant failed and Zhang attributed the failure to the fact that he wasn't running the restaurant. Since then, he has never partnered with anyone else.

Zhang's motivation to start his hot pot empire was simply to escape the poverty of his young life. He had a friend when he was young who was murdered by his own mother after his father left the family. She couldn't make ends meet. After she killed her son, she committed suicide. Zhang has said: "Haidilao's mission, vision, and values are one and the same: change your life with your own hands." In Mandarin, the world haidilao means "scooping for treasure at the bottom of the sea."

Haidilao's reputation for incredible customer service fueled its success. The restaurant offered free manicures, leather shoe cleaning services, massage chairs for waiting customers. Guests are entertained by performances or having chefs come to their table to prepare food. Haidilao opens a new restaurant every three days. Each restaurant takes just one to three months to break even. The growth of his hot pot chain is a testament to the curiosity in Chinese food and culture by foreigners.

Haidilao's employees are also a pretty happy group. Haidilao's employees in China are mostly young people from rural towns with little education. They are the kind of young people that Zhang himself was. The company promotes internally and pays staff fairly. Employees make salaries that are much higher than the industry average. The company's CEO started out as a waitress.

The $1,500 loan to Zhang turned out to be a great investment that has turned all three of Zhang's friends, who scraped their money together to invest in his dream, into billionaires. Zhang's net worth skyrocketed when Haidilao went public on the Hong Kong stock exchange in September 2018. Not long after, he moved to Singapore and became a naturalized citizen with a Singaporean passport. The company raised $963 million from the IPO. Haidilao had $17 billion in sales last year

After Zhang's move to Singapore, his incredible net worth of over $13 billion helped him take the title of richest in Singapore from real estate tycoons Robert and Phillip Ng.  The Ngs have a net worth of $10.1 billion.