Peter Thiel, 48, co-founded PayPal, was Facebook's first outside investor, and is worth $2.2 billion. He made early investments in Spotify, Airbnb, SpaceX, Lyft, and half a dozen or so other companies that each are valued at more than $1 billion. He is the ringleader of the PayPal Mafia. the enormously successful group of former employees and co-founders that includes SpaceX's Elon Musk and LinkedIn's Reid Hoffman. Thiel is one of the most influential and admired figures in Silicon Valley. He's also known for his eccentric, iconoclastic politics. He's long identified as a Libertarian. Thiel is also gay and a proponent of the legalization of marijuana. That's why much of Silicon Valley was left scratching their heads before, during, and after Thiel's prime time speech at the Republican National Convention.

On Thursday night, after days of the rag tag group of people the RNC dredged up (which included Chachi from Happy Days, a guy best known for being the hot guy in a Janet Jackson video, and the dude who promotes the UFC), Thiel took the stage to address the Republican National Convention. Many who know Thiel suspect he did it just to be contrary. They say he delights in things like that. In fact, Thiel celebrates his contrarian thinking. He asks job candidates who interview with him to name one true thing that the world disagrees with them on. 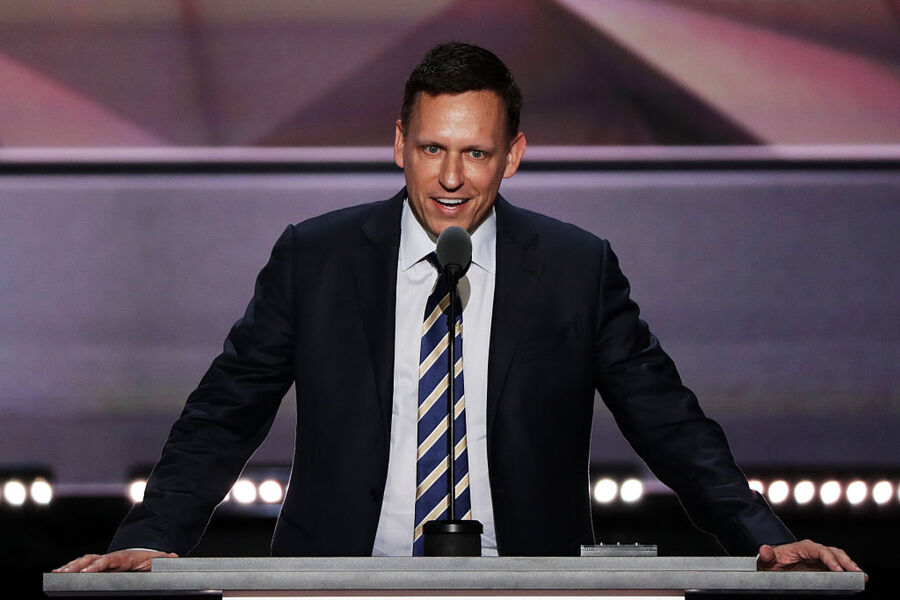 Thiel was born in 1967 in Germany. He moved to the U.S. when he was one-year-old. He was both quirky and a genius from a young age. He was a chess prodigy – at one time ranking seventh in the under 13 age group of the U.S. Chess Federation. He loved both Ayn Rand and J.R.R. Tolkien. He spent seven years at Stanford getting his bachelor's and J.D. He founded the Stanford Review, a right wing student newspaper.

After law school, Thiel had an appeals court clerkship and a job at a New York City law firm. He quit the firm after seven months and three days and then spent three years at Credit Suisse as a derivatives trader before moving to California to found PayPal.

Thiel's original vision for PayPal was, in his words: "centered on the creation of a new world currency, free from all government control and dilution – the end of monetary sovereignty, as it were." That's not what happened. PayPal immediately struck deals with credit card companies and banks. Four years after founding it sold to eBay for $1.5 billion. In 2015, eBay spun off PayPal and it is now worth nearly $50 billion.

Over the years, Thiel has evolved into a shrewd, calculating man with a grudge. He spent millions to destroy the subject of that grudge – Gawker Media. In 2007, Valleywag, Gawker's tech gossip site, revealed that Thiel was gay. He had come out to his friends, but was not out publicly yet. Nine years later, Thiel revealed that he'd been funding a number of lawsuits against Gawker, including Hulk Hogan's sex tape trial. That trial resulted in a $140 million judgment in Hogan's favor. Gawker filed for bankruptcy in June 2016.

Thiel is the co-founder of the data mining company Palantir. The company gets funding from the CIA. Palantir's software has been used by police to search databases for patterns and clues. The company is not yet profitable.

That brings us to the point that Silicon Valley's biggest customer by far is the government. Silicon Valley is also known as the Valley of the Democrats. In the 2012 presidential election, 83% of tech firm employee donations went to Obama. In fact, when the Daily Beast polled Silicon Valley tech executives in 2015, they could not find a single person who identified as a supporter of Donald Trump's candidacy.

So you can see why Silicon Valley was left shaking its collective head when Peter Thiel gave one of the final three speeches before Donald Trump accepted the Republican nomination for president.

Thiel started off by saying: "I build companies and I'm supporting people who are building new things, from social networks to rocket ships. I'm not a politician. But neither is Donald Trump. He is a builder, and it's time to rebuild America." He went on to deride Silicon Valley as a rigged system. He went after Hillary Clinton's speaking fees. He also said:

Thiel described Trump as he would a venture capitalist. He called him a disruptive change agent who would challenge the "ossified monoculture of liberal upper-class privileged ethnic groups."

Silicon Valley was left speechless. One of their own seemed to be tearing into the very fabric of prosperity they'd built. And more than one person has been left wondering just what's in this for Thiel.

Thiel's politics have always been more Libertarian than Republican. He once cofounded a nonprofit that wanted to develop floating cities where there would be few, if any laws.

What it may come down to is that Thiel likes it when people are talking about him and wondering what he's up to. And, he does have a well-established reputation for going against conventional wisdom and supporting some of the fringiest ideas.