By Amy Lamare on December 31, 2019 in Articles › Billionaire News

Julia Flesher Koch is the ninth-richest person in the world and the second-richest woman in the world. Who? Yeah, she wasn't on our radar either, until recently. She is the widow of Koch Industries' David Koch, who passed away in August at 79. She inherited $41 billion from her late husband. Julia, along with the three children she shares with David, inherited a 42% stake in Koch Industries when he died. All three Koch children are younger than 25.

Julia Flesher grew up in the Iowa town of Indianola, which is close to Des Moines. Her family owned a farm and a furniture store in town. They moved to Arkansas sometime during her childhood and opened a high-end women's clothing store. Julia attended the University of Central Arkansas. She fell in love with New York City when she went there with her mom on a business trip, in 1980 when she was 17. After college, Julia moved to Manhattan and began working in the fashion industry as an assistant to the designer Adolfo. During her years working for Adolfo, she styled Nancy Reagan and a number of prominent socialites of the era. 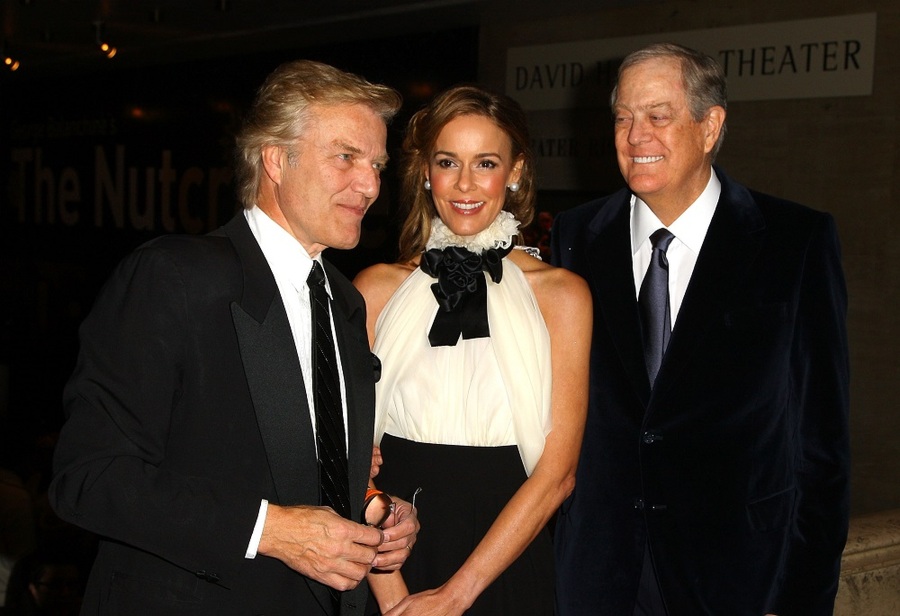 Julia Flesher and David Koch met in January 1991 on a blind date. He took her to Le Club and they didn't hit it off at all. About that first meeting, Julia said:

"Afterward, we shook hands and I said, 'I'm glad I met that man because now I know I never want to go out with him."

They ran into each other six months later at a party. David acted like he was meeting her for the first time. Julia reminded him they'd gone out once before. He made it up to her by taking her on a date to the U.S. Open. That was the beginning of a five-year courtship that wasn't without its bumps in the road.

At the time, David Koch was a lifelong bachelor known for throwing parties that drew the type of women that men bring home to mother as guests. This was embarrassing for Julia, but she apparently had her eye on the prize. Julia stopped working in 1993, three years before she married David Koch. She chose to dedicate herself to managing the various homes her future husband owned at the time. In 1995, David had surgery for prostate cancer and Julia gave him an ultimatum. They'd been dating for four-and-a-half years, and she told him he could either be a live husband or a dead bachelor. Julia and David married in 1996, at his home in Southampton, Long Island, New York.

In a 1998 interview with The New York Times, Julia said of the Cinderella-esque tale of a young fashion assistant meeting a billionaire "I thank God every day." She went on to talk about her life in the 1980s when she made $200-a-week working as an Adolfo assistant. Back in those days, she worried about making the rent and finding taxis in the rain. "Those were the hard days," she said. Now, "it's so refreshing to be in the role of the wife." One of her roles as David Koch's wife, besides maintaining their residences in Manhattan (Jackie Onassis' former apartment, natch), Southampton, Aspen, and West Palm Beach, she was expected to pour her husband's glass of orange juice each morning.

Julia was embraced by New York society and much admired for marrying one of the richest men in the country. She is an active philanthropist who has given money to the Lincoln Centre, the Metropolitan Museum of Art, and the Smithsonian Museum of Natural History. It is Julia, in fact, who is largely credited with instilling a love of art in her husband. She also was a factor in the fact that he was more socially prominent than his brothers.