By Amy Lamare on September 27, 2015 in Articles › Billionaire News

The eldest son of Dubai's Sheik Mohammed bin Rashid Al Maktoum was a handsome, athletic playboy with a bright future ahead. However, the 33-year-old Sheikh Rashid Bin Mohammed never got to realize the promise that his royalty all but guaranteed him. On September 19th, Sheikh Rashid died in his home. His death shocked his nation and left many unanswered questions. Rumors of how and why such a young man ended up dead quickly took hold. The official cause of death is a heart attack, however, whispers of drug and steroid abuse have long clung to the late Sheikh. 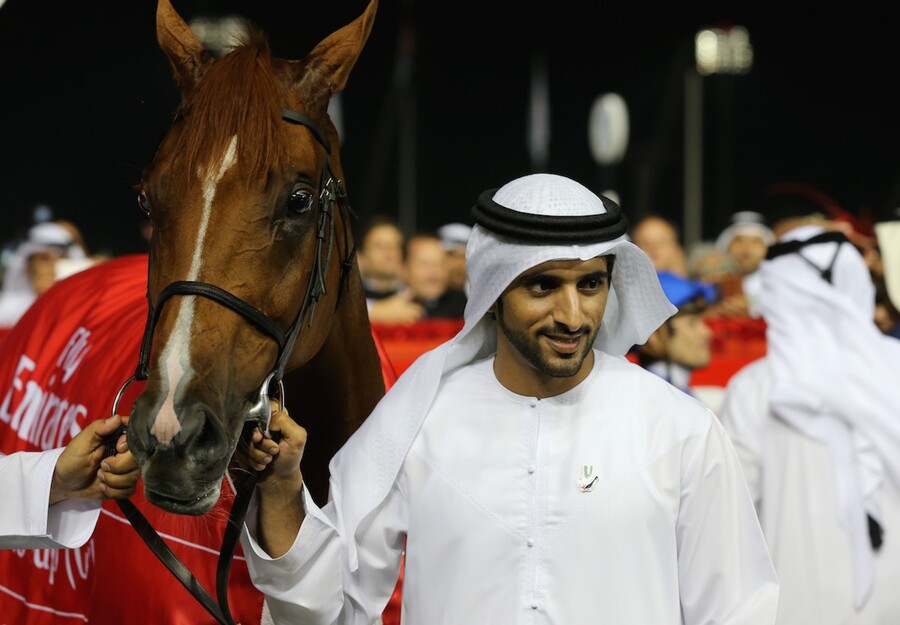 Sheikh Rashid was born in November 1981. His father, Sheik Mohammed bin Rashid Al Maktoum, is largely credited with turning Dubai from a dusty desert outpost into a lavish modern city. By parlaying a small bit of oil into tourist dollars, Sheikh Mohammed made Dubai into one of the top tourist destinations in the Middle East. Rashid, as his eldest son, was next in line to his Emirate. Rashid was given a great education, attending the Rashid School for Boys in Nad Al Shaba and the UK's Sandhurst – a top training academy for British military officers. He graduated in 2002 and returned to Dubai to take on a number of prominent public roles. He opened several of his own companies, including the investment group, United Holdings Group Dubai. Rashid was also a passionate horseman who set up his own racing stable, known as Zabeel Racing International.

Rashid's net worth clocked in at $1.9 billion, so he had no problem spending the cash to invest in horses that were winners. Rashid was also into endurance racing – the equestrian equivalent of a marathon – and became a national hero in 2006 when he won two gold medals at the Asian Games.

Then, less than a year later, the princely sheen of Sheikh Rashid's life began to crumble. He started to withdraw from public life. In 2008, he was stripped of the title of crown prince. His brother, 31-year-old Sheikh Maktoum bin Mohammed Al Maktoum was given the title. The official reason for this was never given. Many assumed Rashid's brother was just better suited for the job. But the rumor mills were churning with possible reasons for the switch.

The upper echelons of Emirati society, as well as the diplomatic community, had a clear idea of how and why Sheikh Rashid fell from grace. Then Acting Consul General for the CIA, David Williams, wrote a confidential memo in 2008. This memo was one of the thousands exposed by Wikileaks and it gives a fascinating look at what went on behind the scenes with Sheik Mohammed bin Rashid Al Maktoum and his sons at Zabeel Palace. The memo alleged that Sheikh Rashid killed an assistant in his father's office. This act caused Rashid to forfeit his opportunity to be heir to the throne. It is thought that the attack happened due to 'roid rage. Rashid was said to be taking steroids at the time.

More allegations surfaced in a memo written by Consul General Martin Quinn that told of an underground royal party scene well known for drugs and sex parties. He claimed that this scene was available only to the very wealthy and cocaine use was common at these parties. The guest list was largely aristocratic and royal and often included Sheikh Rashid.

In 2011, Sheikh Rashid resigned his presidency of the UAE Olympic Committee. He gave his heavy workload as the reason. However, a British aide who worked for the family alleged that Rashid did not have a heavy workload. Rather, it was his serious drug addiction that was the reason for his resignation. In fact, the aide claimed that Rashid's family was furious with their eldest son and forced him into rehab in 2009.

Adding further controversy to the young Sheikh's death is the theory circulating that Rashid was in Yemen at the time of his death.  Footage has been released that places Rashid in Yemen's Marib province around the time of a Houthi missile attack that resulted in the death of 45 UAE soldiers, which raises the possibility that he may also have been killed in that missile strike, as opposed to having died from a heart attack. Yemeni sources claim that he was killed in Yemen as he was part of a special ops unit deployed to fight in Yemen's civil war.

Officially, the Sheikh wad found dead in his home. Though the Emirate claims a heart attack claimed the 33-year-old's life, that is definitely not the whole story. It is all but certain the famously secretive Zabeel Palace will never disclose what really happened to Sheikh Rashid.

Sheikh Rashid was buried at the Umm Hurair Cemetery in Dubai. An official three-day mourning period has been declared. Rashid's brothers carried his body during the funeral.