By Amy Lamare on February 25, 2017 in Articles › Billionaire News

It looks like Samsung has bigger problems than exploding phones. Lee Jae-yong is the 48-year-old vice chairman of Samsung Electronics and the only heir to the company. On Friday, February 17, a South Korean court arrested and jailed the billionaire son of Samsung chair Lee Kun-hee. The arrest comes as a shock in a country that has a history of leniency towards wealthy and powerful people who commit white collar crimes. Samsung Electronics dominates the South Korean economy. Lee Jae-yong has a net worth of $6 billion.

Lee was groomed for much of his life to succeed his father at Samsung. He is accused of handing out $36 million in bribes to President Park Geun-hye and her friend Choi Soon-sil in exchange for government favors for Samsung. Lee, who was questioned for more than 22 hours on suspicion of illegal activity in January, is also being investigated for embezzlement of Samsung funds. It is believed that he is hiding company assets overseas and that he lied under oath when questioned about this. 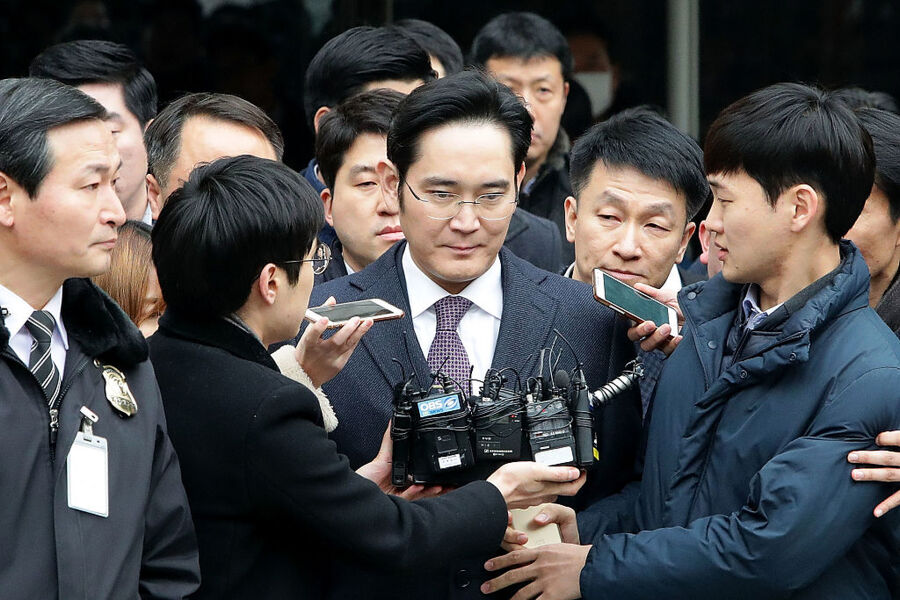 Samsung has denied that it bribed the president and her friend. The company also denies seeking favors from the president.

The special prosecution team has less than two weeks to investigate the Samsung heir. Under South Korean law, Lee can only be held for 20 days without solid charges brought against him. A conviction in this case will also help the courts bring charges against South Korea's president Park Geun-hye. Parliament suspended the powers of the president in December. A decision on whether she will be removed from the presidency or not is pending.

It is suspected that Samsung was able to get government support of a controversial 2015 merger of two of Samsung's divisions that was a part of the process of transferring the leadership of the company from father to son. Many shareholders opposed the merger, citing that it would hurt their dividends while benefitting Lee and the other members of Samsung's founding family.  Samsung was ultimately able to get approval from the shareholders due to its key investor, the National Pension Fund. Last month, the current head of the pension fund was indicted for his role in convincing the fund to support the merger.

Also under investigation is whether the value of Samsung Biologics was overpriced when it went public last year. Prosecutors suspect it was overvalued to benefit Samsung's founding family. The prosecutor's office is also looking into whether or not Samsung got any favors from the fair-trade commission in regards to the company's complex cross shareholding structure which allows the Lee family to control the enormous conglomerate while only holding a minority stake.

This isn't the first time special prosecutors have looked into the Lee family and Samsung. Lee's father has been convicted in the past of tax evasion and embezzlement but he never spent a day in jail. He was last convicted in 2008 and pardoned a year later by the president.