Robinhood Co-Founders Are No Longer Billionaires After 80% Stock Drop

As many of their customers have learned in the last year, one minute the stock market gives you a fortune… and the very next she takes it away.

Baiju Bhatt and Vladimir "Vlad" Tenev are the co-ounders of Robinhood Markets, Inc., the stock/crypto trading platform. The duo founded Robinhood in 2015. The app found an enormous user-base after introducing zero commission stock trading, upending the likes of E*Trade which historically charged between $7 and $10 per stock transaction.

By 2018 Robinhood had 3 million users. This additional growth was largely fueled by an ingenious referral program whereby current users were given free stock shares in exchange for bringing in new users.

In July 2021 Robinhood went public. It ended its first day as a public company with a $30 billion market cap. A month later the company's market cap hit $46 billion.

Vlad Tenev and Baiju each own 8% of Robinhood's outstanding shares. When the company was worth $46 billion, on paper they were each officially worth… 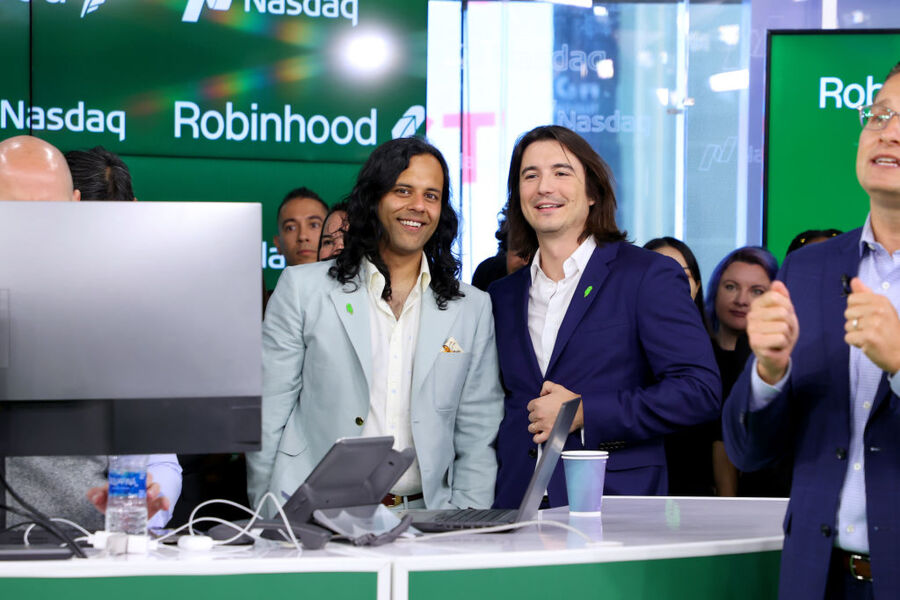 Unfortunately, $46 billion would prove to be (for now) the company's all-time high valuation. When the company was worth $46 billion, Robinhood's price per share was $55.

When the markets closed on Tuesday afternoon, Robinhood's share price was $9.27.

That's an 83% drop from its all-time high in August of last year. The stock is down 73% in just the last six months alone. Robinhood's current market cap is around $8 billion. That's less than several of its last private funding round valuations.

At an $8 billion market cap, Vlad and Baiju's 8% stakes are currently worth around…

Still an impressive amount of money, but it's never fun to lose billionaire status.