Robert F. Smith – The Richest Black Person In America – Just Did Something Incredible During His Morehouse Commencement Speech

Robert F. Smith may not be as well-known as his fellow American black billionaires Oprah Winfrey ($3.5 billion) and Michael Jordan ($1.7 billion), but that might be changing soon! For those who don't know, Robert F. Smith is a financier who has a net worth of $5 billion thanks to his private equity firm Vista Equity Partners. For many years he trailed Oprah as the richest black person in America. By March 2018 his $4.5 billion finally overtook Oprah's $3.3 billion, giving him the crown of richest black person in America. As of this writing, Robert's $5 billion makes him the second-richest black person in the world behind Nigerian oil magnate Aliko Dangote ($10 billion). Earlier today Robert F. Smith was delivering the commencement speech for Morehouse College in Atlanta. During his speech he did something that stunned the graduating class and likely changed the commencement speech game forever.

Step 1: Say hello to the graduating class, parents, friends and faculty. Make a reference to the weather.

Step 2: Tell inspirational story of how you went from sitting in a seat just like they are now… to being incredibly successful. Try to keep this portion under 20 minutes.

Step 3: End your speech with rousing parting advice on how the class of [insert year] can do the same and how it's up to them to change the world since they are the future.

It's very important to end with a variation of "Now let's go party!"

That's how commencement speeches have been given for a hundred years without variation. It didn't matter if you were Steve Jobs or Adam Sandler, that three-step system was the standard formula… until today!

Step 4: "I just paid off all of your student loans."

Drop mic. Walk off the stage to thunderous applause.

Seriously. He just did this.

During his Morehouse College commencement speech Robert announced that he was paying off every single penny of student loan debt carried by the class of 2019. According to one estimate, this equates to a $40 million gift to the students. Robert previously donated $1.5 million to the school.

Check out the video:

Robert challenges the class of 2019 to pay this forward for future classes when they become successful. He also encourages current successful graduates to find a way to make this the standard for all graduating classes from now on. A tall order that I hope is fulfilled, otherwise the class of 2020 is gonna be pisssssseed. Imagine if their speaker is some NASA scientist. What's he gonna do? Name a star after them? GTFO.

Robert's announcement absolutely stunned the audience. I mean, just check out this guys face when the news hits him: 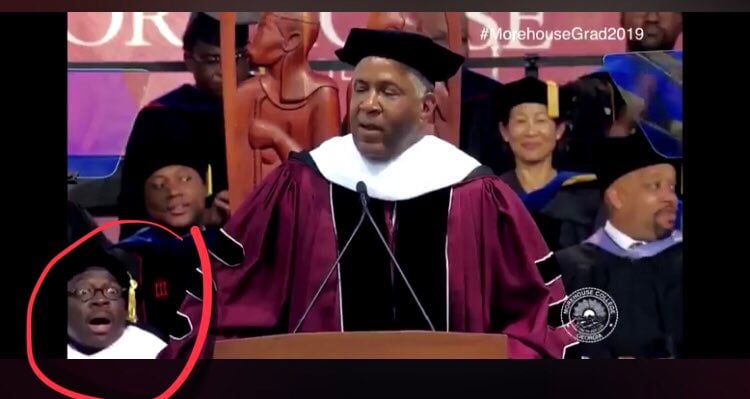 Good for Robert F. Smith! What an amazing act of generosity. Hope this becomes the new norm.