The Rise And Fall Of Travis Kalanick

By Amy Lamare on July 1, 2017 in Articles › Billionaire News

This week the wild ride that Travis Kalanick's tenure at Uber had become, came to an end. After numerous scandals, the board of directors had enough and asked for his resignation. This marks the end of this chapter of Kalanick's high flying career. Never one to take the safe road, Kalanick's brand of brash leadership created a workplace culture that quickly turned a scrappy startup called UberCab into a global $69 billion juggernaut and spawned a slew of copycat companies.

Uber has been relentlessly conquering the world ever since its launch. The company is aiming for world dominance while its competitors struggle to add more U.S. cities to their services. Lyft, Uber's closest competitor, operates only in the U.S. On the other hand, Uber operates in 570 cities worldwide. That's pretty convenient. You can use the same Uber account to get a ride in Seattle, Sydney, or Sao Paulo. 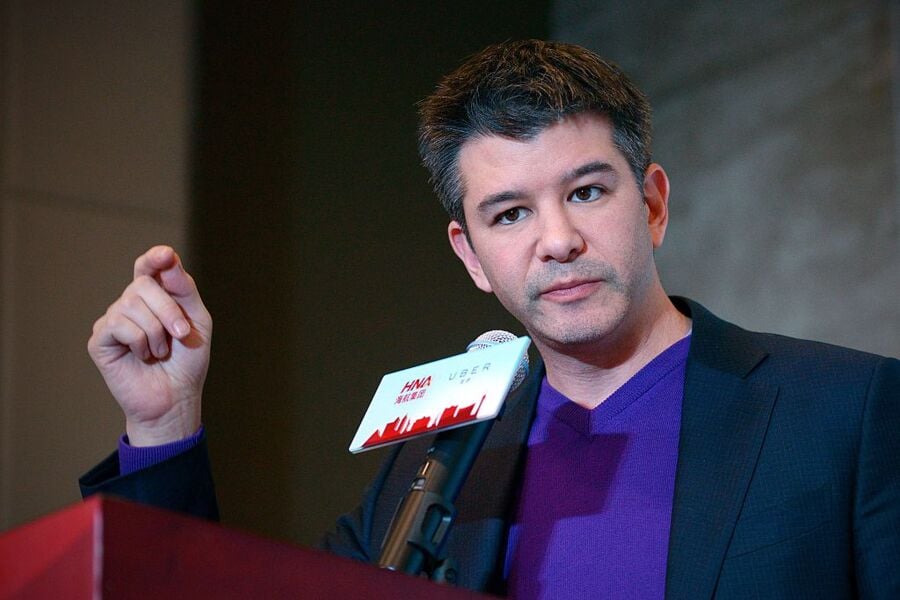 Friends of Kalanick describe him as reckless and at times arrogant. His personality and drive are big reasons why Uber has been so successful. Kalanick simply does not give up – even when things are spinning wildly out of control as they were at Scour, Red Swoosh and Uber – all companies Kalanick had a hand in founding. Kalanick had a pretty rapid rise to the top of the tech world and an equally stunning fall from grace.

Kalanick was born in Los Angeles in 1976. He grew up in the suburb of Northridge and wanted to be a spy when he grew up. As a teenager, he worked as a door-to-door salesman for Cutco knives. He started his first business, an SAT prep course called New Way Academy, when he was 18. He graduated from Granada Hills High School and enrolled at UCLA to study computer engineering.

Kalanick had caught the entrepreneurial bug. He took the engineers from Scour and founded Red Swoosh, another peer-to-peer file sharing company. However, Kalanick clashed with his co-founder, Michael Todd. Red Swoosh also encountered issues when it failed to withhold taxes from its employees' paychecks. The stock market crash post 9/11  economy also threatened to do the company in. All of this seemed to spell impending doom for Red Swoosh. However, Kalanick and the company held on and in 2007, Akamai Technologies bought Red Swoosh for $19 million.

Uber launched in San Francisco in June 2010. It was a huge hit with customers, but investors were not exactly beating down Uber's doors to invest in the fledgling startup. In late summer 2010, Uber raised a $1.25 million seed round from First Round Capital, investor Chris Sacca, and Napster co-founder Shawn Fanning.

Uber began expanding to other U.S. cities rapidly. The company launched in New York City in May 2011 and is now one of Uber's biggest markets. In December 2011, Uber went international when the company launched in Paris, France. Early investors in Uber included Jay-Z and Jeff Bezos. Uber raised $40 million in 2011.

In 2012, Uber introduced its low-cost Uber-X product worldwide. Uber X offers rides 35% cheaper than the original Uber Black service and drivers pick Uber customers up in cars like a Prius, Jetta, or Sonata.

In 2013, Uber had a valuation of $3.4 billion and was becoming a disruptor in the transportation industry worldwide. There was general optimism about Uber's ability to grow and expand rapidly in cities thousands of miles away from the company's San Francisco headquarters.

But in 2013, the lawsuits started. Several cities resorted to legal action to shut down the ride sharing company. Taxi drivers were threatened by the very existence of Uber. At that time, Kalanick said that Uber was spending $1 million a year on legal fees, had three attorneys on staff, and roughly 50 different law firms around the world working on Uber's business.

By 2014, Uber was valued at $18 billion after raising more than $1 billion during a funding round. Later that year, the company went through a second round of funding that upped the valuation of Uber to $40 billion. Kalanick was officially a billionaire. Uber was in more than 100 cities. However, scandals and lawsuits began to surface over the company's aggressive business practices and rider safety. A woman in Illinois filed a lawsuit claiming an Uber driver touched her inappropriately. After an Uber driver in New Delhi, India raped one of his passengers; the company was banned from operating in that city.

In 2015, Uber became the world's most valuable startup with a $51 billion valuation. Analysts began to wonder when the company would go public, but Kalanick resisted this push. In the meantime, there were mounting scandals over how Uber considered drivers contractors and not employees, allowing them to avoid offering health insurance, paid time off, and other benefits. That battle ran into 2016 and Uber settled two lawsuits brought by drivers in California and Massachusetts who wanted to be considered employees.

And then, in 2017, the proverbial poop hit the fan for Kalanick and Uber. First, he was lambasted by the public for joining Donald Trump's team of advisers. He dropped out of that committee a few weeks later. Then, a video surfaced of Kalanick viciously berating an Uber driver while he was a passenger in the car. The driver was frustrated over how the company pays its drivers. Kalanick unleashed on his driver saying, among other things:

"Some people don't want to take responsibility for their shit."

At the time, Kalanick's outburst seemed to be the lowest point he and Uber could sink to. And then, a former Uber engineer named Susan Fowler published an impassioned blog post in which she accused the company over overt sexism. She was propositioned by her boss time and time again. She took it to H.R. and they told her that her boss was too important to discipline. #DeleteUber became a trending topic on social media. Uber hired former U.S. Attorney General Eric Holder to investigate the growing number of allegations of sexual harassment.

Still, Kalanick remained his hard charging self and the bro like atmosphere at the company remained.

In early June, Emil Michael left Uber. Michael was Kalanick's right hand man. But he got caught up in his own scandal. In 2014, Michael, Kalanick, and other employees visited an escort bar in South Korea. Michael was also accused of viewing the medical records of the woman in New Delhi who had been raped by an Uber driver. The woman sued Uber for a second time after finding out that Michael and a number of other executives had looked at her medical records

At the same time, Holder, whom Uber had hired to help them, issued a report on the company's management culture that was damning. Holder spent months studying the culture and ultimately issued a 13-page document with 47 recommendations that pretty much confirmed what people already suspected about the culture within Uber. Among other things, Holder found that the company's values were deeply flawed. Mottos like Always Be Hustlin', Meritocracy, Toe-Stepping and Principled Confrontation "justify poor behavior," according to Holder's report. Holder also said that Uber's human resources department was disorganized and lacked support from senior management, making them unable to truly support the employees that came to them. The report also called out Uber's unequal benefits, the frat culture, sexism, bullying, and the unchecked power of executives.

It was clear to everyone that big things needed to change at Uber. The question was, could Kalanick, who had in the past run afoul of ethics and the law at his prior companies, lead the campaign to make Uber a better place to work for everyone – men, women, parents, minorities, disabled people, etc.? Ultimately, the board decided no, Kalanick was not the CEO that Uber needed right now.

Earlier this week, Kalanick met with members of Uber's board of directors who, under pressure from investors, asked Kalanick to submit his resignation.

At the moment Uber is without a CEO, CFO, Head of Engineering, and General Counsel. Travis Kalanick retains his seat on Uber's board of directors.

Uber is the most valuable privately held tech company in the world.