By Amy Lamare on October 3, 2019 in Articles › Billionaire News

Bill Bidwill, the longtime owner of the NFL's Arizona (and before that Chicago and St. Louis) Cardinals passed away Wednesday, October 2nd, surrounded by his family and loved ones, according to a statement from the team. He was 88. His son, Michael, is the president of the Cardinals and he released a statement saying:

"We are overwhelmed by the support our family has received, not only now but throughout the latest chapter of his life. We are especially grateful to the nurses, doctors and other caregivers whose endless kindness and compassion in recent years have made our dad's life so meaningful. Above all else, we will remember him as a man devoted to the three central pillars of his life — his immense faith, his love for his family and his life-long passion for the Cardinals and the sport of football."

Bill Bidwill's dad Charles bought the Chicago Cardinals in 1932. Charles Bidwill was an attorney in Chicago who allegedly was connected to Al Capone. Bill was part of the legacy of the team and its organization for eight decades. He was a ball boy when he was young, and joined the staff of the Cardinals organization full time in 1960 after he got out of the Navy. That was the team's first season in St. Louis. He became the owner of the St. Louis Cardinals in 1972. He moved the team to Phoenix, Arizona in 1988 when demands for a new stadium were not met. (Related: St. Louis, that's two NFL teams you've lost.) 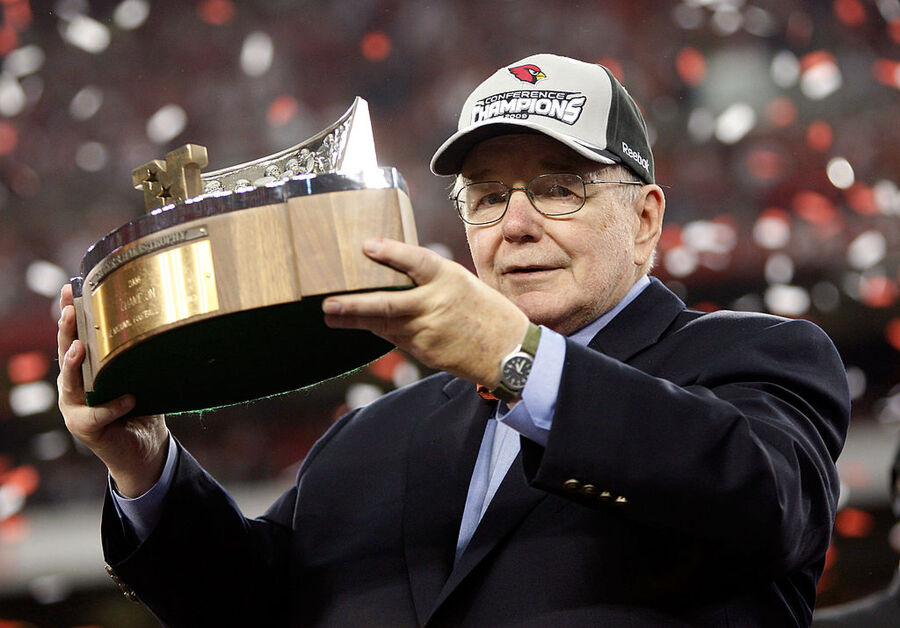 Bidwill ceded his responsibilities for the day-to-day operations of the family football franchise to his son Michael in 2007. Bidwill oversaw a team that was mediocre at best. From 1972 to 2007, when Ken Whisenhunt was hired as coach and Michael took over the team, the Cardinals had just five winning seasons. In the 2008-09 season, the Cardinals went to their first and as yet only Super Bowl. The Cardinals lost to the Pittsburgh Steelers 27-23.

"I met Mr. Bidwill when I was only 21 years old, straight out of the University of Michigan. I grew up playing for the Bidwill family and for Bill. He was not what anyone would call an absentee owner. He was there every day, he was at the practices, he was just a constant. It's a sad day."

Dierdog went to six Pro Bowls during his 13-year career in the NFL and with the Cardinals.

Hall of Fame defensive back Aeneas Williams played for 10 seasons with the Cardinals. He said:

"Obviously when we talk about the game of football, there's a scoreboard and there's wins and losses on the field. But the thing that I've always understood and heard even when the team was back in St. Louis, it was the philanthropic work that Mr. B would do. And he would do it in such a way where there was no fanfare and no calling attention to it."

Wide receiver Larry Fitzgerald has been with the Cardinals since 2004. He said:

"Now you hear everybody talking about diversity and minority hires. Back when he first started doing it, that was not the norm. Obviously, I was a part of it with Rod Graves and Dennis Green when he hired the first general manager and head coach to work together at the same time — that was groundbreaking. Definitely before his time, and he was a forward-thinking person. He didn't care about the color of your skin or race or the gender; if he felt like you could do the job to the best of your ability to help us become better, then you were the right person for it. I think you're starting to see that more often now, and he was doing it a long time ago."

The Bidwill family and Cardinals organization founded the Bill Bidwill Fellowship in 2015. It's mission is to promote and increase diversity on the team's coaching staff.

NFL commissioner Roger Goodell issued a statement about Bidwill's death. "Bill Bidwill was part of the NFL family his entire life, starting from his days as a ball boy through his time as an owner. Although never one to seek the spotlight, Bill had an incredible sense of humor and he made extraordinary contributions to the NFL. Bill's vision brought the Cardinals, the NFL and multiple Super Bowls to Arizona. He was a leader in embracing diversity and employed the first African American female executive, and the first African American general manager and head coach tandem. We extend our condolences to Bill's family and the Cardinals organization, which along with his faith, meant so much to him."

Bill was married to his wife Nancy for 56 years. She passed away in 2016. He is survived by five children, Nicole, Bill Jr., Patrick, Tim, and Michael as well as his 10 grandchildren and one great-grandchild.