Isabel dos Santos, is the billionaire daughter of the former president of Angola, Jose Eduardo dos Santos. She has a $2 billion fortune that was 100% gained through her father handing her lucrative companies to run and contracts to execute. She has reaped the financial benefits of being the daughter of a politician while her fellow Angolans wallow in abject poverty. Isabel dos Santos is one of the most public examples of egregious nepotism, kleptocracy, and plundering walking the planet today. Back in December, the country of Portugal froze her assets in relation to the investigation into whether or not Isabel is guilty of the money laundering and embezzlement charges against her. Now, Isabel is calling for her assets to be unfrozen and claiming that Angola's Luanda Civil Court and Supreme Court used fabricated evidence against her. She claims the courts colluded against her and insists the charges aren't true. She said the fabricated evidence against her included a forged passport in her name, with her photos, but the signature of the late Bruce Lee. The courts have, as of this writing, not commented on dos Santos' claims.

Isabel dos Santos is a suspect in a criminal investigation into the misappropriation of funds from the state oil company, Sonangol. Isabel was appointed to head Sonangol, Angola's state oil company in 2016, while her father was still president. (He retired in 2017 after 38 years.) While Isabel was at the helm of Sonangol, she allegedly transferred $57 million in November 2017 from Sonangol's accounts to a bank account in Dubai for the company Matter Business Solutions. That company just so happens to be run by Paula Oliveira, a close friend of Isabel's. Oh, and the Sonangol bank account the money was transferred from was a EuroBic account. At the time, dos Santos owned 42.5% of EuroBic. The bank is severing its ties with her and any entity related to her. Her 42.5% stake is worth about $200 million. And that's not all! Angolan authorities are also investigating the transfer of $115 million in consulting fees which she authorized while running Sonangol. 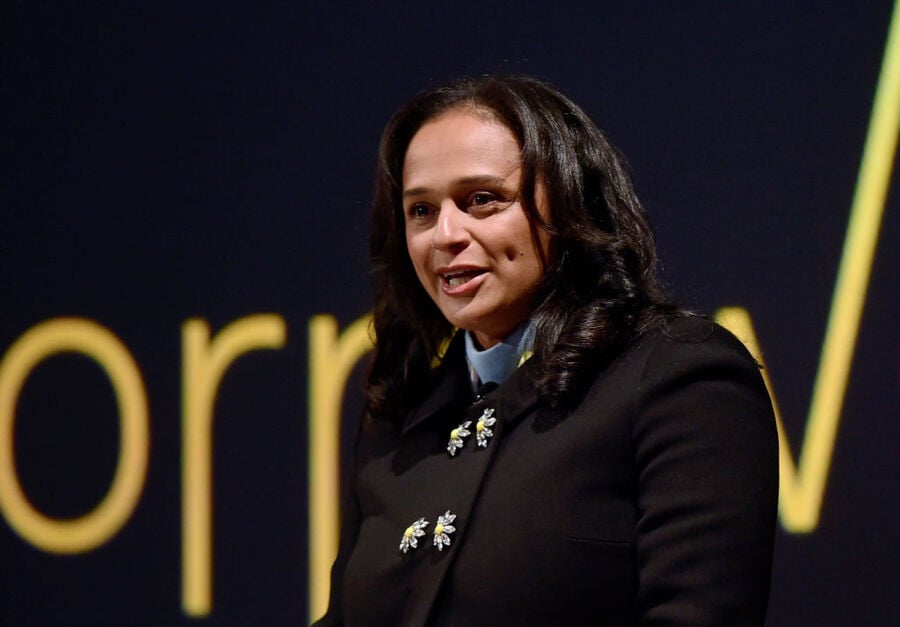 For the record, Isabel was removed from her post as head of Sonangol in 2017 by her father's successor, President João Lourenço.

It wasn't all that long ago, we heaped praise on Isabel dos Santos. She was a self-made female billionaire. She is a person of color. She comes from an African nation steeped in poverty. She was the richest woman in Africa. She had a net worth of $4 billion (today its $2 billion) that she gained on the merits of hard work – or not. Some things have come to light that forced us to rethink our stance on Isabel. We knew she was the daughter of a controversial and corrupt president and nepotism surely played at least a small role in her success. But it turns out it was the reason for her success.

In mid-January, the Attorney General of Angola held a press conference to announce that Isabel dos Santos has been charged with embezzlement and money laundering. Additionally, EuroBic, a small, privately-held bank in Portugal, in which she was a significant shareholder, issued a statement saying that dos Santos' stake is being sold. She owned a 42.5% stake in the bank. The bank is severing its ties with her and any entity related to her. Her 42.5% stake is worth about $200 million.

Isabel is claiming that this is a politically motivated attack. Then, the 700,000 leaked documents known as the Luanda Leaks revealed that dos Santos and her husband were allowed to buy a number of valuable state assets in a series of seriously shady deals. The Luanda Leaks were obtained by the Platform to Protect Whistle-blowers in Africa and shared with the International Consortium of Investigative Journalists.

Isabel took to Twitter to blast the reports, claiming that it was "based on fake documents and false information, it is a coordinated political attack in coordination with the 'Angolan Government'. 715 thousand documents read? Who believes that? #icij #lies."

A week after her rebellious and angry tweet, Angola's Attorney General announced that dos Santos was also accused of mismanaging and embezzling $1 billion during her time at the head of Sonangol.

Isabel has also referred to the litigation against her as a witch hunt. Her husband, Sindika Dokolo told Radio France International that the Angolan government is wrongfully targeting him and his wife.

"They want to blame us for all the corruption and bankruptcy in Angola. We pay taxes in Europe, and we're Angola's biggest tax contributor. We've worked and invested a lot in this country, more than many others."

It gets worse: Nuno Ribeiro da Cunha, an employee of EuroBic who managed the Sonangol account and was also charged in the case against dos Santos was found dead in Lisbon in January 2020 the day after the charges came out. Authorities report that he likely committed suicide.