From Dirt Poor Korean Orphan, To Billionaire Co-Owner Of The Buffalo Bills: The Inspirational Story Of Kim Pegula

It was Christmas Eve, 1974, when Ralph and Marilyn Kerr got the call. The couple had two biological sons of their own and had begun the process of trying to adopt a child from overseas nine months earlier. Kim (Kerr) Pegula was their Christmas miracle. The then five-year-old was in an orphanage in Seoul and she could not have had any idea of what the future held for her.

The entire Kerr family flew to New York City from their Rochester, New York area home to meet Kim. When they were introduced, Kim was wearing a winter jacket and carrying a small bag with an extra pair of shoes in it – all she had in the world up until that point. Her birth parents had left her on a street corner in front of a police station. This is what Korean parents did back then when they felt they could not care or provide for their children. Kim has no recollection of her life before she was adopted. 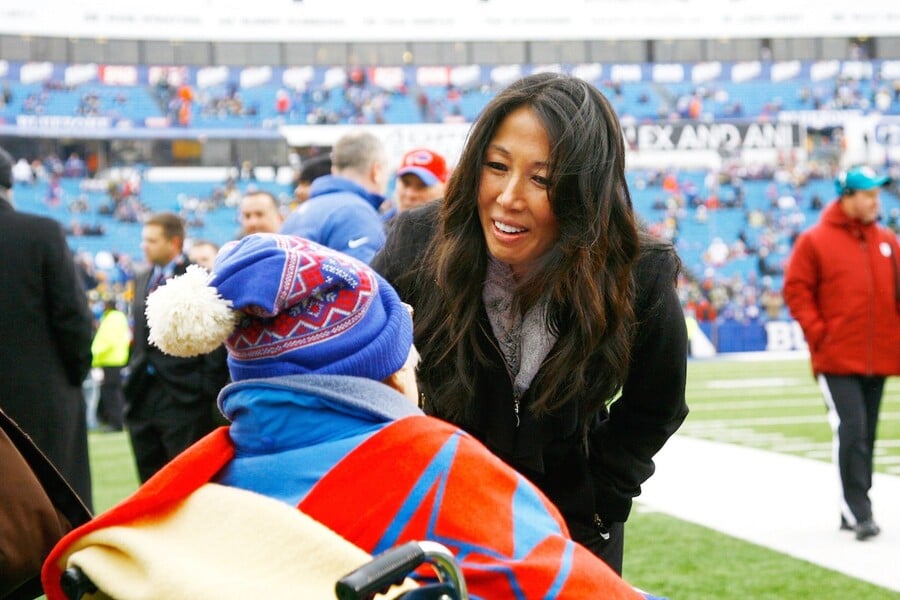 Kim Pegula was wearing rags when she was left on that street corner in Seoul so long ago. Now she and her husband Terry Pegula co-own the Buffalo Bills and Sabres, are largely considered local heroes in Buffalo, and have a net worth of $4.6 billion. This is the literal rags to riches story of Kim Kerr Pegula.

Kim's adoptive parents, Ralph and Marilyn Kerr, were born and raised in Canada. They moved to the U.S. after they were married. Ralph worked for the Salvation Army as a youth counselor. The couple was raising their two sons, Ralph Jr. and Gordon. Then, one day, Ralph saw an article in the Rochester Times-Union about a couple who was adopting a child from Korea. He and Marilyn discussed it and thought, why not us?

When Kim was adopted by the Kerrs, she could not speak a word of English. However, when she was enrolled at Jefferson Avenue Elementary School a month after her arrival, she turned out to be a quick study. She was speaking English like a native within a couple of months.

Kim was a cheerleader for the local youth football team. She continued cheering in high school as well as was a flag girl in the marching band and played bassoon in the performance band. She was a typical American teenager. Not once did she ever think about who her biological parents were, nor did she ever have a desire to look for them.

The Kerrs moved to the town of Cortland, New York just before Kim's senior year in high school. Her father had recently completed his PhD at Syracuse University (after years of study in night school) and took a job as a school administrator.

Kim followed her brothers to Houghton College, a Christian liberal arts school in southwestern New York where she studied broadcast journalism. However, a happenstance meeting with Terry Pegula during her senior year in college would change the course of her life yet again.

Kim and her college roommate Angie had a plan to go to Alaska and work at a fishing camp. Kim had heard there was lots of money to be made there. They needed cash to get to Alaska so they were spending the summer in Olean, New York, working to save money while living in Kim's parents' vacation cottage. The two young women were at the Old Library Restaurant filling out applications when Terry Pegula and a handful of his employees walked in for lunch.

Kim and Terry struck up a conversation. Terry gave Kim his business card and told her to call him if she was ever back in town. Kim called the following week and left a message and then pretty much forgot about him. A few weeks later she graduated from college. After that, she went back to Olean to interview at the local public television station and out of the blue, Terry called her. They went out a few times and he offered her a job in communications and marketing at East Resources. Kim called off the Alaska trip.

One of Kim's coups while at East Resources was getting Terry the cover story of the American Express monthly magazine. The 1992 story covered Pegula's fast rising company and in it, Terry mentioned that one of his dreams was to own a pro sports team.

Kim and Terry dated for a year before Terry went to Ralph Kerr to ask for his daughter's hand in marriage. Kim's parents had their reservations. After all, Terry was 18 years older than Kim, divorced, with two children. But Kim felt like she and Terry were meant to be. 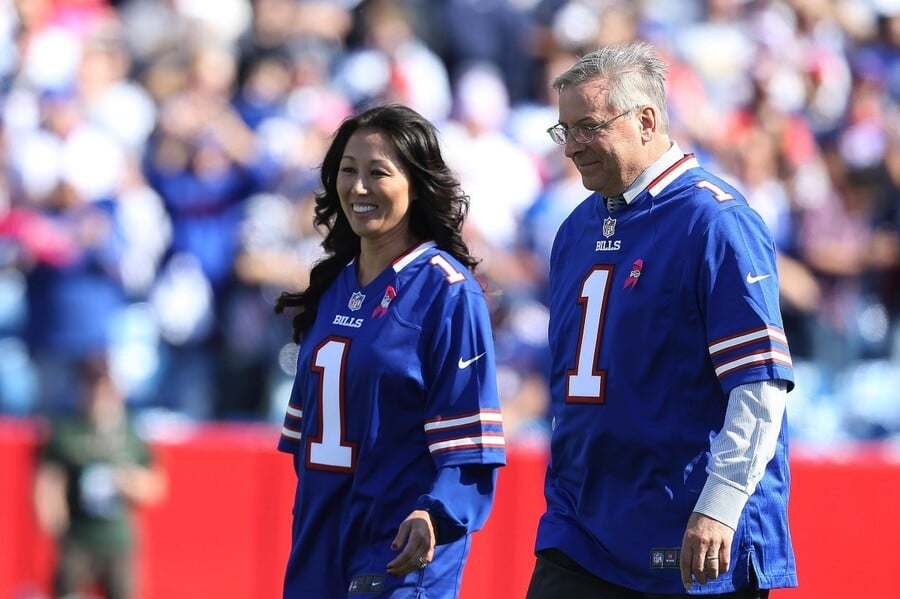 Pegula is a self-made businessman who founded a small natural gas and oil drilling company in the early 1980s and sold it in 2010 for $4.7 billion. The sale provided the seed money needed for his second career as a sports tycoon. Pegula Sports & Entertainment owns the NFL's Buffalo Bills, the NHL's Buffalo Sabres, the Rochester AHL team the Americans, the Buffalo Bandits indoor lacrosse team, a country music label and recording studio, and the HarborCenter complex in Buffalo. HarborCenter includes two hockey arenas, a hotel, and sports bar in downtown Buffalo across the street from the First Niagara Center, where the Sabres and Bandits play.

The Pegulas have been married for 22 years and have three children of their own – Jessica (21), Kelly (19), and Matthew (16). When the children were young, Kim stayed home to raise them. However, as they've grown up, she's taken on a more and more active role in the family business. When Terry sold East Resources and bought the Sabres, Kim was all in.

The Bills were looking for a new owner after long-time owner Ralph Wilson died in March, 2014. His wife Mary was not interested in running the NFL franchise and wanted to sell it. Terry was well aware of how much the team meant to western New York, but he had no intention of bidding on the team unless Kim was ready to play a major role in running the franchise. It was too big for Terry to handle on his own and he admits Kim has a better head for the fiscal and marketing sides of running the team. The Pegulas purchased the Buffalo Bills for a record $1.4 billion in October, 2014.

The Pegulas became Buffalo's first family with the purchase of the Bills. They are regarded as saving the beloved franchise from the likes of other interested buyers such as Jon Bon Jovi, Donald Trump, and others who threatened to move the Bills out of western New York.

Kim feels that this was what she and Terry were meant to do. Her adoptive parents taught her the importance of doing the right thing and giving back. Buffalo is a Rust Belt city that lost half of its population in from the first half of the 20th century to the second half. Kim Pegula is among a handful that are at the forefront of bringing Buffalo back to life.

As soon as Terry and Kim bought the Bills, Kim was asked to sit on the board of the NFL Foundation, a non-profit organization dedicated to improving the health and safety of sports, youth football and community. The committee is chaired by Charlotte Jones, daughter of Dallas Cowboys owner Jerry Jones.

As Kim settles into her role as co-owner of the Bills, it will be interesting to watch how she shapes the organization and the NFL as one of the few women with real power in the NFL.

From an orphan dressed in rags to billionaire co-owner of the Buffalo Bills and one of the power players in the NFL, Kim Pegula's life story has just begun, and it is already been a fantastic journey.