By Amy Lamare on March 6, 2020 in Articles › Billionaire News

The estate located at 11101 Chalon Road in Bel Air is rather infamous for the fact that construction costs are rumored to be more than $300 million, as well as the fact that it is said to be intended for Qatar's Royal Al Thani family. Sitting on an eight-acre hilltop in Bel-Air, the property contains a still-under-construction 77,000-square-foot home designed by Peter Marino. The property also has a 10-bedroom guest house for staff and security as is befitting of the needs of a royal family. This mansion also comes with one of the highest property tax bills in Los Angeles County: $1.03 million per year. This home is still under construction as of this writing.

The property has been tied to billionaire private equity guru Thomas Barrack, Jr. Barrack is the person who filed plans for the Chalon Road mega-mansion in 2014. However, it turns out the CEO of Colony Capital is not the true buyer of the property. He's just the frontman for the Al Thani family.

Here's a photo of the house from when it was under construction, courtesy of Bing maps: 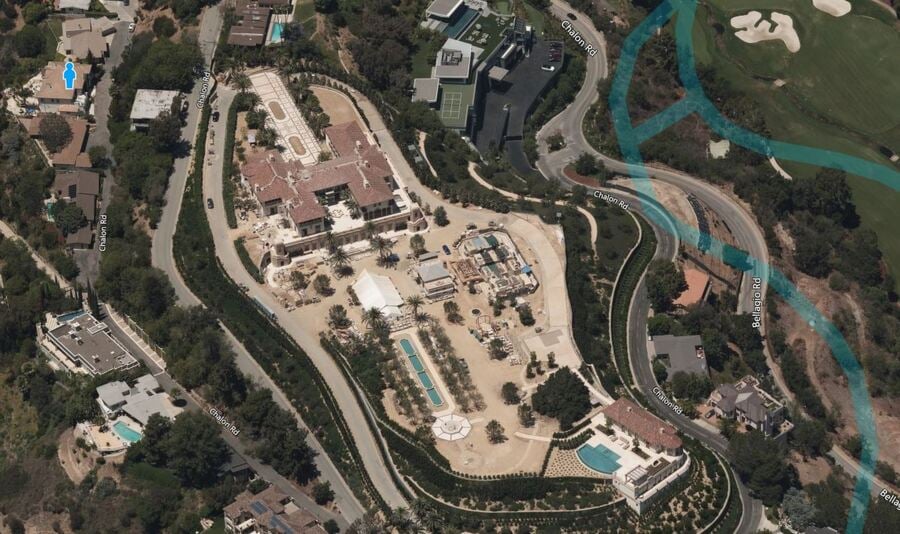 The land sits right above the Bel Air Country Club. It was purchased for $35 million in 2010. It features 360-degree views of the Pacific Ocean, city lights, and mountains. Permits filed with Los Angeles' department of building and safety reveal that the Chalon Road project will include a pool, spa, cabana, and tennis pavilion. Barrack has strong ties with investors in the Middle East, including the Royal Al Thani family. In 2011, Barrack worked with the Qatar Investment Authority, the sovereign wealth fund that's overseen by the royal family to purchase Miramax Films and some of its assets for $600 million.

Here's a drone video of the completed mansion:

Barrack is the grandson of Lebanese immigrants to Los Angeles. He's built his billion-dollar fortune buying out-of-favor assets including $200 million in real estate in the Middle East and $534 million in non-performing German real estate loans. He also bought Michael Jackson's Neverland Ranch and made a $24 million loan to photographer Annie Leibowitz. Barrack is perhaps best known as a strong supporter and friend of President Donald Trump. He created a Super PAC in 2016 which raised millions to support Trump's candidacy. Once he was elected, Barrack chaired the Inaugural Committee and oversaw the preparations for Trump's January 2017 inauguration ceremony. Barrack and Trump have known each other since the late 1980s when Barrack helped Trump seal the deal to buy the Plaza Hotel in New York for nearly $410 million.

Barrack, who is fluent in Arabic, intervened on behalf of the Al Thani family in 2015 in a dispute over the ownership of London's Claridge's Hotel. Barrack got into a bidding war with David and Frederick Barclay and emerged victorious, purchasing the hotel's debt for $85 million. Then, Sheikh Hamad bin Khalifa Al Thani and his son Jassim bin Hamad bought the hotel for $2.4 billion.

Sheikh Hamad bin Khalifa Al Thani has 24 children with three wives. One of his sons made headlines locally when he took his bright yellow Ferrari for a little drag race on the streets of Beverly Hills. After that brouhaha, the Sheikh's son fled the U.S. on the grounds of diplomatic immunity.