Nepal's first and only billionaire, Binod Chaudhary, made his billions from his company Wai Wai Noodles. Now he is trying to use his noodle to figure out a way to save his country from the devastation of the earthquakes that shook Nepal to its core in April and May.

Those two earthquakes caused catastrophic disaster. In the ensuing months, there have been hundreds of aftershocks. Nepal is a nation in shock. And the coming monsoon season promises to threaten an even bigger part of this nation's foundation and leave thousands of citizens vulnerable.

Chaudhary is Nepal's most famous businessman. He is the founder of the massively successful Chaudhary Group, which owns interests in everything from banking, cement, real estate, hotels, power, retail, biotech, and electronics. But regardless of how diverse his empire is today, the majority of his initial wealth came from one product. A product that is a staple of pretty much every lunch and dinner in Asia.  Noodles. Lots and lots and lots of noodles.

He has been vocal in the months since the earthquakes about the plight of his country and the best way to help Nepal recover. So far, he has donated $2.8 million of his own money to the recovery and has pledged a total of $12.5 million to the crisis. Now he's urging private individuals to step up and donate to Nepalese recovery.

"Homes can't wait, schools can't wait. This is where the private sector like ourselves come in. We can ensure resources are optimized with an immediate on-the-ground response," he said.

Nepal was hit with two earthquakes measuring 7.8 and 7.3 on the Richter scale. The shakers caused about 8,600 deaths, destroyed 500,000 homes, and left 2.8 million people in serious need of humanitarian aid in the Himalayan country. One million children are not in school due to damaged or destroyed classrooms.

The Nepalese government has been slow to take up the cause of its own country. Funds sent to set up earthquake relief were deposited instead into the prime minister's own relief fund. It has been widely reported and caused widespread skepticism about where exactly funds donated are going.

Even goods that were shipped to Nepal for aid have been stockpiling at the airport for weeks and weeks due to Nepal's antiquated customs inspections, which they refused to suspend, even with their country in crisis. Many charities and nonprofits have now stopped sending help because they are not sure their funds are going to the right places – the people, the homes, the schools, the hospitals. 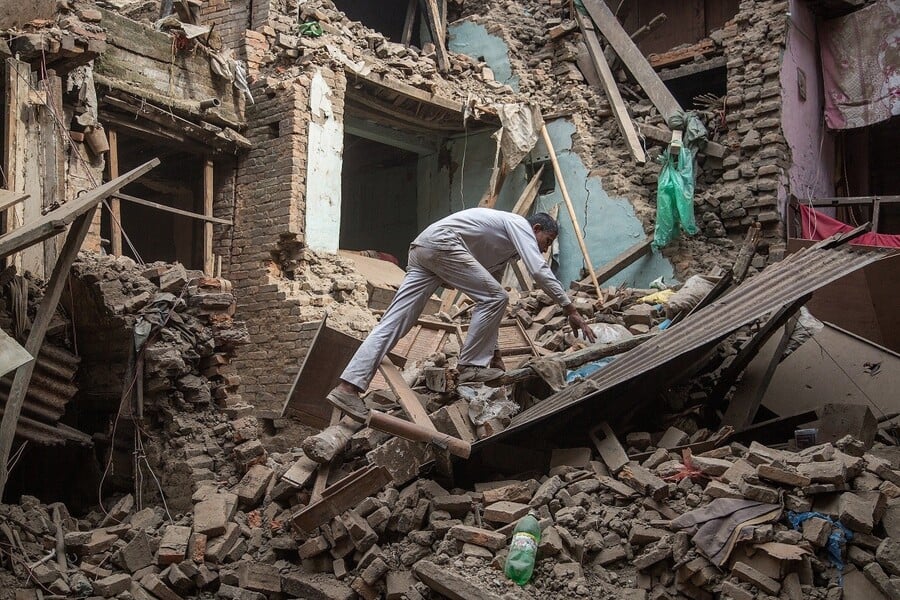 Chaudhary believes that the private sector needs to step up and provide immediate relief in the case of natural disasters. He believes that individuals who can liquidate assets and make decisions faster than a government tied up in its own red tape can provide the most help to a nation in need.

Chaudhary has a net worth of $1 billion. The 59-year-old father of three discovered the road to his fortune during a vacation to Thailand. His Wai Wai Noodle brand has two percent of the global market share of ready to eat noodles today.

For Chaudhary, noodles were just the start. When the Nepalese Civil War began in the 1990s, he quickly realized the need for global diversification. So Binod set out to create the first Nepalese multi-national. Nepal's first billionaire made a huge amount of his money overseas through a chain of luxury hotels in India and properties in the UAE, which began when he traveled to Dubai to negotiate a controlling stake in Nepal's Nabil Bank.

Chaudhary built his fortune carefully, planning every step of the way. However, no amount of planning could have prepared him for the earthquakes. When the quake hit, Chaudhary was outside of Kathmandu in the Chitwan area with two of his three sons. His company's headquarters were crumbling, operations had to be moved to less damaged buildings, many of his employees had to sleep outside – but none of them were killed.

It took three days for Chaudhary, and his middle and top management to get organized and spring into action. The distributed $300,000 worth of water, medical supplies, blankets, foods, and of course, Wai Wai noodles. They then set out to rebuild homes and schools.

The Chaudhary Group has now moved on to the third phase of its relief efforts – rebuilding. The company is rebuilding 1,000 transitional homes that cost $750 and take eight days to construct as well as 100 primary schools in Kathmandu, Lalitpur, Bhaktapur, and Kavre.

Chaudhary has called on his rich friends to help out as well. Chinese billionaire and founder of Alibaba, Jack Ma, has pledged to build another 1,000 transition homes in the areas most deeply affected by the earthquakes.

Chaudhary won't stop until Nepal becomes the country he has envisioned. He sees the rebuilt Nepal as a country that can compete globally as a strong economy. He wants his country to be seen as a good place to invest in. He wants Nepal to be free of the corruption and bureaucracy of its current government.

He said: "I am a small man from small country, but I have big dreams."

Binod Chaudhary built a billion fortune on the strength of an idea that just adding water to dried noodles should provide a meal for a good price. If I were a betting person, I'd lay odds on his vision for Nepal.